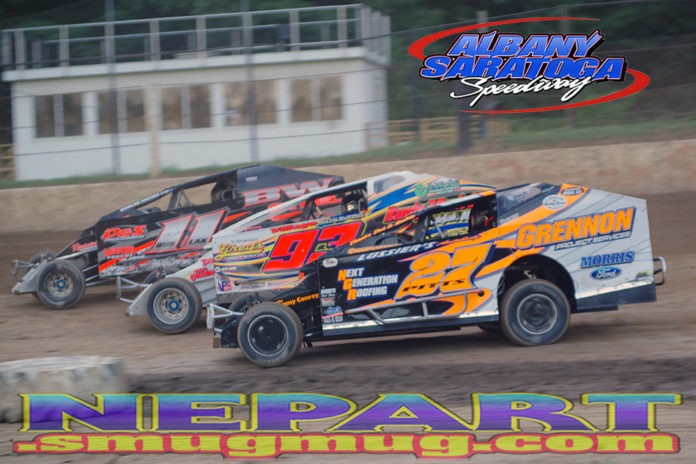 MATLA, NY – “Big” is the word for the 2017 Albany-Saratoga season.  Promoter Lyle Devore is “hoping for big things this season” and every indication is that Devore will get what he hopes for.

One thing is evident after Friday night’s practice session at the three-eighths mile oval located in Malta, NY–with over 160 cars on hand for practice, there will be big car counts for weekly racing in all divisions.  Add to that some of the biggest names in Modified racing and several big shows including the Memorial Weekend Patriot Sprint special on May 26, Brett Hearn’s “The Big Show 9” on June 27, “Summer Showdown” on July 14, and “Stan Da Man’s 32 Night” on July 28, and Devore is certain to get the “big” season he is hoping for.

The track was in great shape Friday night and the great weather brought a large crowd that came out to watch the large car count take to the track.  Defending Modified champion Marc Johnson looked fast in practice as he is “hoping for a year like last year.”  Last year Johnson proved to be one of the big names in the Modified division.  To repeat this year Johnson will have to hold off the likes of multi-time champions Brett Hearn and Kenny Tremont, as well as top shoes Ronnie Johnson, Matt Delorenzo and whole host of other hot shoes.

Returning to the speedway this year is local fan favorite Peter Britten.  The Aussie had other commitments last year and ran only three events at “The Great Race Place.”  This year Britten is driving for former track champion and Hall of Fame driver Andy Romano in a potent Troyer.  “The track was good tonight and the car felt good. I really like it here and I always have fun,” said Britten.

Mike Parodi and Steve Ryan will try to defend their 4- and 6-Cylinder championships as the division will run 12 shows in 2017.  A large contingent of drivers will also be in contention each week in the Limited Sportsman division.

Albany-Saratoga Speedway will open the doors for the 2017 season on Friday night, April 21,  with a $3,000 to win Modified feature, 4-Cylinders and the Sowle Trailer Repair Series.  Racing begins at 7 p.m. with grandstand gates opening at 5 p.m. and the pit gate opening at 3 p.m.  For more information on Albany-Saratoga Speedway log on to www.albany-saratogaspeedway.com or check us out on Facebook and Twitter.-