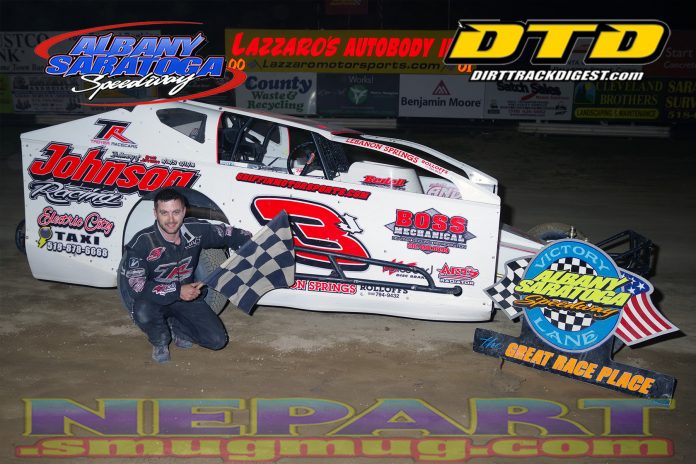 MALTA, NY – The weather in the capital district has finally been hot and so is defending Modified track champion Marc Johnson. Johnson made it two in a row at the “Great Race Place” using his trademark low line. “Unbelievable!” said Johnson. “Stewie is one of the best. The track was awesome.” Johnson also became the first repeat winner in the Modified division taking home the $3,000 pay day sponsored by Bart Contracting Company of Copake, New York.

After a fan chosen inversion gave Johnson the fifth starting spot, “The White Knight” made his way to the second position and began to stalk early race leader Danny Varin, who was subbing for Jeff Rockefeller.

From the 13th starting spot Stewart Friesen, making an appearance at Albany-Saratoga as his NASCAR Camping World Truck series schedule allows, made his way past Johnson and then to the race lead on lap 19. As Friesen worked his Halmar entry through lap traffic on the high side of the speedway, Johnson was able to duck low underneath and regain the lead for good on lap 28, scoring his 11th career win at the historic Malta oval.

Rocky Warner became the first repeat winner in the Sportsman division on Wednesday night. Warner took the lead from his sixth starting spot on lap 6 of the 25-lap feature and then held off the challenges of defending track champion Jeremy Pitts to pick up the $1,500 payday courtesy of Sowle Trailer Repair of Fultonville, New York. Connor Cleveland would settle for third with Chris Johnson and Jason Gray rounding out the top five.

In a wild Pro Stock feature Todd Hoffman seemed to have his first feature win in many years in hand until he was spun on the backstretch on lap 20. “Krazy” Kenny Martin appeared to take advantage and motor on to his third win of the season holding off Kim Duell.

However, at the conclusion of the race it was announced Martin had been penalized two spots for spinning Hoffman, handing the $500 check from Marcy Mangino’s It Works! Network to Duell. Walt Brownell would finish second, Martin third, defending track champion Robbie Speed was fourth and Chucky Dumblewski rounded out the top five.

Randy Miller became the first repeat winner with a Street Stock victory in a 20-lap feature that was cut thee laps short due to a rash of yellows in the closing laps of the event.

Albany-Saratoga will return to action on Friday night, June 16, with the “Hoosier Daddy” Father’s Day Special featuring the DMA USAC Bear Ridge Midgets, as well as all divisions in action. Pit gates open at 4 p.m. Grandstands open at 5 p.m. Racing begins at 7 p.m.

Just a reminder to All Media Members: All media members, including those with DIRTcar and Albany-Saratoga Speedway credentials, must complete the “Credential Request” form that may be downloaded at www.thebigshow9.com. Deadline for credential requests is June 20.

For the 2017 schedule and up-to-date Albany-Saratoga Speedway information be sure to visit: