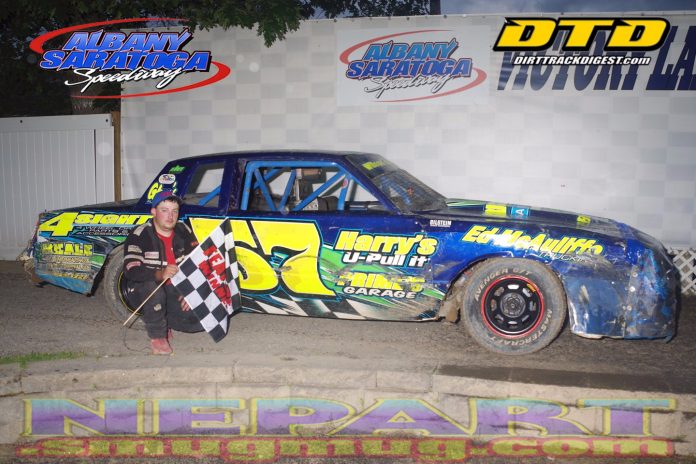 MALTA, NY – Joey Wilson won his first career Street Stock feature on Friday night at Albany-Saratoga. Wilson got out to the early lead and had to hold off Randy Miller who started 11th and worked his way to second in the early going. Miller tried to get around Wilson but the two made contact and Miller went pit side with a flat tire.

During the final lap of the 20-lap Street Stock feature, at about 8:30 p.m. rain started falling on the speedway. After a steady downpour for about five minutes, track officials were forced to postpone the rest of the evening’s feature due to the time it would take to dry the track. In addition, another round of showers was predicted for the area just an hour later.

Earlier in the evening 66 bikes were raffled off to children. The bicycles were donated by various race teams, fans, sponsors, crews and officials. Children were allowed to enter their name in the drawing for the bike of their choosing. After the bikes were awarded, the children, along with many of the people who donated the bikes, were allowed to parade their winning bikes in front of the main grandstands.

The makeup dates for the rained out features will be announced at a later date. Log onto www.albany-saratogaspeedway.com for further information.

Coming up on Tuesday, June 27, at the Albany-Saratoga Speedway is Brett Hearn’s “The Big Show 9,” part of the Super DIRTcar Series. Pit Gates open at 3 p.m. Grandstands open at 4 p.m. A driver autograph session will take place at 5 p.m.

General admission for adults is $25. Children 11 and under are $2. Reserved seating will be $35 for the top two rows of the bleachers. VIP seating is available for $75 and $90.

“The Great Race Place” will be in action again on Friday, June 30, with a massive fireworks display to celebrate the Independence Day Holiday. It will be”Military Night’ at the speedway and the “Featherfoot Pro Stock Series” will be in action along with all divisions. 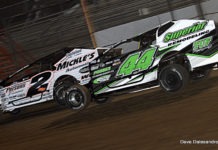 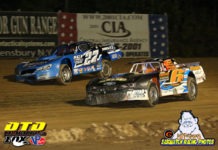 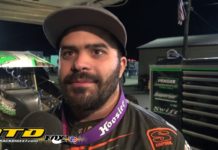