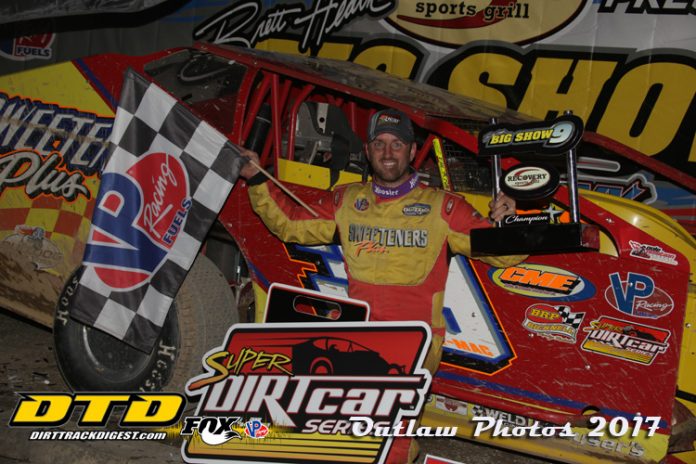 MALTA, NY – Larry Wight took the lead from Stewart Friesen on a lap 74 restart, but Tim McCreadie pounded the cushion to go from fourth to the lead on lap 77. McCreadie then led the final 23 laps of Brett Hearn’s Big Show 9 to claim the $10,000 winner’s share at Albany-Saratoga on Tuesday night. It was McCreadie’s first win since he won at The Dirt Track at Charlotte in November 2011.

Friesen took second and Matt Sheppard took third from Larry Wight when he jumped the cushion late in the race and had to settle for fourth. Hearn rounded out the top-five.

“I’ve been trying to run this race for a while and take some of Brett’s money,” McCreadie said, tongue-in-cheek following his first Super DIRTcar Series win since 2011. “He always makes more than us and it’s nice to take $10,000 from him once and a while.”

Wight started on the front row with Max McLaughlin for the 100-lap Feature. Wight drove his No.99L to the point position at the drop of the green flag while Stewart Friesen raced into second from the third starting spot.

McCreadie was quickly on the move from his sixth starting spot and used the same outside lane to take second from Friesen at lap 17. Twenty laps in, Wight found his way into heavy lapped traffic as the race stayed green. At lap 22, Friesen took second back from McCreadie while Wight was able to race freely through the traffic.

Friesen caught the leader on lap 42 and passed Wight to take over the lead on lap 46. Friesen held the point just as the first caution of the race waved at lap 50 when Rich Scagliotta got turned around in turn two.

When the race restarted on lap 59, Friesen held off Wight’s charge while Sheppard took third from McCreadie. The top-five maintained their spots, with Hearn in fifth, until the second and final caution at lap 68.

The final restart with 74 laps complete produced all the action at Wight retook the lead from Friesen in the outside lane while McCreadie made his move from fourth to second before taking the lead three laps later.

“I couldn’t really hit the bottom at all and when we had cold tires we could roll the middle pretty well,” Wight said. “It seemed to be that if we got too much heat in the right-rear, the car went away on us. I don’t know if it was me being too hard on it or if we just need to do a little more work on the car itself to get it to run with that hot tires.”

Before Wight could worry about getting too much heat in the right-rear tire, McCreadie used the outside lane to drive to the lead.

“I just got lucky,” McCreadie said in Victory Lane. “Those guys were hunting the bottom and I had been up there banging the cushion for probably 70 laps and I just figured the only shot I had was to try and go in above it into (turn) one and it happened to stick. It could have easily went the other way, but we’re happy tonight.”

With eight laps to go, Wight jumped the cushion while running second and fell to fourth as both Friesen and Sheppard raced past him. Friesen caught McCreadie over the final five laps, but couldn’t get close enough to regain the top spot for the win.

“Our Halmar car was good on the long run, which is cool,” Friesen said. “It’s something we haven’t really had all year. Second to a guy like that, I mean there aren’t too many guys that can run a curb like that and put it where he needed. We’ll take a good second. We had a great long run car and it was good. I’m proud of everybody.”

“I didn’t know how many laps were left, but I saw him poke (the nose) once or twice,” McCreadie said of Friesen’s late challenge. “It was really kind of dusty once you caught lapped traffic. It wasn’t that you couldn’t maneuver, I just couldn’t really see through the center of the corner to put my right-rear on the cushion so it slowed my entry down and my whole corner down.”

Sheppard held on for a third-place finish, his third straight top-five finish and fifth consecutive top-five result to start the season.

“We had a really good car there in the middle of the race,” Sheppard said. “We really didn’t need that lap 68 caution. I was just rolling by Larry Wight for second and I don’t think anybody wanted to be third on that next restart. Timmy was third on the restart before and that’s how I got by him. Then I got pinned down there and just lost some ground. I started rolling again there at the end, but it was too little too late.”

Wight was happy to earn a top-five finish, but naturally would have preferred to hold on for the win. Mostly, Wight was surprised McCreadie was able to use the outside lane to take the win.

“I never thought anyone could get the top to work with it that far out and as nasty as the cushion was, but he must have been free enough where he could lean on it,” Wight said. “It seemed to be that if I went up there it would pull the nose and the car was a handful up there.”

Erick Rudolph was the 811 Dig Safely New York redraw bonus eligible driver as the eighth starter. He raced to a sixth-place finish in the Feature event. Pat Ward, who raced to an 11th-place finish, was the Pole Position Raceway Fast Qualifier. Series driver Peter Britten received the Speedy First Aid Hard Luck award after he was the first car out of the race at his home track.

The Super DIRTcar Series returns to action at Utica-Rome Speedway on July 2 for the New Yorker 100. For additional event information, visit www.uticaromespeedway.com. 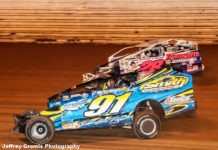