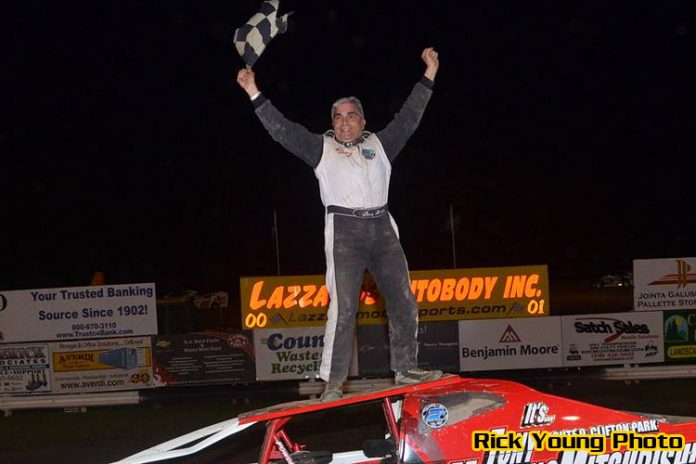 MALTA, NY – It has been over nine years since Don Ronca was in victory lane at Albany-Saratoga. That drought is over and he is $4,000 richer to boot.

Ronca dedicated the win to his late brother Mike a former competitor at the track who passed away. “Everything we do is for Mike He is in our hearts and minds.” In celebration, Ronca did a backwards victory lap around “The Great Race Place.”

While Ronca started on the outside of the front row alongside side Elmo Reckner a host of heavy hitters started deep in the field due to heat race troubles. As often happens, the cream always rises to the top

Stewart Friesen started 28th in the 29 car field and when the checkered flag fell he was making a last ditch effort to get by Ronca for the win. Friesen would settle for second followed by Jessey Mueller who hounded Ronca for the lead late in the event. Point leader Peter Britten finished in fourth and Bodie Bellinger rounded out the top five. Marc Johnson would finish in sixth with Matt Delorenzo in seventh followed by Matt Depew, Demetrios Drellos and last week’s winner Kenny Tremont rounding out the top ten.


Another rough night for the speedway’s all-time winningest driver, Brett Hearn, as he slowed on the backstretch on lap 17 and dropped from the race. Hearn’s quest for 900 career wins is stalled at 898.

The point battle is starting to turn into a three man race in the Modified division between point leader Peter Britten and defending champion Marc Johnson. Britten holds a 22-point advantage over Johnson without having visited victory lane in 2017. Keith Flach is 32 behind with nine races left.

Scott Duell turned in a dominating performance in the 50-lap “Sowle Trailer Repair/Advance Auto Parts” Sportsman feature. Duell picked up a $3,000 check for his first win of the season in the Sportsman division and his first for the Dodson Construction team he joined in the off season.

Tim Hartman marched from 10th to second but had nothing for Duell, settling for second. Connor Cleveland charged from 16th to finish third. Cleveland’s finish, along with a 31st place finish by point leader Rocky Warner, allowed Cleveland to close within 14 points of the lead. Jack Speshock and opening night winner Adam Pierson rounded out the top five.

Chucky Dumblewski held off the charges of a fast closing Robbie Speed to win the ‘Sowle Trailer Repair/Advance Auto Parts” 50-lap Pro Stock feature at the $2,000 prize that went with it. Speed would have to settle for second with early race leader Dan Older finishing in third. Nick Stone and Kim Duell rounded out the top five.

For much of the middle stages of the race the top four cars of Wilson, Al Relyea, Randy Miller and Jimmy Duncan battled back and forth under a blanket for the top four spots. Wilson was able to wrestle the lead from Duncan for good on Lap 13. From there Wilson would hold off point’s leader Relyea, Miller and Duncan. Damon Anderson rounded out the top five.

Lou Torres picked his first career win in the Limited Sportsman division in only his second time in the car. Justin Buff finished in second with Rob Lanfear, Bobby Gage and Michael Wagner-Fitzgerald rounded out the top five.

Coming up next Friday night, July 21, will be the DIRTcar Pro Stock series along with Kiddie Rides and a makeup Modified feature from June 23. All divisions will be in action including the Greg’s Towing and Repair 4-Cylinder Division.