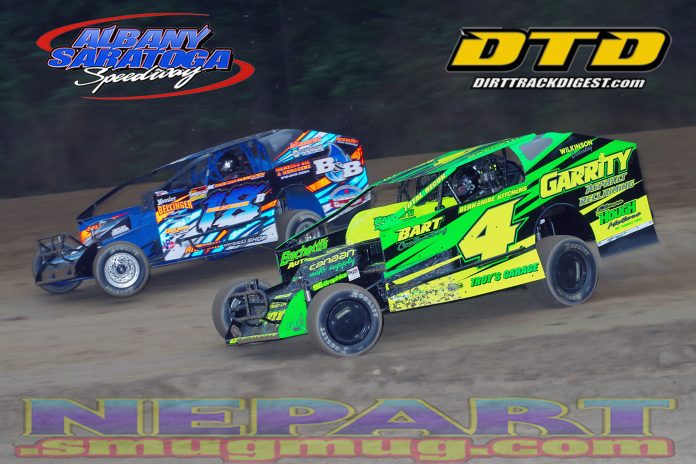 MALTA, NY – The ‘518’ region of New York is home to some of the state’s most successful dirt Modified venues – namely, Albany-Saratoga Speedway.

Albany-Saratoga’s racy four-tenths-mile layout will play host to Round No. 6 of the STSS Halmar International North Region paying $5,000 to win, $1,000 for 10th and $400 just to take the green flag for big-block/small-block Modifieds.

Recovery Sports Grill is on the web at www.recoverysportsgrill.com.


For the STSS debut at Albany-Saratoga, Modifieds will feature sail panels – a deviation from the typical windows utilized on Friday nights at the Lyle DeVore-promoted facility.

Joining the STSS Modifieds on the open-wheel doubleheader are the King of Dirt (KoD) Sportsman racing for a 30-lap, $1,000-to-win event.

A rain date is in place for Wednesday, August 16.

Complete rules, times, prices and general information for the ‘Stampede at ‘toga’ have been posted on the STSS website: http://bdmotorsportsmedia.com/stampede-at-toga-rules-prices-general-information/