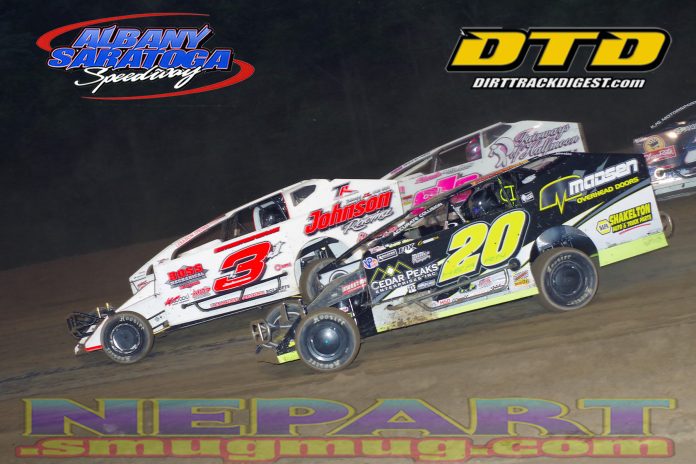 MALTA, NY  –   It has been an up and down season with only one victory for the speedway’s all-time winningest driver Brett Hearn.  On Friday night with extra money on the line on “Stan Da Man Night”  Hearn found the fast way around the Malta oval winning his second of the season, 130th at Albany-Saratoga and the 899th of his storied career, putting him one win away from the milestone of 900 career wins.

All features on Friday night were 32 laps in memory of Stan DeVore, father of track promoter Lyle DeVore and head of concessions Glenda DeVore.  Stan passed away after the 2016 season and his favorite number was 32.  Stan was a fixture at the speedway and known to many as “The Roaming Reporter.”

Hearn took the green flag in the “UpState GMC” 32-lap feature from the eighth position, after having a couple of DNF’s in previous weeks   From there Hearn worked his way into the top three by lap 11, using the high side of the speedway.  On Lap 12 early race leader Bobby Hackel went pit side handing the lead to Hearn. From there Hearn set sail opening up a lead of nearly four seconds.


Despite a few restarts in the closing laps of the event Hearn was never seriously   challenged and parked his Coplay Madsen Overhead Doors Teo in victory lane taking home the $3,200 prize.   Matt Depew would have a great run finishing in second. Ronnie Johnson finished in third with point leader Peter Britten charging from 22nd to finish fourth.  Kenny Tremont rounded out the top five.

JaMike Sowle picked up his first win of the season in the Sportsman division 32- lap feature.  Sowle took the lead on the first lap of the race and held off the challenges of Rocky Warner in the later stages of the race.  Sowle not only picked up the $320 bonus for winning the race but picked up a $200 dollar bonus for the fastest lap of the race, $100 for halfway leader, $320 for leading lap 27 and the $32 for each lap of the race lead.

Warner dogged Sowle for the race lead for much of the event but could not find a way past.  On a last lap restart Warner jumped the cushion in turn two dropping him back to fourth.  He recovered to finish third.  Jeremy Pitts finished in second with Chris Johnson in fourth and Tim Hartman fifth.

Robbie Speed won a wild 32-lap Pro Stock feature and the $320 bonus to go with it.  Speed who started sixth took the lead on Lap 11 when it appeared he and Kenny Martin made contact sending Martin around.  Speed would lead until lap 14 when he was sent around by Luke Horning in turns 3 and 4 giving the lead to Chucky Dumblewski.

Speed would go to the rear of the field and Horning was sent to the rear for his part in it.  Speed charged through the pack and blasted past Dumblewski at the white flag. Dumblewski would settle for second with Dean Charbonneau, Kim Duell and Chris Wemple rounding out the top five.

John Filarecki held off the challenges of Al Relyea Mark Burch and Randy Miller to capture his first win of the season in the 32-lap Street Stock feature.  In doing so picked up $320 for the win and another $320 for leading on lap 27.  Mark Burch grabbed the halfway bonus of $100.

Relyea finished in second with Damon Anderson getting up for third.  Randy Miller settled for fourth and Mark Burch finished in fifth.

Colin Clow picked up his first win of the season in the Limited Sportsman division.  Derek Bornt. Mike Block, John Stowell and James Meehan rounded out the top five.

Jared Powell picked up the win in the 4-Cylinder Dual Cam division and Will Ryan was the Single Cam winner.

Stan DeVore was certainly smiling down on “The Great Race Place” on Friday night as fans were treated to thrilling action in all the divisions. A host of sponsors, family members and friends put up several additional prize monies and contingencies in addition to the regular purses in all divisions.

The three modified heats won by Jessey Mueller, Ray Hoard and Brett Hearn each paid $320 to win courtesy of Grady Vintage Photos and a $100 bonus for leading Lap 25 by Frank Harper was collected by Brett Hearn.

A $100 hard charger award was put up for each division by Sowle Trailer Repair. Hard charger awards went to Peter Britten in the Modifieds, David Schilling in the Sportsman,  William August in the Limited Sportsman, Luke Horning in the Pro Stock s, Randy Miller in the Street Stocks, Will Ryan in the 4-Cylinder Single Cam, and PJ Bleau in the Dual Cam class.

M&J Construction awarded $320 to the leader on lap 27 of the Sportsman feature and that went to JaMike Sowle.  The same amount was offered by Red’s Rolloffs for the Lap 27 leader who was John Filarecki in the Street Stocks.

It was certainly a special night as Stan’s family was a part of the victory lane celebrations on “Stan Da Man Night” for every class.

Next Friday night will see the DMA USAC Bear Ridge Speedway Midgets make their second appearance of the year at Albany-Saratoga.  All divisions will be in action along with a makeup feature for the Pro Stock division and a Sowle Trailer Repair Sportsman race. 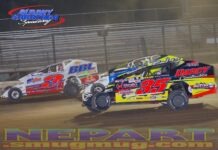 DeVore optimistic about 2021 season at Albany-Saratoga