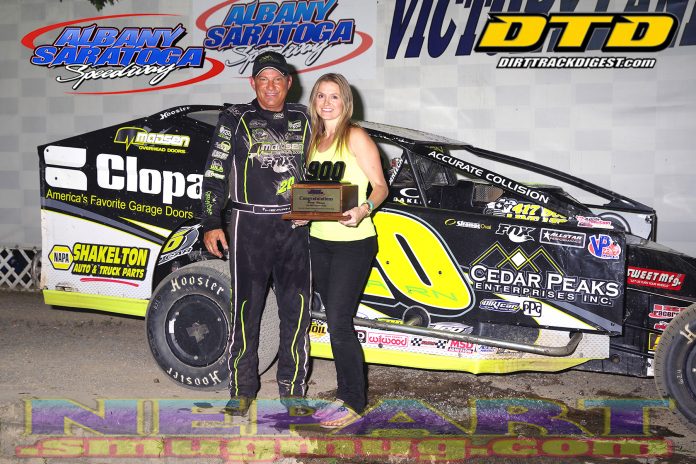 MALTA, NY – Brett Hearn reached a career milestone Friday night at the Albany-Saratoga Speedway. Taking the lead on lap 26 of the 35-lap Modified feature when leaders Marc Johnson and Jessey Mueller came together in turns three and four allowed Hearn to drive to his third win of the season, second in a row and 131st of his storied career at “The Great Race Place.”

In victory lane a jubilant Hearn said, ” A couple of my 900 wins came with a little luck and tonight might have been one of them.” Hearn was presented with a special trophy commemorating his 900 wins by track promoter Lyle DeVore and manager Marcy Mangino. Hearn was also joined in victory lane by his parents, and lifelong supporters, Kay and Gordon Hearn.

Twenty-six Modifieds took Rich Peterson’s green flag with Bobby Hackel IV and Brian Gleason on the front row. Hackel would take the early lead and stay there until lap 13 when Jessey Mueller slid underneath him in turn two. The two made contact, sending Hackel off the track and losing several positions.

Meanwhile, Hearn had a couple of troubles of his own going off the backstretch and coming back on the track on lap 15. Earlier he had made contact on lap 12 in with Mueller and got up to the against turn four wall.

Mueller would lead until lap 24 when he slipped off the backstretch handing the lead to defending champion Marc Johnson. Just two laps later in the middle of turn three and four Mueller dove under Johnson to try and take the lead. The two made contact and went into the wall, ending both their nights and handing the lead to Hearn.


From there Hearn held off Ronnie Johnson for the win. Johnson would settle for second with Keith Flach in third. Neal Stratton and Kenny Tremont rounded out the top five.

The Sowle Trailer Repair Sportsman feature saw a thrilling finish with a restart with two laps to go. Alex Bell held off the challenges of Andrew Buff to win the feature. However, he was disqualified in the post-race inspection giving the win to Buff, his first career win. That moved Robert Bublak up to second, Scott Duell to third, Brian Pessalano to fourth and Ken Conroy rounded out the top five.

In the makeup feature for the Pro Stock division, it was Kenny Martin taking the lead on Lap eight and then reclaiming it on Lap 15 and pulling away from the field to pick up his third feature win of the season. Dave DePaulo would finish in second with Kim Duell finishing in third. Luke Horning and Eddie Thompson rounded out the top five.

In the nightcap for the Pro Stocks, Kim Duell drove his “It Works, Curtis Lumber Wagon” no. 14 to victory lane in a wild race. It was his 20th career win at the Malta oval. The Pro Stocks were using the top, bottom and middle of the track to try and get to the front including and Nick Stone was using the extreme outside. When the dust settled it was Duell edging Brandon Emigh for the win. Kenny Martin finished in third with Nick Stone in fourth and Jason Meltz rounding out the top five.

Seth Carlson took the early lead and outdistanced the field to win the 20-lap DMA USAC Midget Feature. Adam Whitney finished in second. Johnny Heydenreich was the star of the show coming from 12th to finish third on the final lap. Derek O’ Hearn and Dean Christensen rounded out the top five.

John Stowell picked up his first career win at Albany-Saratoga in the Limited. Sportsman division. Derek Bornt was second. Paolo Pascarella was third with Justin Buff in fourth and Ryan Harrison in fifth.

Next Friday night the CRSA Sprints make their lone appearance at Albany-Saratoga. The Meltz Lumber Street Stock event will take place along with all divisions in action, including a makeup feature for the Limited Sportsman from June 23.