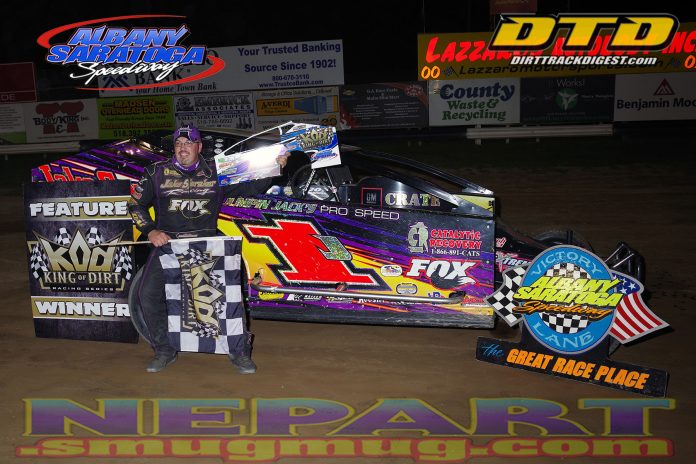 MALTA, NY – Rocky Warner has won just about everything possible in Sportsman Modified competition. One thing that has eluded him in his illustrious career would be a DIRTcar Sportsman Series title or the Mr. DIRTcar Sportsman crown. Earning the King Of Dirt Racing Sportsman Series title in 2017 would get him closer to achieving that goal, which had the ‘flying squirrel’ in winning form Tuesday night at Albany Saratoga Speedway.

Robert Bublak Jr. with his M&J Construction 27b and Chad Edwards driving the Spencer Racing 37 would lead the 30 car starting field to the green in the King Of Dirt Racing DIRTcar East Region Sportsman 30-lap main event at the great race place.

Edwards took the early lead, but was pressured quickly by Joey Scarborough. They’d battle closely until lap 13 when the red flag flew for DCI racing driver Jack Speshock who flipped hard in turn three. He was uninjured in the accident, but his evening was over.

Another red flag flew on lap 13 after Nick Lussier’s number 3 spun and collected a series of cars including Dirt Rush driver Scott Duell and visiting Vermont driver Richie Simmons who both flipped. They were uninjured in the accident and able to walk away, but their evening would come to an end.


On the restart Edwards and Warner went to battle for the top spot. These two drivers are also locked in a tight point race for the KOD/DIRTcar East Region Sportsman crown. Edwards would power his way back into the lead using the top side of the speedway leaving Warner to fend off the chargers of two-time Nationals champion Tim Hartman Jr.

A late race restart on lap 23 gave Warner the opportunity he needed, as heading into turn one he’d pull off a successful slide job and claim the top spot from Edwards. He’d try fighting back, but had his hands full with Hartman Jr. who drove by for 2nd and began pressuring Warner.

Nothing would deny Rocky Warner his 7th career feature win at Albany Saratoga Speedway and his 2nd on the KOD tour this season. Hartman Jr., Edwards, Cleveland, JaMike Sowle, Scarborough, Jeremy Pitts, Bublak, Jack Lehner, and David Schilling rounded out the top 10. Andy’s Speed Shop winner’s bonus went to Rocky Warner as well. Jack Speshock, Scott Duell, and Richie Simmons all flipped during the feature event. Thankfully they all were able to walk away uninjured. Saratoga Masonry Hard Charger, which is awarded to drivers top 12 who didn’t use provisionals, was Jeremy Pitts who rolled from 16th to 7th. Fast Axle super sixth award went to Joey Scarborough, while Jack Lehner earned the KillerCrate Newcomer Of The Race nod.