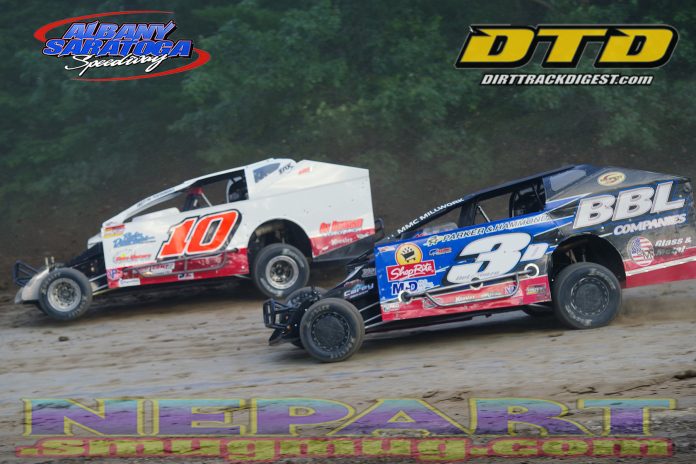 MALTA, NY – With just two points shows remaining for the Modified, Sportsman and Pro Stock divisions the crowning of the 2017 Albany-Saratoga Speedway Track Champions could very well come right down to the wire on Friday, September, 2.

The closest battle among the three divisions is the headline division, the Modifieds. Australian competitor, Peter Britten, made a return to the Malta oval in 2017 and has sat atop the point standings for a good share of the season. Britten, also known as “Batman,” holds a one point lead over Keith Flach.

Up until Flach’s victory on August 4, neither competitor had found their way to victory lane at “The Great Race Place” in 2017. Britten is still looking to get that win. Ronnie Johnson sits in third place in the standings. Johnson, the son of the legendary “Jumpin” Jack Johnson is only 20 points behind Britten.

Brett Hearn was eighth in the point standings just over a month ago and seemingly had no shot at the championship. However, Hearn captured his milestone 900th career win and has also strung together some top ten finishes. Hearn is 48 points behind Britten. With a little tough luck for the three drivers in front of him, and if Hearn can pick off a couple of wins he could possibly swoop in and steal the championship.

Either way, there will most likely be a different champion than in 2016. Marc Johnson, the defending champion, has run into a string of bad luck over the past month. Johnson was in second at that point and has now fallen to sixth, 57 points out of the lead. Like Hearn, he is capable of picking off a couple of wins. But to have five drivers ahead of him in the standings all have poor finishes in the final two races it would be a tall order for Johnson to defend his championship.


In the Sportsman class Rocky Warner, on the strength of three wins, sits atop the point standings with a commanding 50 point lead over Connor Cleveland, who has two wins of his own. It would seem with only two races left that Warner should have things pretty well sewn up. But a bad finish coupled with a top five by Cleveland could make the points chase go down to the final event.

Chris Johnson is in third 67 points behind Warner, and defending champion Jeremy Pitts who has yet to find victory lane in 2017 is in fourth, 92 points out of the lead.

In the Pro Stock division, Kenny Martin and Kim Duell have paced the field with three wins each including a win by Duell on August 11. That victory came down to a photo finish with Duell picking up the win over Martin via the position of the transponder on the car. Martin has a 41 point advantage over Duell and Duell will probably need Martin to run into some tough luck in the final two races to have a shot at the track championship.

The remaining divisions of the 4-Cylinders and the Street Stocks still have an additional two more events into September to settle their point battles. Al Relyea leads the Street Stock standings by 34 over Jim Duncan and in the 4-Cylinder Single Cam division. Will Ryan has a 46 point advantage over Alanna Jordan. Steve Ryan and P.J. Bleau are tied for the 4-Cylinder Dual Cam division lead with Ben Grant four points behind them. The Limited Sportsman do not keep points.

Friday night, August 25, at the Speedway is “Back to School Kids Raffle Night.” The raffle will give children a chance to win a backpack as well as kids racing apparel from many of the drivers at Albany-Saratoga. For the first time in what seems like forever, the weather forecast looks great. Get out and support your favorite race teams.

All divisions will be in action with the exception of the 4-Cylinder division. The Sportsman division will have double features as they make up a feature from June 23 and run a Sowle Trailer Repair event in the night cap. The Mohawk Vintage Modifieds will make their second appearance of the season.