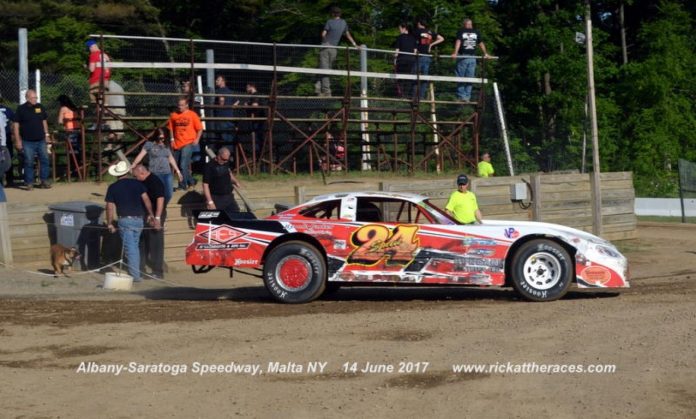 MALTA, NY – After extensive review of the DIRTcar NE penalty and subsequent appeal hearing by the DIRTcar Appellate Board regarding the July 28, 2017 crate engine violations by Pro Stock competitor Robbie Speed, Albany-Saratoga promoter Lyle DeVore and track owner Howard Commander announced today the speedway level penalties for that same violation will be in effect at both tracks effective Friday, August 25, 2017.

The motor in the Speed no. 24 Pro Stock was protested on July 28th, at which time the engine was pulled and impounded at the speedway, pending inspection. That inspection was done on Wednesday, August 2, 2017 at Hunt’s Machine (Schenectady, NY) with DIRTcar Technical Inspectors Ed Brassmeister and Mark Hitchcock present. Also reviewing the inspection were a representative of the protester and Albany-Saratoga Speedway.

The initial determination found the seal bolts had been tampered which indicates further mechanical inspection is required. Upon further mechanical inspection it was determined there were several internal modifications made including counterfeit seal bolts, after market timing chain, non-OEM connecting rod bearings, altered camshaft (reground), and extensive work done to the cylinder heads including intake and exhaust porting, value guide knurling and alterations in the combustion chamber of the cylinder head.

The initial penalty and included a one year suspension from all DIRTcar tracks and/or events effective 7/28/2017; competitor may apply for re-instatement 7/28/2018; loss of points and earnings from 7/28/2017 event; $3,500 fine or loss of motor to be paid before reinstatement to DIRTcar.

The DIRTcar Appellate Board review, petitioned by Robbie Speed, resulted in a reduced penalty, announced August 22, 2017, that permits Speed to return to competition January 1, 2018, modified the fine to $1,500 and required submission of the engine to DIRTcar for disposal.


“Albany-Saratoga and Lebanon Valley recognize the DIRTcar appeal process and revised/ reduced penalty,” stated DeVore. “At this time we will implement a penalty at the speedway level by the two tracks for this violation to include loss of all points earned during the 2017 season, all point fund awards earned during the 2017 season, and an indefinite suspension from participation as a car owner/driver/crew member effective August 24, 2017. This penalty is final and not open to discussion from any third party,” continued DeVore.

Commander, recognized as one of the most successful promoters of racing events throughout the United States, stated, “As gate keepers of this sport Lyle and I recognize the importance of the crate engine as a major factor in keeping cost such that everyone can afford to be involved as a car owner. We are committed to that and the rules as written in the DIRTcar Racing Rule Book and will not tolerate violations of this magnitude at these two tracks.”

DeVore added, “We want to maintain a high level of commitment to the DIRTcar rules, particularly as they relate to the integrity of crate engines. We will continue along the path we have chosen of technical inspections, penalties, fines, and suspension as warranted as we strive to maintain level playing fields and the integrity of the crate engine.”

For the 2017 schedule and up-to-date Albany-Saratoga Speedway information be sure to visit: