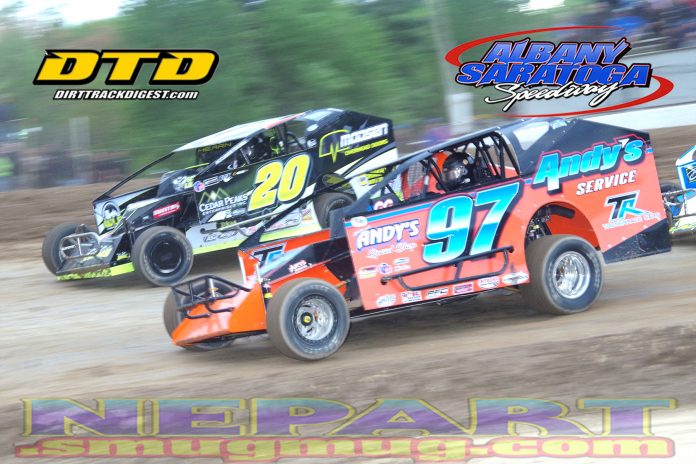 MALTA, NY – The final month of the 2017 racing season at Albany-Saratoga will kick off on Friday night September 1. On the line are the track championships in the Modified, Sportsman and Pro Stock divisions.

While the Modified division will run a regular 35-lap feature the Sportsman will run the final “Sowle Trailer Repair Sportsman Series” race of the season. They will crown a champion in both that series as well as the track champion. The Pro Stocks will run the “Featherfoot Warrior Series” as well as the crown a track champion. Also on the card will be the Limited Sportsman, 4-Cylinders, and Street Stock, divisions.

Fireworks will the fill the sky over “The Great Race Place” on Friday night. The Fireworks were originally scheduled for the 4th of July weekend however Mother Nature had other ideas. As a result, they are now going to be on Labor Day weekend.

Looking at the point standings in the Modified division, Peter Britten fresh off his win last Fri-day night holds a 15 point advantage over Keith Flach. Unofficially a fourth place finish by Britten would clinch his first track championship at the Malta oval.

In the Sportsman division, Rocky Warner holds a comfortable 54 point margin over Connor Cleveland. With only a 40 point margin between first and last place in the feature Warner has already wrapped up the championship.

In the Pro Stocks, Kenny Martin has a 38 point advantage on Kim Duell. Unofficially a 21st place finish for Martin would sew up the championship.