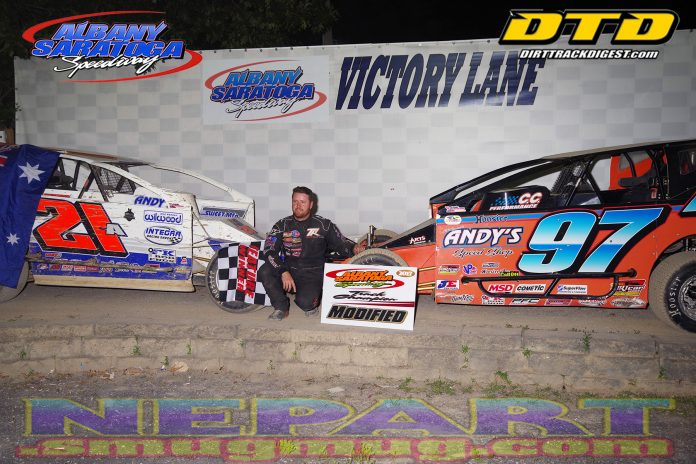 MALTA, NY – “Batman” Peter Britten put the exclamation point on the 2017 Albany-Saratoga Speedway Modified track championship by picking up the win in the 35-lap feature.

Starting from the 13th position Britten methodically worked his way to the front of the
field. With ten laps to go Britten moved into second place and began running down race leader Matt Delorenzo, looking for his first win of the season. As the race came down to the closing laps Britten began closing in on Delorenzo.

On lap 30, while in lap traffic, Britten who had been running on the bottom of the
speedway, shot to the outside in turns three and four and blasted into the lead as they crossed the line with four to go. From there Britten pulled away to his second win in a row and of the season. Delorenzo had to settle for second with Jeremy Wilder finishing in third and Jessey Mueller in fourth. Rich Ronca, the early race leader, rounded out the top five.

An elated Britten thanked all his fans and sponsors in victory lane. “The Romano’s are a
big name in this area. To race weekly with names like Hearn and Tremont among others is pretty awesome.” Britten now celebrates his first track championship on American soil after being a multi-time V8 Modified champion in his native Australian soil.

When the racing bug bit Andy Romano in the off season and he decided to return to the
car owner ranks, he phoned Britten to make the deal to drive for him in 2017 at Albany-Saratoga. Romano and his sons AJ and Mike both have been longtime competitors and winners at Malta and several other area speedways. Putting the deal together over the winter paid off for Romano.

Hartman had trailed track point leader and “Sowle Trailer Repair Series” point leader
Rocky Warner by 12 points going into the 25-lap feature. Warner’s night and “Sowle Trailer Repair Series” championship hopes came to an end on lap one as Ken Conroy and Chris Ronca came together in turn 4 on the first lap. Warner had nowhere to go other than into the wreck, damaging his 1j machine.

Although his “Sowle Trailer Repair Series” hopes were ended, he unofficially wrapped up the track championship for the Sportsman, as next week is show up points for that division.

“Cousin” Luke Horning finally had lady luck on his side in the “Featherfoot Warrior” Pro
Stock Series feature. Horning, who has been in the race lead in the closing laps many times this season, only to be denied the win, finally put it all together and held on for his first win of the season. Kim Duell tried to take the win away from Horning and had to settle for second. Jeff Washburn finished in third with Josh Coonradt in fourth and Nick Arnold rounding out the top five.

A ninth place finish for Kenny Martin allowed him to capture the track championship
over Kim Duell. It was Martin’s second Pro Stock championship at “The Great Race Place.” His first one came in 2015.

Paolo Pascarella picked up his second win of the season in the Limited Sportsman feature
holding off Justin Buff for the win. Lance Harting was third with John Stowell and Stephen Kneer rounding out the top five.

“The Wheelman” Randy Miller drove to his seventh win of the season in the 20-lap Street
Stock feature. Miller, who started 13th in the 16 car field stormed to the front and took the lead from Joey Wilson on lap eight. Although Wilson never really let Miller get too far away, Miller went the rest of the way virtually unchallenged. Wilson settled for second. Vermont campaigner Chris Murray, making a rare appearance at Albany-Saratoga, started dead last and charged to a third place finish. Jimmy Duncan finished in fourth with point leader Al Relyea rounding out the top five.

Jared Powell was the winner in the held over 4-Cylinder Dual Cam feature. Ben Grant
finished in second and unofficially took over the point lead going into the night cap. Jason Lang was third with Steve Ryan and P.J. Bleau rounding out the top five. Bleau and Ryan were tied for the point lead prior to the start of the event with Grant four points behind.

Malta Mudbits- Fireworks filled the sky over the race track in between the Limited
Sportsman and the Modified Feature. The display was originally intended to take place during the Independence Day weekend in July. However, it was rained out and rescheduled for Friday night.

It was “Military Night” at the speedway with any Military members being admitted free and honored in a pre race ceremony featuring the Patriot Guard of New York. The Patriot Guard is a group of volunteers who perform various ceremonies honoring veterans, military members, and their families as well as providing escort service for military funerals.

Coming up this Friday night September 8, the “King of the Dirt 358 Modified Series” will
be in action along with the “Northeast Crate Nationals” for the Sportsman division. “The Sowle Trailer Repair Pro Stock Showdown” will also be on the card. “The Showdown” will pay $2,500 to win. It will also be “Fire and Rescue night” at the Speedway.