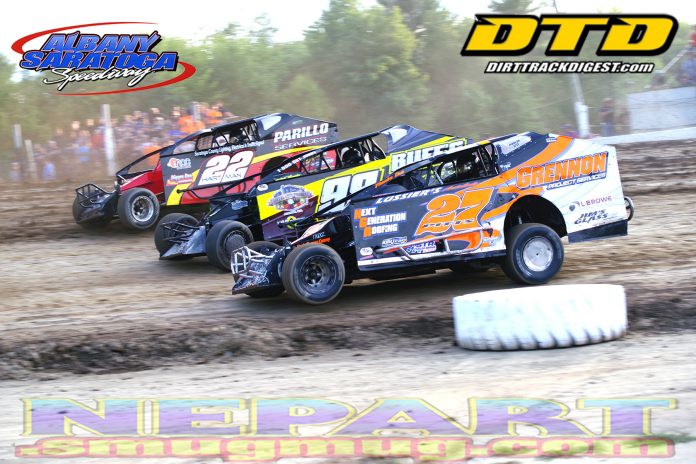 MALTA, NY – “The World of Outlaw Sprint Car Series” holds a “Month of Money” during the mid-summer. On Friday night, September 8, 2017, Albany-Saratoga Speedway will be holding a huge night of money with large payouts for the Modified, Pro Stock and Sportsman divisions. The Payouts are sponsored by Mike Sowle and Sowle Trailer Repair, who has been a long time supporter of the speedway as well as Tom Clothier Trucking

“The King of the Dirt Series”, the annual “Northeast Crate Nationals” will take place. Each year at Albany-Saratoga this is one of the season’s biggest events for Sportsman-Modifieds and usually one of the higher paying events of the season.

This year’s event will pay $2,225 to the winner. The race will be 100 laps with cautions count-ing through the first 75 laps. With a time-trial format used to set the field, the top six in time trials will be locked into the main event and will be included in the top 12 cars from the B, C, and D main quali-fiers, for the redraw for the main event.

Looking back on the history of the event which began in 2008, Jack Swinton picked up the in-augural victory. In 2010 Chad Edwards took home the checkers. In 2011 it was Ray Zemken and Tim Sears Jr. in 2013. The past three years have seen Tim Hartman Jr. take home the victory in 2014 and last year in 2016. Rocky Warner was the winner in 2015.


Also on the card for the night the 358 Modifieds will be in action. The race will be sponsored by Tom Clothier Trucking and will be a 40-lap affair that will pay $2,500 to win. The race is also raising awareness for Suicide Prevention.

“The Sowle Trailer Repair Pro Stock Showdown” will also be on the card paying $2,500 to win. This is the biggest paying event of the season for the Pro Stock division. The race will offer $200 to take the green and will be paying almost $13,000 throughout the field. Season long sponsor Mike Sowle who has sponsored “The Sowle Trailer Repair Series” for the Sportsman division has stepped in to put up the big money for the Pro Stocks.

It will also be “Fire and Rescue Night” at the Speedway. All fire and rescue personnel will be welcomed and admitted free with proper identification.