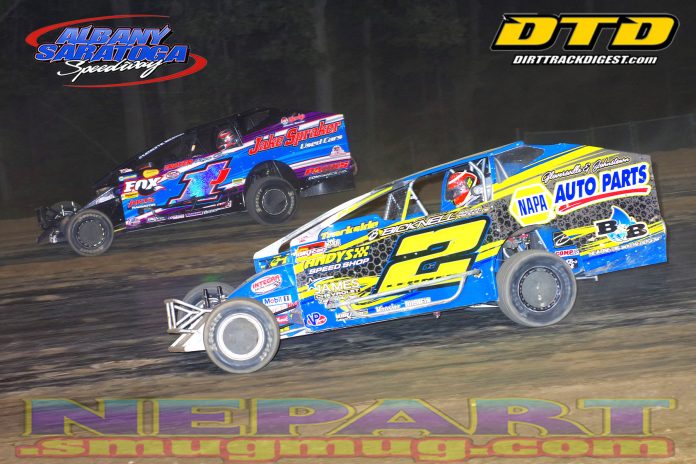 MALTA, NY – Rocky Warner and hurricanes have a lot in common. They storm in, shake things up, and leave with the green. That’s exactly what happened Friday night September 8th when the ‘Flying Squirrel’ breezed through time trails to the A-Main, diced it up with some heavy hitters, and left with the $2,225 winners share.

The seventh edition of the Northeast Crate Nationals began with time trials to lock in the Burt’s Tree Service Super Six. Connor Cleveland, Rocky Warner, Brian Pessolano, Jeremy Pitts, Andrew Buff, & James Meehan locked themselves into the A-Main and would await the redraw.

Next up were the Next Generation Roofing qualifying mains presented by Adirondac Leather. Tim Hartman Jr. (B-Main), Adam Pierson (C-Main), and Chad Edwards (D-Main) were victorious locking themselves into the A-Main and redraw.

Jeremy Pitts and David Schilling would lead the 30-car field to the green flag at the Nationals, with Schilling taking the early lead. Pitts would tuck in second with Cleveland trailing. Andrew Buff, Brian Pessolano, and Rocky Warner were engaged in battle as well with Tim Hartman Jr. and Adam Pierson just behind them.

Chad Edwards who started 11th on the grid was working his way forward and by lap 12 had moved into 6th. The man he’s chasing in KOD/DIRTcar East Region Sportsman Series points Rocky Warner used a three wide move around Hartman Jr. and Pessolano to move into the top five before going past Pitts for second and closing in on Schilling.


On lap 19 Warner made his move in turn two taking the lead from Schilling and began to run away in traffic. While that was happening Tim Hartman Jr. had found something on the high side to his liking. He took the long way around Cleveland and Pitts to find himself third.
Yellow flew for the first time on lap 32 when Michael Sabia had an engine expire in turn four. The top five at the point was Warner, Schilling, Hartman, Pitts, and Cleveland.

On the restart Warner would reassume control of the top spot, while some new players were flexing their muscle. Dave Constantino riding the high side moved into the top five and David Marcuccilli began challenging Chad Edwards for the sixth position.

At the halfway point it was all Warner who was in traffic again, but behind him Hartman Jr. and Schilling were battling for the runner up spot. The top 10 was full of who’s who in Sportsman Modified racing.

Yellow flew fore a second time on lap 60 when Dave Constantino slowed with a flat tire. Connor Cleveland also having troubles went pit side, but returned to the field ending his top 10 run. Utica Rome regular Will Shields also retired to the pits during the caution period.

On the restart once again new faces were joining the top 10 party, as JaMike Sowle found himself moving up to the number 8 position and KillerCrate Newcomer Of The Year Jeff Watson danced his way into the 9th position. Just behind him Josh Sunn and Scott Duell were starting to get things going.

Warner still strong on the front, Schilling still solid in second, and the battle for 3rd still raging between Jeremy Pitts and Tim Hartman Jr. Just behind them Chad Edwards and Brian Pessolano battled for the 5th position.

Yellow flew for the third time on lap 80 for Scott Duell who had his productive day come to an end after clipping an implement tire in turn four. The field would restack for what would be a nail biting finish to the Northeast Crate Nationals.

On the restart Warner would find himself under fire, as in turn one Chad Edwards went from 4th to 1st taking the lead off turn two. At the same time Schilling pressured low and they were three wide off turn four. Just behind them Dave Marcuccilli was watching it all unfold in 5th.

Warner took a few laps to regain his early race momentum and took the lead back from Edwards. Marcuccilli from 4th to 2nd, as Warner battled to hold of Edwards he snuck into the runner up spot.

NOTEABLE RUNS: Dave Marcuccilli had never seen the great race place as a driver until Friday. He found his stride and proved he’s one of the best in the Sportsman Modified ranks by earning a strong 2nd place run in the Nationals. Brain Pessolano had himself a solid run finishing 7th during the 2017 Nationals. A year ago Josh Sunn was injured in a serious car accident. This year he was a top 10 driver in the Nationals with a solid 8th place run. Jeff Watson is literally a rookie at Albany Saratoga. With maybe only 4 starts to his credit at the great race place he charged from 20th to 9th during the Nationals. Adam Leslie made the trip down from up North in Canada to race the Nationals and get his first glimpse of the great race place. He’d start deep in the field after qualifying through the consolation, but by races end he earned a respectable 11th place finish.