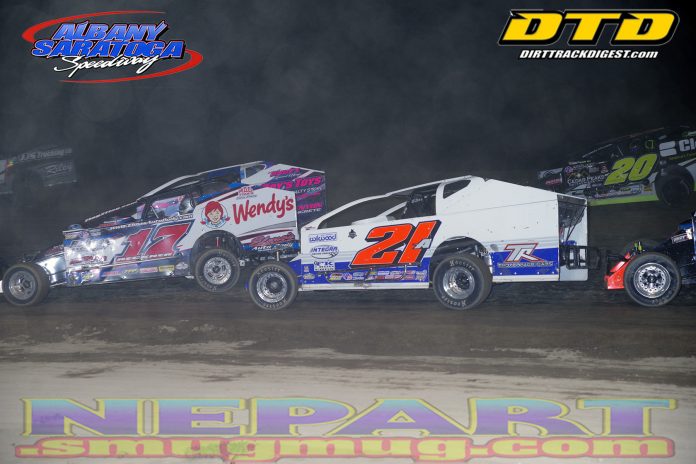 MALTA, NY – The 2017 season had not yet come to an official close when Promoter Lyle DeVore began to lay plans for the facility and program improvements at the popular dirt oval that runs weekly on Friday nights under the DIRTcar NE banner.

“The 2017 season was a great season for us despite five rainouts and threatening weather every week,” stated DeVore. “Our car counts were great and the crowds were good weekly. All in all we had a successful year.”

When fans and teams walk in the front gate on opening night in 2018 they will notice several improvements, all of which are designed to make their Friday night dirt racing experience a great one. The tentative “to do” list consists of many “big ticket” items including additional paving in the grandstand area, a new pit building for technical inspections that would accommodate two cars, increased signage, updated electrical infrastructure, a revamped victory lane area, and an expanded pit area. Long-term plans include expanding the suite areas to provide an enhanced experience for track sponsors.

“It’s a lengthy list,” said DeVore, “…and what we can accomplish will depend a lot on the weather conditions over the off season. Mother Nature will have a major say in dictating what everyone will see come Spring.”


Peter Britten, 2017 track champion, will be returning to defend his title in 2018 with car owner and former track champion Andy Romano of Andy’s Speed Shop (Amsterdam, NY). DeVore has been contacted by several drivers, across all divisions, who have indicated their interest in running weekly and an announcement will be made shortly regarding the season schedule, as well as returning and new competitors.

DeVore and his fiancé, Marcy Mangino, have several events planned that will make greater use of the speedway grounds such as car shows and craft/vendor fairs.

“Our fall craft / vendor fair held in early October was a success with limited exposure and we have been approached by several organizations that we are working with to accommodate their events,” said Mangino. “It’s exciting to envision the potential we have as a location.”

“The best thing about promoting Albany-Saratoga is that it’s where I got my start in racing as a young kid cleaning up the parking lot. Now, I’m the promoter and Marcy and I are working together to reach our goal of being one of the most successful dirt tracks in the Northeast,” commented DeVore.

The 2017 banquet will be held on Friday, January 26, 2018 at Holiday Inn Saratoga Springs (NY). For information on reservations and hotel accommodations check the track web site at www.albany-saratogaspeedway.com.