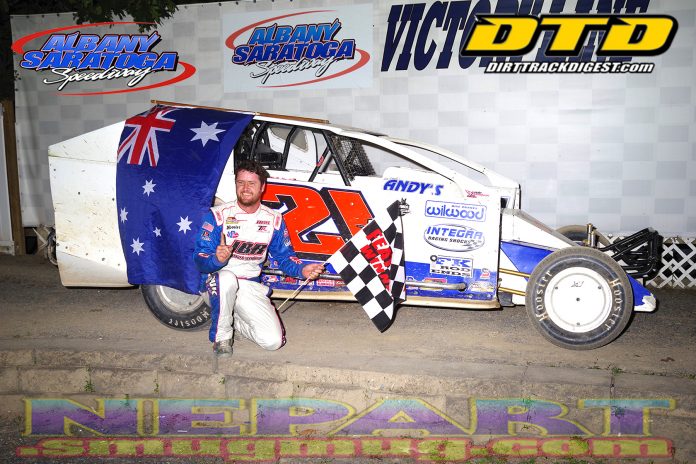 MALTA, NY – Peter Britten has experienced the highs and lows of wanting to make his living at dirt track racing. After all, he won the Australian V8 National Modified Championship several times before moving to New York in 2009 to hone his skills and make his mark as a top driver in the United States dirt Modified ranks.

When Britten was released by HBR Motorsports in December of 2016 he was left wondering how he would be able to put together a viable team that could run at a DIRTcar NE track weekly and run the DIRTcar NE Big Block Modified Series.

What happened in January of 2017 was a surprise call from Mike Romano of Andy’s Speed Shop (Johnstown, NY) asking if Britten might be willing to meet with Mike’s dad, Andy, to discuss a possible partnership that would run the Albany-Saratoga Speedway weekly.

Andy Romano has a long and storied history in dirt racing. His racing career began as a mechanic in 1957 on his father’s race cars at Fonda Speedway. Two years later he had his first start behind the wheel of a race car and he has driven or owned a winning team, including for his sons AJ & Mike, every decade since. Along the way Romano also won the track Sportsman title at Albany-Saratoga in 1984.

Romano was looking to get back into being a car owner at the weekly Friday night track and wanted to have fun supporting a driver who could be a contender given the right equipment. The two met and the chemistry between the young driver and his potential owner was immediate–both expressing their desire to not only run weekly at the Malta oval, but to be good enough the team might be a contender for the track championship.


“Right from the start we set out to win,” said Britten, “and not just win races but to win the championship. We achieved that but it wasn’t a walk in the park. I am very proud of everyone on the team and of the work we put into this championship.” Overall, the team’s performance was solid with two wins, 10 Top 5’s, 13 Top 10’s.

Britten’s approach to racing is like that of many others—you first need to win races and then the championship will take care of itself. At Albany-Saratoga this year wins were hard to come by with 12 different drivers taking home the wins for the 18 events run. Britten’s wins were the last two races of the year and his championship winning final event win came down to the last lap of the feature.

“We had an early season night with a 12th place finish and we committed to figuring out what we needed to do. By the end of the year we were firing on all cylinders,” commented Britten. When queried as to the team’s goals for 2018 Britten remarked, “Andy and the crew are excited to come back to do it again. We want to be back-to-back winners of the track championship, similar to what Brett (Hearn) has done in the past.”

Track promoter Lyle DeVore is appreciative of Britten’s commitment to the speedway stating, “…he drives three hours each way, passing another Friday night DIRTcar big block track, to be with us weekly. That team is like two different parts of the world that came together as one.”

Britten’s respect for the Romano family and the championship their support has brought him is evident when he speaks of his 2017 racing season, “…without them I wouldn’t have a ride. They (Andy and Mike) will never know how appreciative I am for the opportunities they have given me.”

Also high on his list of those who were responsible for Britten’s success this past year at Albany-Saratoga Speedway are Billy Colton of Troyer Race Cars and speedway promoter Lyle DeVore. “He (Colton) has been a tremendous help along the way providing a car that fits my driving style, and Lyle for creating all that he has done for Friday night racing. Being able to race there on a Friday night is a big deal. He’s one of the few tracks that is doing well.”

Romano, who recently celebrated his 80th birthday, thinks highly of his driver. “He’s one of the greatest drivers I have ever worked with. He is always good.” Thinking back over the past season Romano laughingly stated, “…he drove too clean for me some of the time. I told him to use the bumper but that isn’t his style.”

Preparations are under way at Romano’s garage in Johnstown with a new Troyer about 75 per cent completed and the potent Kevlar motor is being refreshed. Romano is also eager to get that back-to-back championship which Britten covets. “Our plan is to keep going and see what happens. We’ll be at Malta weekly and perhaps a few other select races.”

So the combining of the two different worlds of Peter Britten and Andy Romano has turned into a success story—one that definitely resulted in a fun season and a track championship at “The Great Race Place.”

What will 2018 bring for the team? They plan to do all they can so the results will be the same.

Information for the January 26th banquet can be found on the track web site at: albany-saratogaspeedway.com The banquet will once again be held at the Holiday Inn Saratoga Springs. Banquet ticket forms are available on the website. Tickets must be pre-ordered; they are not sold at the door. Orders must be postmarked by January 12, 2018. If you have any questions please call the speedway office at 518-587-0220 and leave a message.

There is a reserved block of rooms for January 26, 2018 at a special room rate of $109 each (before tax). When reserving a room, please mention the speedway banquet, and the group code SWY in order to receive the speedway rate.