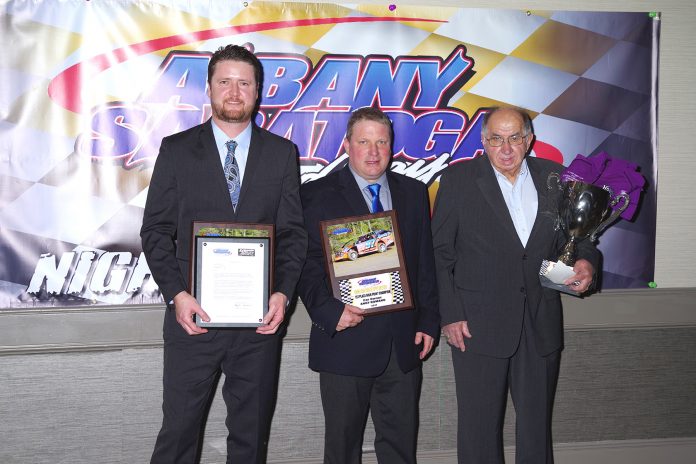 MALTA, NY – Albany-Saratoga Speedway closed the 2017 season with its annual banquet by honoring its division champions and several unique happenings at “The Great Race Place” on Friday, January 26.

The Holiday Inn Saratoga (Saratoga Springs, NY) hosted the event with approximately 300 guests in attendance with track announcer Dan Martin serving as emcee. Over 40 drivers were on hand to receive their point fund payment from the Modified, Sportsman, Pro Stock, Street Stock and 4-Cylinder classes, in addition to the many individuals who received special recognition for accomplishments during the 2017 season.

Track Promoter Lyle DeVore was one of those recipients as he was recently announced as the 2017 ARPY/RPM Northeast Promoter of the Year. The gathered group greeted the announcement with a round of applause and watched a video highlighting DeVore at work at the facility. The video, as well as a gift from fiancé Marcy Mangino, were a complete surprise to DeVore and he received many good wishes as he is now one of six regional finalists for RPM Promoter of the Year. That voting is currently taking place and the final announcement will be made during the RPM workshops held during Speed Weeks (Daytona Beach, FL).

As Martin explained during opening remarks, the 2017 season was a “different” season, one of many challenges but also one of many highlights that will not be duplicated at any other speedway. Martin explained how the track weathered five rainouts despite every attempt made to be able to open the gates. It also successfully weathered a challenge with the Town of Malta Town Board regarding alleged noise concerns.

That challenge from the Town was met with a standing room only crowd of supporters at a Town Board meeting at which the topic was to be discussed. The support group included racers, fans, officials and neighbors who spoke in favor of the speedway and its positive impact in the Town. The final result was conversations between DeVore and the officials of the Town that resulted in improved lines of communication regarding future activities at the Speedway.


A highlight of the night was the presentation of the 2017 Modified champion’s trophy to Australian driver Peter Britten of Weedsport, NY, and his car owner, Andy Romano, of Johnstown, NY. Britten had a fairly consistent season, holding the point lead during mid-season and reclaiming it with wins during the last two events of the year. Britten thanked Romano for “his faith in me to represent the Romano family,” and also thanked his team that worked tirelessly throughout the year.

Speedway owner Howard Commander, who was unable to be in attendance, sent a letter of congratulations that was read by Martin and said, in part, “…to win a points championship in one of the most competitive divisions in all of motorsports is very special. When I think of your journey and how far this sport has taken you, I am so grateful for drivers like you and their teams who travel such great distances to compete at our tracks.”

In the Sportsman ranks it was Rocky “The Flying Squirrel” Warner who was crowned the point champion. Driving his Jake Spraker owned no. 1J, Warner had another very successful season of four wins, eight Top 5’s and 16 Top 10’s. Warner commented “…at A-S it is a high level of competition and there is a prestige to racing there…it makes you a better driver.”

The stage for the full fender Pro Stock class was dominated by driver of the no. 93, Kenny Martin, who managed three wins, nine Top 5’s, and 15 Top 10’s in 2017. Martin now has a career total at A-S of 13 wins and two track titles (2015 & 2017). It was a season long battle with Kim Duell in the Curtis Lumber no. 14 and Chuck Dumblewski in the no. 7, who finished second and third respectively. Martin had three feature wins in 2017. Rounding out the top five were Dave DePaulo and Brandon Emigh.

Al Relyea captured the Street Stock championship title in his no. 14 that carried him to one win, 14 Top 5’s (six second place finishes} and 15 Top 10 finishes. His season record had only one finish outside the Top 5. Randy Miller finished second in the points with Jim Duncan, Damon Anderson and Joey Wilson finishing third through fifth.

In the two divisions of the 4-Cylinder class it was Will Ryan in the Single Cam division and Ben Grant in the Dual Cam division who were crowned the division champions.

Always a part of the Albany-Saratoga banquet are comments to the audience by track promoter Lyle DeVore whose remarks resonated with pride and a promise of building on the momentum that all have come to expect. DeVore remarked on a few “firsts” that occurred at the Malta facility including Britten’s first United States track championship and Brett Hearn’s 900th career win occurring at A-S, the track considered by Hearn to be his home track.

“Last season was some of the best racing I have seen at A-S,” stated DeVore and he continued with a commitment to more and different events to be held in 2018 including opening the track on April 8 for open inspection and swap meet, followed by April 13 for inspection and evening practice. The first official race of the season will take place on Friday, April 20, sponsored by Bart Contracting and paying $5,000 to win.

There were several unique events on the 2017 schedule and all are returning this season including a tribute night to Stan ‘Da’ Man DeVore, Nostalgia Night (Grady Photos), the Short Track Super Series race to be held August 14, the highly anticipated “Brett Hearn Big Show 10” to be run on Tuesday, June 26, the Classic Muscle Parts “Street Stock Nationals” paying $1,000 to win, the Tom Clothier Trucking “Suicide Prevention Awareness” event paying $2,500 for small blocks and the “Mark Hughes Memorial.”

Tuesday, June 12, will be dedicated as a special night honoring two of the most popular drivers to have ever run the dirt at the Malta oval—Jack Johnson and CD Coville. The racing will consist of 12 lap heats and a 61 lap feature event paying $6,112.

The Pro Stock class was the designated class to receive “Featherfoot Series” sponsorship by Ron Mensing for 2017. Receiving the award for the second time was popular Pro Stock driver Kenny Martin. It was announced that for 2018 the Series will focus on the Street Stock class.

Each year the track recognizes with a plaque those drivers from each class who are involved in a “Malta Memorable Moment.” This year’s honors went to Jim Duncan in the Street Stock class, Kim Duell in the Pro Stock class, and Don Ronca in the Modified class.
Brett Hearn’s 900th career win was celebrated as a “Malta Milestone Moment” with a video tribute of his career to date. Hearn noted he has called A-S “home since the early 90’s” as well as the “huge commitment and sacrifice” it has taken to reach that goal by all who are associated with his team.

The track “Spirit Award,” aka the “Dedication to Racing Award,” is given each year to an individual who uses their unique talents in the way that promotes the positive spirit the track. This year’s award was presented to “Princess” Mia Mangino. As a member of the DeVore extended family Mia has had many different roles at the speedway including selling concession items, selling 50-50 tickets and most recently taking the microphone to interview drivers track side giving the grandstand crowd a chance to get to know them better.

The banquet closed with a reminder to all the 2018 season is just weeks away and that the season schedule will be posted on the track web site (www.albany-saratogaspeedway.com) in the very near future.

Gary and Donna Palmer, owners of Accord Speedway, designed and built the many awards that were given out to race teams and individuals, including a trophy for DeVore that had a toy size grader on a base to recognize his “…dedication to a great racing surface.” Each trophy was uniquely designed to honor the individual recipient…

Gary Durocher of Electric City Taxi sponsored a point fund for the top five point finalists in the Limited Sportsman class, keeping track of the point standings throughout the season.
Damon Anderson donated $300 to the driver with the most heat wins in the Street Stock class and this year’s recipient was Mark “Rowdy” Burch. Two wild card winners of $100 each were Randy Miller and John Filarecki…