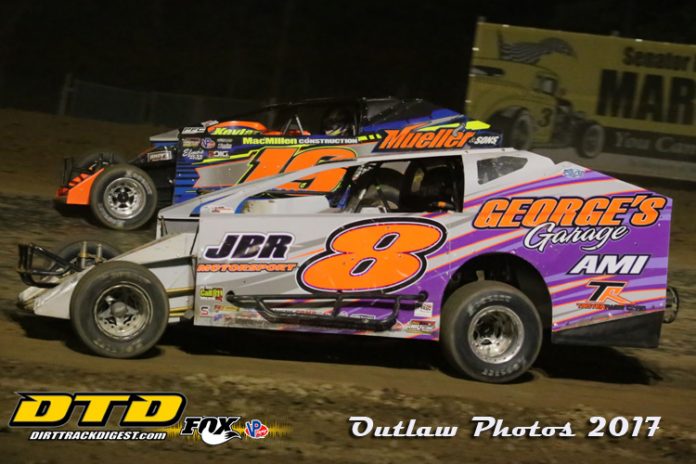 MALTA, NY – Although snow may still be seen in some areas of the Capital District, at the Albany-Saratoga Speedway promoter Lyle DeVore is anxious to swing open the gates on the 2018 season.

“We’ve cleared the snow from the track and have most of our ‘to do’ list done. We’re using the remaining couple of weeks to get everything in place for our April 8 open inspection and hoping our teams will take advantage of being able to have their cars looked at by John (Cummings) and his team.”

To that list one can add drivers Rich Scagliotta (Modified), Hector Stratton (Modified), and Jason Harrington (Modified) who raced full seasons previously and plan to return after brief absences from weekly competition.

“It’s looking like we are definitely going to have to consider expanding the pit area,” said DeVore, who then added “…all of these guys are great competitors and any one of them could win given the right circumstances. Competition will be really tough and the fans should enjoy watching them battle it out on the track.”

Also returning in 2018 are Marketing Partners such as Bart Contracting, BBL, Inc., Madsen Overhead Doors, Rifenburg Construction, Tremont Rentals, and It Works! to name a few.
Upstate GMC will once again be the title sponsor for the Modified class with Hahn Welding Supply sponsoring the Limited Sportsman class and Greg’s Towing back as title sponsor for the 4-Cylinder class.

“We have a lot of great companies who support us throughout the season and as race event sponsors and we appreciate their belief in the product we deliver each Friday night. Without them none of this would be possible,” stated DeVore.

Gates to the speedway will initially open on April 8 for an Open Inspection and a Spring Swap Meet. The Swap Meet is open to all to attend and provides a great opportunity for teams to sell and buy needed equipment and tools. There is a $25 vendor fee that is payable at the gate. The pit concession area will be open this day.

On Friday, April 13, an open practice day for all divisions will give teams an opportunity to test and tune to be ready for the April 20 opening race night. Pit gates will open at 3 p.m. for inspection with practice from 6 p.m. to 9 p.m. There is a $20 pit admission fee, grandstand spectating is free and a concession area will be open in both the grandstand and pit area.