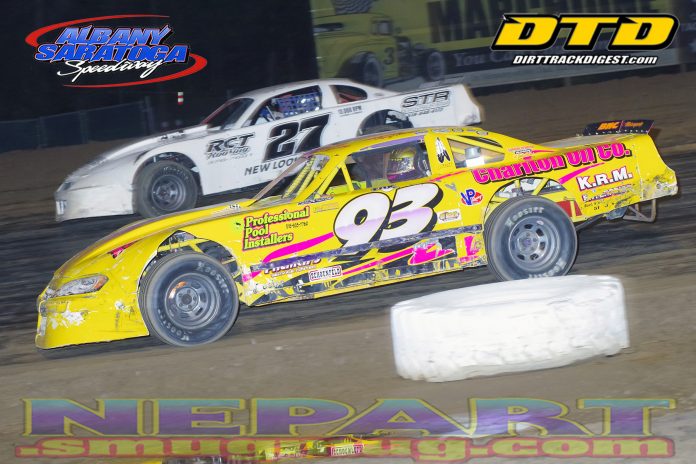 MALTA, NY  – Last year when promoter Lyle DeVore and his track management team at Albany-Saratoga Speedway began their planning for the 2018 season they discussed the possible need to expand the track pit area. Weekly car counts hovered around the 150 number and it was very tight quarters for the race teams—a problem very few tracks throughout the nation have today.

What wasn’t anticipated was that even an open inspection and practice day to start the 2018 season would have over 130 teams in attendance and would kick the pit expansion plans into high gear. “I’m surprised by the number of cars,” said a smiling DeVore. “I did not anticipate this many to turn out today. It looks like we’ll have to push the work on expanding the pits into high gear.”

The weather forecast was not the best and a very light shower in the early afternoon caused DeVore to think he would have to cancel the practice that was to begin at 6 p.m. Mother Nature decided to be benevolent, however, and the entire practice time was completed. Weekly competitor and young gun Jessey Mueller turned a very fast 14.969 second lap (96.2 mph) on the four-tenths oval in the first session for the Modified class.
Division car counts stood at 23 Modifieds, 62 Sportsman, 28 Pro Stocks, nine Street Stocks, seven 4-Cylinders, one Sprint and one USAC DMA Midget.

DeVore, who stood looking out at the pits from the tower vantage point near the end of the night enthusiastically stated, “This is fantastic! I’m happy with the track even though it’s heavy tonight. We’ve had a harsh winter and lots of rain lately, but the track held up very well throughout the practice time. I’m really happy with the support shown by our teams.”

When flagger Rich Peterson waved the green flag to officially begin the practice session it was 2017 Pro Stock champion Kenny Martin first to pace a lap in 2018. Fans who had turned out to witness the kick-off session were treated to over three hours of non-stop, on-track action. It was made even better with a new sound system that allowed announcers Dan Martin and Mike Warren to clearly reach all areas of the speedway grounds.


Opening night paying $7,500 to winner is this Friday night, April 20 and anticipation is high. Be sure to be there when the grandstand gates open at 5 p.m. Admission is $11 for adults, $2 for children 11 years old and under.