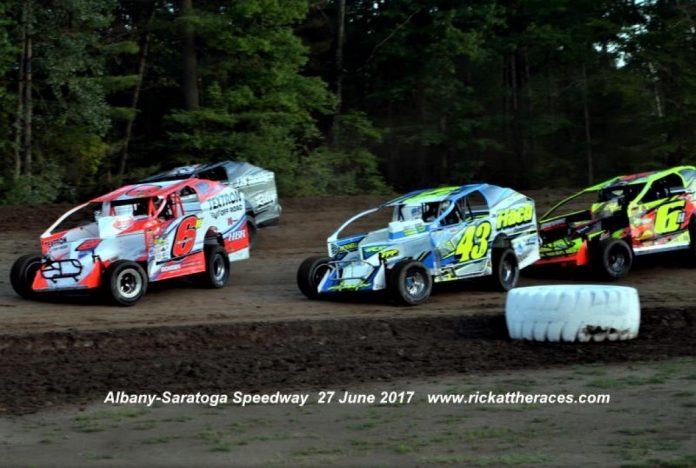 MALTA, NY – The 2018 season will begin on Friday, April 20, for “The Great Race Place” and while there are many who are anxious none are more so than promoter Lyle DeVore. It is also a highly anticipated day for Albany-Saratoga Speedway fans.

The opening night 44-lap main event, paying $7,500 to win, is being sponsored by long-time supporters Bart Contracting (Copake, NY) and Schaghticoke Wine & Spirits (Schaghticoke, NY) and has drawn great interest by fans and teams. Opening night heats for the Modified class only will be determined by a draw for position and feature race show up points will be awarded.

Track promoter Lyle DeVore stated “This is the largest payout on opening night that we
have ever had and I really appreciate our two race sponsors for making this happen. I’ve had alot of calls about the show and I’m telling everyone it’s a great opportunity to come and race with the best of the best.”

There are several teams who are expected to be in attendance who typically attempt to
win at the four-tenths mile oval only at special events. Among them are top DIRTcar runners Billy Decker, Stewart Friesen, Tim Fuller, Max McLaughlin and Jimmy Phelps.

No stranger to the track and what it takes to win at the Malta oval, Decker, Friesen and
Phelps have garnered wins in the past. Phelps was the winner of the 2015 Super DIRTcar
Series event and Decker has nine career track wins from when he competed weekly at the
speedway. Friesen now competes in the NASCAR Camping World Truck Series and can no
longer compete weekly at Albany-Saratoga. His appearance on the 13th is sure to up the ante  on the level on competition as he has earned 12 career speedway wins including the 2017 season opener.

DeVore continued, “There isn’t another Friday night track running in our area and this
would be a good chance to get some notes ready for the DIRTcar Series race “Big Show 10”
(June 26) and our “The Tribute” race (June 12) honoring CD Coville and Jack Johnson. Each
of these visiting drivers have great fan bases in the Capital District area and I’m sure their fans will be excited to see them compete in a regular weekly show. I know I am.”

Grandstand gates will open at 5 p.m. with the pit gate opening at 4 p.m. on Friday, April
20. Admission is $11 for adults, $2 for children 11 years old and under. Pit admission is $20
for DIRTcar NE or Albany-Saratoga Speedway or Lebanon Valley Speedway members and
$25 for non-members. You must be 13 years of age to enter the pit area; ages 13 through 17 require a minor’s release be completed for 2018 and on file with the speedway.

For the 2018 schedule and up-to-date Albany-Saratoga Speedway information be sure to
visit:
Online at www.albany-saratogaspeedway.com
Facebook at http://www.facebook.com/Albany-SaratogaSpeedway
Instagram at albany_saratoga