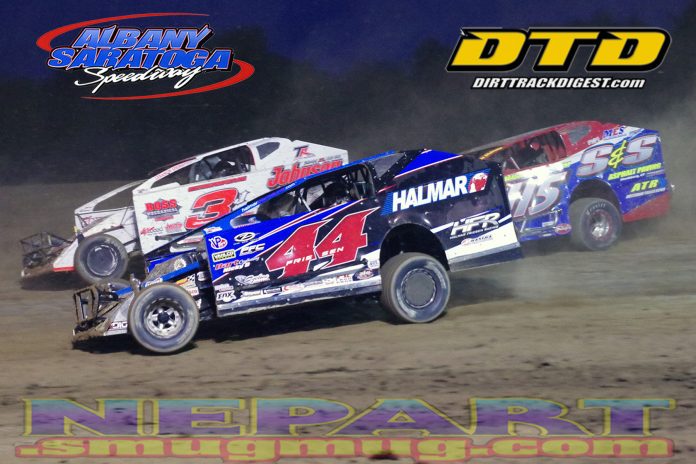 Malta, NY – Albany-Saratoga Speedway’s opening night has fallen victim to the cold, snow and rain that has plagued the area in recent days.  The opening night of racing will now be Tuesday, April 24 with grandstand gates opening at 5 p.m. and the pit area opening at 3 p.m.

“I hate having to make this call but with a forecast of daytime temperatures in the low 40’s and nighttime in the low 30’s it is the right thing to do for our fans and our teams,” stated promoter Lyle DeVore.  He continued, “…The Tuesday forecast is a vast improvement over Friday and I promise everyone we will be ready to go when the gates open and will move the program along quickly.”

The Modified feature for opening night, sponsored by Bart Contracting and Schaghticoke Wine & Spirts, will pay $7,500 for 44 laps and several of the top names in dirt racing had announced their plans to invade “The Great Race Place” including Billy Decker, Tim Fuller, Stewart Friesen, Max McLaughlin and Jimmy Phelps.

With the move to Tuesday it has been confirmed the invaders will be joined by Super DIRTcar Series champion Matt Sheppard.  Several other top names have been in contact with management indicating they also hope to attend because they no longer have a conflicting event.

Due to the change in date the speedway has made the decision to run a reduced program and it will consist of only the Modifieds, Sportsman, Limited Sportsman and Pro Stocks classes.  All other classes will return to the speedway on Friday, April 27.


The question remains—can they best regular weekly runners such as 2017 champion Peter Britten, six-time track champion Brett Hearn, Ronnie Johnson, Matt DeLorenzo, Marc Johnson, Keith Flach, Jeremy Wilder, Demetrious Drellos and Stewart?  All were feature winners in 2017 and are eager to be the first to win in 2018.

For the 2018 schedule and up-to-date Albany-Saratoga Speedway information be sure to visit: