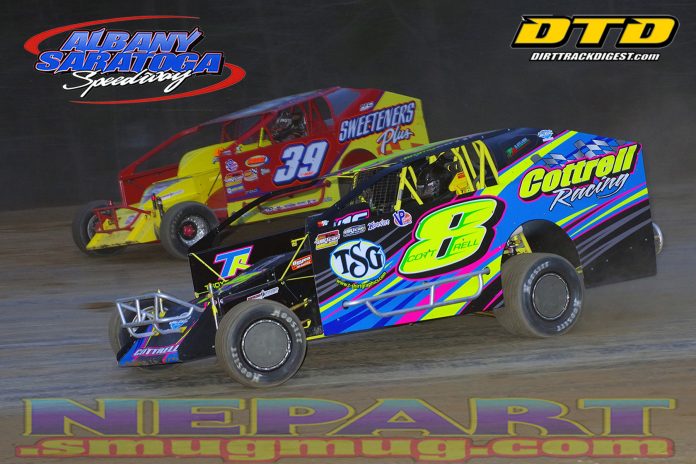 Malta, NY  – The season opener for the Albany-Saratoga Speedway kicked off Tuesday Night with a huge $7,500 to win “BRING IT!” modified feature. A stellar field of cars in all four divisions led to some fantastic racing at “The Great Race Place” in front of a standing room only crowd.

The Modified feature, undoubtedly one of the best feature finishes that will be seen all year, started off with Brian Gleason in his BBL 3g and Tim McCreadie in his Sweetners Plus 39 pacing the field. McCreadie’s hot rod, jumped out to the early lead with some heavy hitters starting to make their way through the field.

Matt Sheppard, in the Dendis Companies 9s, started 12th and was on a fiery pace as he was making his way through the pack. Former track champion, Kenny Tremont, in his S & S Paving / Rifenburg Construction sponsored car, started 17th and was also on the move.

The action was incredible as 2017 track champion Peter Britten, Matt Delorenzo and Max McLaughlin battled for position as the laps were clicking off. There were a few cautions to slow the pace, but the intensity was heating up between McCreadie and Sheppard, McCreadie was running the top of the track and Sheppard was on the bottom as they battled for several laps side-by-side. Sheppard would gain the top spot on lap 16 and start to separate himself from the rest of the field. After a few more restarts McCreadie started to regain his momentum as he hammered the top side of the track.


While most of the action was happening at the front of the field Kenny Tremont was quietly making his way forward to the front as the laps started to wind down. After a late race restart, McCreadie and Sheppard were swapping the lead back and forth with McCreadie rim riding the cushion and Sheppard hugging the bottom.

The action continued this way for the last five laps and as the white flag flew, the fans were on their feet as Tremont was reeling the leaders in but as they came off the fourth turn on the final lap, McCreadie edged Sheppard by .010 of a second at the finish. Following McCreadie and Sheppard across the line was Stewart Friesen third, Kenny Tremont fourth, and Ronnie Johnson rounded out the top five.

The Sportsman feature was another barn burner with Connor Cleveland and Chris Johnson setting the pace. Cleveland jumped out to the early lead and had Jeremy Pitts in tow. The battle got more intense as Cleveland and Pitts went door-to-door for several laps. The caution would fly for Joey Scarborough as he jumped the cushion in turn four. On the ensuing restart Cleveland would continue his lead and start to distance himself from the second place runner Pitts. Cleveland would take the checkered with Pitts in second, Chris Johnson third, the hard charging Adam McAuliffe fourth, and Josh Sunn rounding out the top five.

Newcomer Jay Corbin and pole sitter Brandon Emigh set the pace for the 27 car Pro Stock field to the green. Ballston Spa native Emigh would jump to the early lead and have a wicked battle going on for the top five spots. Corbin, Josh Coonradt, “Cousin” Luke Horning and Kenny Martin would play a game of swapping spots for numerous laps. Kim Duell was on the move in the Curtis Lumber Wagon as was the no. 5 of Norm Loubier who started 26th. As the laps were winding down Emigh held on to a commanding lead and would take the checkers. Corbin finished second, Duell would wind up third after starting tenth, Horning wound up fourth in his Classic Muscle Parts hot rod with Dan Older fifth.

The final feature of the night for the 53rd season opener was the Limited Sportsman main. Travis Billington and Gary DeRocher would lead the field to the green. There was a six car battle right off the start with Scott Bennett making a hard charge from his tenth place starting spot. After a couple of cautions, racing resumed with Michael Wagner Fitzgerald taking the lead. Wagner would hold off the field to the feature finish. Travis Billington would finish second, eighth place starter Paolo Pascarella would end up third, Gary DeRocher fourth, and John Stowell would round out the top five.

Racing action continues this Friday, April 27, with all divisions in action including the Greg’s Towing 4-C cylinder sponsored division. Pit gate opens at 4 p.m., grandstands at 5p.m. with racing starting at 7p.m.

Be sure to mark your calendars for our Tuesday, June 12, “The Tribute” race night honoring two track legends—CD Coville and Jack Johnson. The 61-lap Modified feature will pay $6,112 to win and is to be an evening of special tributes to two local racing heroes. 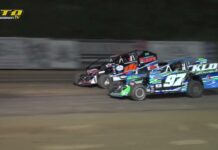