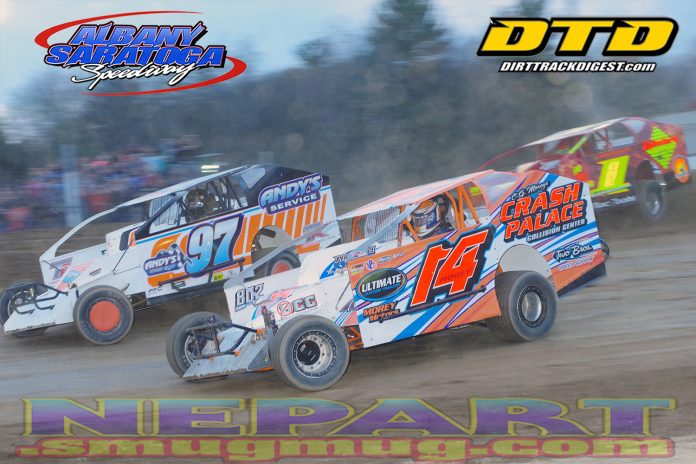 MALTA, NY – with double Modified features and a full program of all other weekly divisions on the card the fans in attendance at Albany-Saratoga Speedway got what they came for—great fast-paced racing with fan favorites Ronnie Johnson and Peter Britten winning the two Modified features.

Johnson, who started from the outside pole position of last week’s rained out event, took the lead from Jessey Mueller on a lap 23 restart to the delight of his fans.  Prior to that, the battle was intense between the no. 2RJ and the no. 19 of Mueller with the no. 3D of Matt DeLorenzo also in position several times to take the lead.  The action was slowed by a couple of cautions, including one on lap 23, that saw the engine of Keith Flach come apart going into turn three from a broken pulley.  When Flach slowed he was hit from behind by the no. 6h of Max McLaughlin who then did a slow roll over between turns three and four.

At the completion of the 35-lap feature it was Ronnie Johnson first to the finish line over a fast closing Matt DeLorenzo.  They were followed by Marc Johnson, Brett Hearn and 2017 track champion Peter Britten to round out the top five.  The crowd was on its feet cheering as Johnson pulled into victory lane to accept the checkered flag.

The racing became even more intense throughout the night in all divisions and when the regularly scheduled Modified feature rolled on to the track surface at mid-program it was Neil Stratton in his no. 87 who paced the field with New Jersey native Rich Scagliotta in his no. 8s on the outside pole.  Thirty-five cars were on hand for the first handicapped feature of the 2018 season.  A number of the top guns started back in the field including eventual winner Peter Britten who took the green in 14th position.

Britten’s no. 97b Andy’s Speed Shop sponsored Troyer car was good wherever Britten decided to run to get in front of those ahead of him and eventually, on lap 24 he not only got the lead but then pulled away from the field.  Prior to that Stratton held the point over a hard challenging Keith Flach in his no. 43 backup car, a big block normally run at Lebanon Valley.  Also in contention, running the high side, was the always popular no. 115 of Kenny Tremont Jr. along with Mueller, Britten and Matt Depew.


Making his way through the field, also running the high lane, was the no. 20 Madsen Motorsports car of multi-time track champion Brett Hearn.  Hearn’s run, while very strong, wasn’t enough to unnerve Britten and at the end of this 35-lap feature it was the Australian native who got his first win of the 2018 season.  Last year it wasn’t until the last point race of the season that the no. 97a found victory lane.  Britten has run a Troyer chassis his entire career and dedicated his win to former asphalt Modified runner, and well-known chassis builder. Maynard Troyer who had passed away earlier in the week.

In the Pro Stock division it was all about the exceptional run by Kenny Martin and his ability to keep his no. 93 out of trouble through the many cautions that plagued this 25-lap feature.  Josh Coonradt was the early leader, losing the lead to Martin on lap 23 and then managing a second place finish.  Martin, who split Coonradt and Kim Duell coming off turn four, took the lead and then kept everyone lined up behind his no. 93.

In victory lane, an emotional Martin dedicated the win to long-time friend and Albany-Saratoga official Bernie Heald who had lost his fight with cancer earlier in the week.  Duell finished in a challenging third position followed by Norm Loubier and Brandon Gray to complete the top five positions.

Randy Miller was the class of the field in the Street Stock division with an impressive side-by-side run with Al Relyea for many laps, providing for some exciting action for the fans, proving it isn’t always about speed that makes for a good race.  Mark Burch, Scott Lawrence and Damon Anderson completed the top five spots at the checkered for their 20-lap main.

With 35 cars on hand for the Sportsman division it was evident the competition would be fierce and it was Chris Johnson who earned the win after a 25-lap battle with eventual second place finisher Connor Cleveland, David Schilling, and David Constantino completing the top five.  While Johnson started on the pole he had to be alert as several caution flags kept the field bunched together and the competition on Johnson’s rear bumper.

Racing action will resume on Friday, May 18, and will include all weekly divisions plus the “Native Pride Street Stock Series” as the track celebrates its annual “Law Enforcement Night.”  Police, ambulance, and EMT personnel are free this night upon showing proper identification.

Double features from the May 4 rained out program will be run for the Pro Stock division on May 18, the Sportsman on June 1, the 4-Cylinders on June 8 and the Street Stocks on June 15.  General Admission for adults is $11 for regular weekly shows with grandstand gates opening at 5 p.m.

For the 2018 schedule and up-to-date Albany-Saratoga Speedway information be sure to visit: