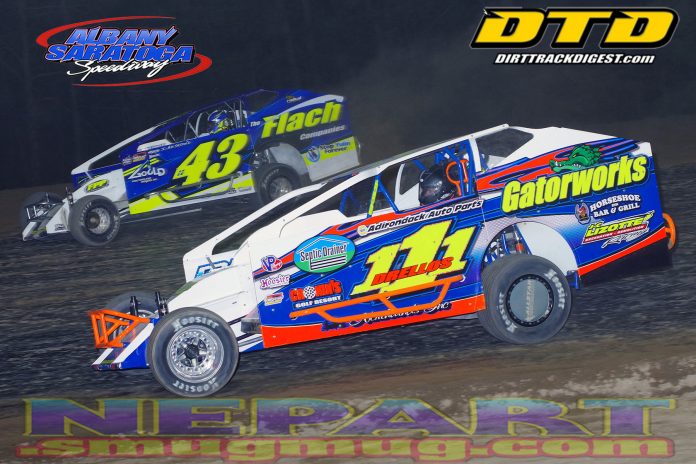 MALTA, NY – within the last two weeks Ravena, NY native Keith Flach has experienced the lows and the highs of Modified racing and it was obvious this night that the highs of the sport are much more enjoyable. Driving his familiar no. 43 Flach Crane and Gould Erectors car, Flach drove a mistake-free 35-lap feature to claim his fourth career win at “The Great Race Place.”

“We had good luck on our side and we were blessed tonight,” stated Flach in victory lane. “Last week was not how we wanted to start,” he continued referring to a broken pulley caused engine issues in his heat and a right rear flat in the feature that eliminated him from competition.

Thirty-three cars took the green with the 10n of Jim Nagle and the 37 of Justin Barber heading the group going into the first turn to start the feature. A lap one caution led to a restart in which Flach managed to get the lead from Nagle and then hold on to it until the checkered fell on lap 35. It was no easy task for Flach as he was challenged on several restarts and had to work his way through lapped traffic to claim the win.

By lap 20 Ken Tremont Jr from 12th position and Ronnie Johnson from 13th position had worked their way through the field to challenge from second and third positions. Also maneuvering their way to the front were Brett Hearn from 18th, Marc Johnson from 15th and Jeremy Wilder from 10th to eventually round out the top five finishing positions.
Utilizing every lane throughout the entire feature, the fans were up and cheering as the Modified field once again put on a great race with plenty of passing in the high and low lanes and lots of side-by-side competitive racing.

It is early in the track point battle but at the conclusion of this night it is multi-time champion Brett Hearn out to an early lead with 178 points over Ronnie Johnson and 2017 champion Peter Britten who each have 170 points. Marc Johnson trails at 168 points with Matt DeLorenzo weighing in at 162 points.


The Pro Stock division ran two feature events this night, the first being the rained out feature from May 4. Josh Coonradt, Luke Horning, Kim Duell, Kenny Martin and Nick Stone finished the 25-lap feature in that order with Coonradt scoring his first ever Albany-Saratoga career win. The results of this event are pending until decision regarding a protest filed with DIRTcar NE has been received from DIRTcar Technical Director Mark Hitchcock.

A red flag on lap 19 for a frontstretch rollover by both Brandon Emigh and Doug Sheely brought everyone to their feet as the no. 2 of Emigh landed on its side and the no. 28 of Sheely landed on its roof and then caught on fire. Both drivers were able to walk away from the crash but with both cars very heavily damaged.

The second Pro Stock feature had a 26 car field, again for 25 laps, and it was fan favorite Kenny Martin who captured the win for his second win of the 2018 season and his 15th career win at Albany-Saratoga. At various times the race was a battle among early race leader Scott Towslee, Nick Stone, Jay Corbin, Luke Horning and Kenny Martin. With two to go it looked as though Stone would win the event but a low side move going into turn four, followed by him splitting the Stone and Corbin cars coming off the turn, put Martin in the lead. He was followed across the finish line by a still hard charging Stone, Corbin, Walt Brownell and Kim Duell.

For the 2018 season, track sponsor Ron Mensing’s “Native Pride Series” will focus on the Street Stock class. The annual series rotates among the classes annually at the track with the series winner receiving special recognition at the annual banquet. Dave Cook jumped out to an early lead in the 20-lap feature that was lost when a caution came out on lap five. From that point on it was Randy Miller and Al Relyea who ran side-by-side by several laps before Miller took the lead for the final time on lap 19 and earned his third win of the season. Finishing behind Miller were Relyea, Cook, Mark Burch and John Filarecki to complete the top five.

In similar style to all other classes, the Sportsman feature was very competitive with the no. 27 of Jeremy Pitts winning his first feature of the season. The first five laps of the feature event were under the control of Dave Baranowski in his no. 112 but he lost that lead with an inside pass by David Schilling going into turn three. Schilling then dominated until he was put to the rear by the race director for his contact with two lapped cars that resulted in a turn four caution. After an on-track disagreement with the flagger, Schilling’s car was towed to the pits as Schilling angrily walked to the pit area.

That gave the lead to a jubilant Jeremy Pitts who also scored his first win of the 2018 season. He was followed across the finish line by a hard charging Andrew Buff, Chad Edwards, Tim Hartman Jr and Connor Cleveland.

The Limited Sportsman feature with 27 cars taking the green was won by John Stowell over Justin Buff, Michael Wagner Fitzgerald, Josh Rozelle and EJ McAuliffe. Buff had held the early lead but lost it on lap eight to Stowell when he went high in turn three on lap 12. From that point on it was Stowell’s race and he weaved his way through lapped traffic to take the win.

This Friday, May 25, the Patriot Sprint Tour will take center stage for a special Memorial Day Weekend show. The Modifieds and Sprints will run heats with features only for all other divisions. Admission will be $16 for adults and $2 for kids 11 and under.

Don’t forget to mark your calendars for a very special night of racing on Friday, June 12, as the speedway will honor two of its greatest drivers ever—Jack Johnson and CD Coville. The feature event will be 61 laps and pay $6,112 to win. Check the track website for details.