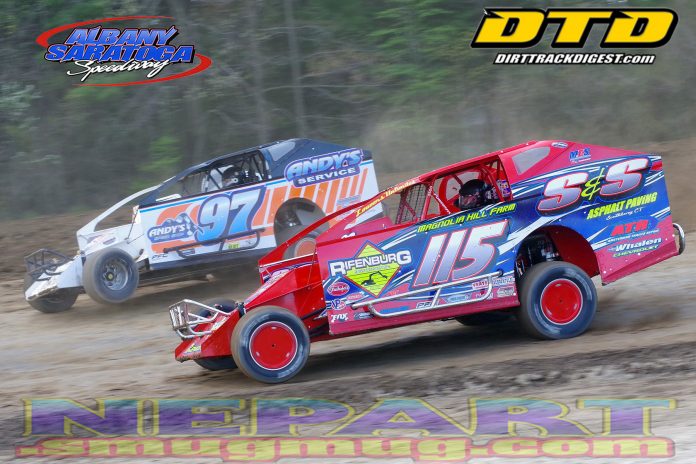 MALTA, NY – Kenny Tremont Jr., who won his first Albany-Saratoga feature on July 2, 1982, managed once again to finish ahead of the 32-car field when it mattered the most—that being the conclusion of 35 laps of intense Modified competition. What had the crowd on their feet, besides fan favorite Tremont earning his first win of the 2018 season, was the intense battle that took place between his #115 S & S Asphalt Paving sponsored car and the #20 Madsen Motorsports sponsored car driven by Brett Hearn.

Beginning on lap 21 the battle between the two track titans was fierce when Hearn, coming from his 15th starting position, and running the high line the entire race, managed to earn the second spot. It was game on from that point with the two doing battle for the remainder of the show. Hearn held the lead briefly on laps 27 and 29 but Tremont had no intention of being denied his 74th career win at “The Great Race Place.”

Before this epic battle took place it was Kris Vernold in the #97k who had led for the first 17 laps and he was working hard to keep drivers like Matt Pupello and Demetrios Drellos behind him. After having run perhaps his best race of the year to date, Vernold finished third losing the lead to Tremont on lap 18. Also having his best run of the year was Jack Lehner in his #2L who managed a fourth place finish, followed by last week’s winner Keith Flach.

For Tremont the win held extra special meaning as it gave his father, Ken “Abe” Tremont, his 47th consecutive year (of 50 years total) of having a car in victory lane. “I knew I had to hit my marks. This is a special night for us all,” said Tremont in victory lane. The victory was made even sweeter with an unexpected $1,000 bonus for the night provided by Amsterdam Trailer Repair of Amsterdam, NY.

The A-Verdi Storage Containers Patriot Sprint Tour made its only stop of the season at the Malta oval and when all was said and done it was “The Cobra” Chuck Hebing who was declared the winner. Thirty-five Patriot Sprints were on hand and provided some unusual excitement for the crowd as veteran driver Steve Poirier in his #28 led the first 13 laps over local runner Danny Varin in his #00. Varin then took the point and looked to be the eventual winner, but a brush against the frontstretch wall coming off turn 4 on lap 20 and then again on lap 22 after jumping the berm, also in turn 4, caused him to drop out of the feature.


The fight for the lead then was taken up by Poirier and the #87 of Jason Barney who had been working his way through the field very adeptly. Both were to be denied when on lap 24 Poirier came down into Barney costing himself the lead. On the ensuing restart, Barney made contact with Davie Franek in the #28f resulting in a 16th finishing spot for Franek.
At the finish line it was Hebing and Barney, however, Barney was penalized two positions by PST officials for running into Franek. The resultant top five spots went to Hebing, Jeff Cook in the #10c, Cory Sparks in the #1hd, Barney and the #90 of Matt Tanner. This feature was also sponsored by Amsterdam Trailer Repair with an additional $1,000 being earned by Hebing.

The remaining divisions ran features only this night. In the Street Stock class it was Randy Miller who graced victory lane once again, his third win of the season. He was followed by Al Relyea, Mark Burch, John Filarecki and Damon Anderson to complete the top five.
The 25-lap Pro Stock feature was slowed by nine cautions with the eventual winner being #93 driver Kenny Martin for the second consecutive week. Josh Coonradt in his #00X was the initial leader, followed by Luke Horning and Kim Duell. Duell had taken over the top spot on a lap 14 restart and held on despite a lot of pressure from Martin that began on lap 18. Martin had worked his way to the front using the low lane and managed to wrestle the lead from Duell on lap 21.

From that point on, for the next four laps, it was Martin’s race to lose as he pulled away to the win. He was followed by Duell, Jason Corbin, Luke Horning and Nick Arnold to complete the top five positions.

The Sportsman feature race of 25 laps was a popular win for Tim Hartman, Jr., his 15th career win at Albany-Saratoga. Rounding out the top five were Adam McAuliffe, Chad Edwards, Chris Johnson and Connor Cleveland.

In the Limited Sportsman feature it was a reversal of last week’s finish with Justin Buff taking the win over John Stowell, Travis Billington, Bryan Jones, Jr. and Stephen Kneer.
This Friday, June 1, is “NYSSCA Night” and “Kids Bike Giveaway.” The program will be for all weekly divisions plus 4-Cylinders. Admission will be $11 for adults and $2 for kids 11 and under. On Sunday, June 3rd, the Electric City Riders, AMA Motorcycle & 4 Wheeler Races and Swap Meet as well as the NYS 4/10ths Championship Event will be the program. Gates will open at 11 a.m. and racing will begin at 12 noon. Front gate for this day will be $10 for adults and $2 for kids 11 and under.

Don’t forget to mark your calendars for a very special night of racing on Friday, June 12, as the speedway will honor two of its greatest drivers ever—Jack Johnson and CD Coville. “The Tribute” feature event will be 61 laps and pay $6,112 to win. Check the track website for details.