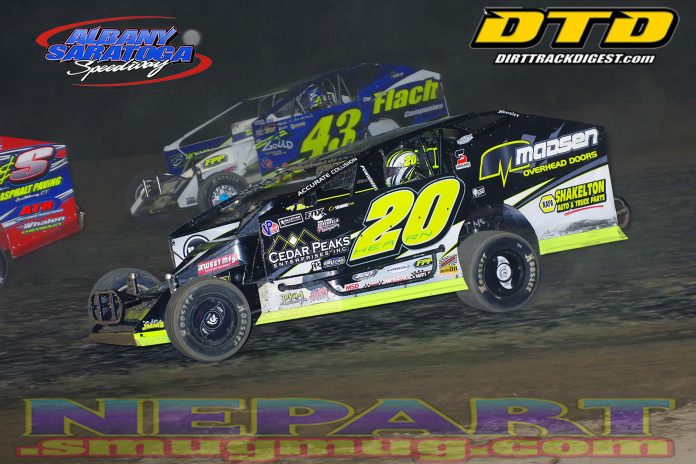 SUSSEX, NJ – The countdown has begun. It’ll be here before you know it. This coming Tuesday, June 26, champion race car driver Brett Hearn presents ”The Big Show 10,” a 100-lap Super DIRTcar Modified Series race at Albany-Saratoga Speedway in Malta, New York. Paying $10,000 to win, The Big Show 10 is one of the premier dirt track Modified race meets of the summer season.

Fans can expect to see an outstanding field of cars and their star drivers, as this event brings together all the top teams that follow the Super DIRTcar Modified Series, the Modified drivers that race weekly at Albany-Saratoga Speedway, as well as independent Modified drivers from across the Northeast. From the world of NASCAR and Fox Sports TV, Kenny Wallace will also be behind the wheel of an 800-horsepower Big-Block Modified, ready to take on the competition and the 0.4-mile semi-banked clay Albany-Saratoga Speedway.

The starting field for The Big Show 10 will be determined through group time trials, heat races and last chance consolation dashes, and a starting position draw among the top qualifiers.

Spectator gates for The Big Show 10 Super DIRTcar Modified Series race meet on Tuesday, June 26, will open at 4:00 pm. Fans are encouraged to come out early and enjoy the attractions. Besides sampling all the refreshments available, several souvenir trailers offering a wide variety of racing-oriented items will be on site. Retired driver Gary Balough is bringing his restored 1980 Super DIRT Week winning “Batmobile” Modified and will be autographing copies of his newly-published biography. Fans will also have the opportunity to get autographs from current top Super DIRTcar Modified Series and Albany-Saratoga Speedway drivers and special guests. The autograph session is scheduled for 5:00-6:00 pm. Warmups and pre-race activities will follow. Racing begins at 7:00 pm.

Fans can also take part in the “Pick-the-Quick” contest by selecting the five fastest drivers from the group time trials. The choices do not have to be in order. There’s a $1,000 jackpot to be divided among any fans who name all five fastest drivers on their contest entry. Scoring four out of five fast timers earns a pit pass upgrade. Deadline for entries will be 6:00 pm.

The companion support division will be The Big Sportsman Show presented by Fox Racing Shocks for Sportsman cars. The field for the Sportsman portion of The Big Show 10 will be divided in half for a pair of 20-lap feature races, each with its own payout including $1,000 to each winner. There’s a $250 bonus for winning cars equipped with Fox Shocks. All the competitors will register qualifying times during timed hot laps. Then the field will be evenly divided, and the top-12 from each group will redraw for starting positions for their feature races.

Presented by Recovery Sports Grills, Halmar International, VP Racing Fuels, and Fox Racing Shocks, The Big Show 10 is bound to be an exciting evening of dirt track racing at its very best.

General admission for The Big Show 10 is $25. Top row reserved seating in the stands is $35 and VIP seating at $75 and $90. Reserved seats may be purchased by going to www.thebigshow10.com. Pit admission with DIRTcar or Albany-Saratoga membership is $30; non-members $35. Pits open at 3:00 pm.

Brett Hearn is a champion professional race car driver with 905 race wins (900 feature races and 5 All-Star events) to his credit. He has captured 91 track and series championships. Driven Marketing is Hearn’s team that promotes special motorsports events. Go to www.bretthearn.com, www.thebigshow10.com, or www.albany-saratogaspeedway.com for additional information.