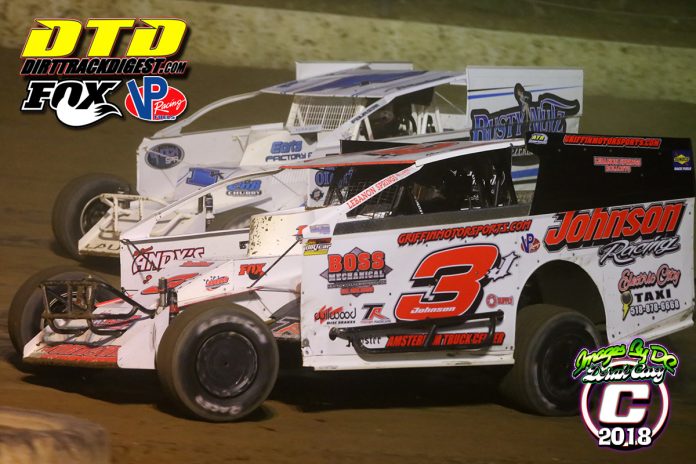 The 50-lap STSS Modified event – postponed by 24 hours due to rain on the original Tuesday date – was an instant classic on the ‘Great Race Place’ four-tenths-mile track.

Guilderland, N.Y.’s Johnson emerged from an intense three-car battle in the final 10 circuits of the event to take home a $6,000 top prize: $5,000 from the posted purse plus an additional $1,000 courtesy of last-minute sponsor Amsterdam Trailer Repair.

“What a race!” Johnson said after receiving an ovation from the crowd at his home track. “I could see the top was going away and the bottom was getting better. I committed to the inside and knew I had to hit my marks.”

Veteran Frank Cozze made the long haul from Wind Gap, Pa., to compete in the ‘Stampede’ event and started from the pole via a redraw of top heat-race qualifiers.

A past ‘CVRA vs. the World’ winner at Albany-Saratoga, Cozze took the David Renaldo-owned No. 401 small-block to the lead at the outset and thwarted a slew of challenges. As the race progressed, track regular Ronnie Johnson fought his way to second after rolling off the grid eighth.

It was Cozze, however, who remained in front to collect the Superior Remodeling $200 Halfway Leader bonus.

Marc Johnson, after rolling off the grid in ninth, was quietly working forward utilizing the inside lane as the track continued to slick off. He was fifth at lap 26 and moved to third on the 30th circuit.

With 10 laps to go, Cozze, the Johnsons, 27th-starter Matt Sheppard and Anthony Perrego formed up a five-car tussle for the top spot.

An epic side-by-side battle raged as Sheppard – like Johnson, running the bottom – broke into third. At lap 48, Sheppard attempted to split the middle of inside-running Marc Johnson and rim-riding Ronnie Johnson.

The move didn’t stick and Marc Johnson surged off the bottom to take the lead and the victory.

Duanesburg, N.Y.’s Ronnie Johnson narrowly edged Sheppard at the line for a runner-up finish worth $3,000.

Sheppard, aboard the Sweeteners Plus No. 92s, ended his stirring drive from 27th to complete the podium and receiving the Hard Charger Award worth $200 cash from Land Hoe Maintenance and product certificates from Beyea Custom Headers and QA1. Sheppard had won the evening’s first heat race but was light on the scales and disqualified. He earned his feature starting position through the B-Main.

Finishing sixth through 10th, respectively, were Mat Williamson of St. Catharine’s, Ont., after running as high as third in the Behrent’s Performance Warehouse No. 3; Mike Mahaney of King Ferry, N.Y., aboard the Olum’s No. 33 after battling inside the top-10 for the entire distance; series point leader Billy Decker of Sidney, N.Y., aboard the Jeremy Smith Racing No. 91 from 19th; Kenny Tremont Jr. of West Sand Lake, N.Y.; and Mike Gular of Boyertown, Pa., who started 25th in his Albany-Saratoga debut.

Despite the postponement, a robust field of 47 STSS Modifieds signed into the pit area.

MALTA MEMORIES: What appeared to be a beautiful evening turned when rain began tracking toward the speedway at the scheduled starting time. Albany-Saratoga and STSS officials pressed through the program rapidly, with the Modified checkered flag falling at 8:50 p.m. Only the Sportsman main was to follow….

A very strong southeastern PA-NJ contingent was in attendance including Ryan Godown, Jimmy Horton, Matt Stangle, Brandon Grosso, Mike Gular, Duane Howard, Frank Cozze and Rick Laubach. Particularly impressive was Gular after breaking in the heat race and driving from the 13th row in the feature to finish 10th….

Tough night for series regular J.R. Hurlburt. His Jamie and Denise Page team broke down en route to the track, lost a driveshaft in qualifying and broke down with their back-up tow vehicle while driving home….

Next up for the Short Track Super Series is the ‘Blast at the Beach’ presented by VAHLCO Wheels on Tuesday, Aug. 28 (rain date: Aug. 29) at Del.’s Georgetown Speedway. This event will be recorded for broadcast on MAV-TV. STSS Velocita-USA South Region Modifieds race 35 laps for $5,000 to win, $1,000 for 10th and $400 to take the green flag. Also on the card: STSS Crate 602 Sportsman ($1,000 to win), Delaware Super Trucks and Delmarva Chargers.