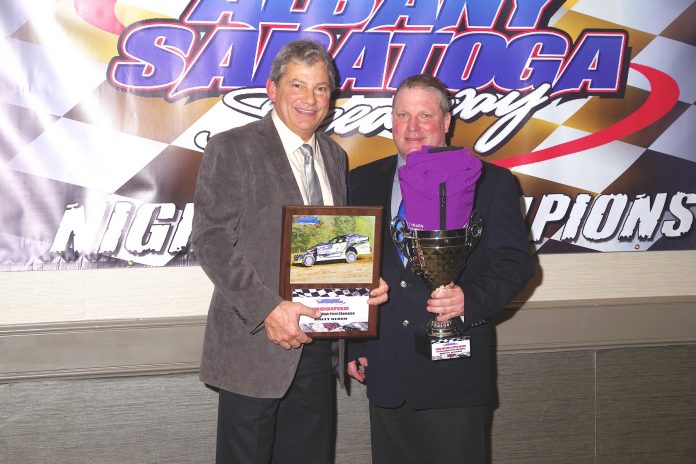 SARATOGA SPRINGS, NY – Albany-Saratoga Speedway officials closed the books on the 2018 season, and began generating interest for 2019 at the track’s annual awards dinner on Friday, Jan. 25 at the Holiday Inn of Saratoga Springs.

Over 330 drivers, owners, fans, officials and special guests packed the banquet room as Albany-Saratoga honored its track champions and handed out a number of special awards.
Promoter Lyle DeVore, who was recognized for his nomination as the RPM National Promoter of the Year, which will be announced on Feb. 11, got the crowd pumped up early in announcing that the season-opening modified feature will pay $5,400 to win, as a tribute to the track’s 54th season of racing, and that Albany-Saratoga Speedway will host the Fall Pro Stock Classic, which will pay $5,000 to win, on Sept. 5.

In addition, there will more high-paying small block modified races on the 2019 schedule, which will be finalized soon, the sportsman division will have eight or 10 races that will pay $1,000 to win and plans are still being made for a spectacular two-day show, which will include all of the track’s regular divisions, in mid-September.

“We’re going to give you a killer race track, big purses and have a hell of a year,” DeVore said.


Despite winning just two races and finishing 24th in the final points race of the season, Hearn was able to walk off with his eighth track championship at Albany-Saratoga Speedway.

“I’ve had years where I’ve won 10 races and not won a championship because we didn’t have consistency,” said Hearn, who had 10 top-five finishes in 2018. “This year, we had that consistency.”

Hearn also had the magic touch when his Super DIRT Series “Big Show 10” drew one of the biggest crowds in the history of the speedway.

“My goal was always to have cars parked on Route 9,” said Hearn. “That night was a big win for me.”

Hartman Jr. won his first sportsman title and he and his father, Tim Sr., were the recipients of the “Historic Malta Moment” award for becoming the first father-son team to win sportsman championships. Tim Hartman Sr. is a three-time champion at Albany-Saratoga.

“This is pretty special,” said Hartman Sr. “I didn’t realize until late in the feature on the final points night that we would be the first father-son sportsman champions in history, I almost lost it. I used to be known as Tim Hartman, but now, I’m Tim Hartman Jr.’s father. But that’s not so bad.”

“To go into the record book with my father is really special,” said Hartman Jr., who finished in the top 10 in all 17 of his starts in 2018. “I’d like to thank (car owner) Mike Parillo for the opportunity he gave me three years ago. That’s the best thing that ever happened to me. I can’t thank him enough.”

Martin chalked up his third track championship in four years (and sixth overall) in 2018, but announced at the banquet he won’t be defending his title in 2019.

“This is a bittersweet year for me,” he said. “I’ve sold my house and if everything goes right, I’m moving south and will be out of here in March.” Martin will be helping his son, Sheldon, as he pursues a racing career of his own.

Ron Mensing was the recipient of the Spirit Award for “his total dedication to the Great Race Place.”

“I didn’t know anything about this,” said Mensing from the awards podium. “It’s an honor for me to work with Lyle and help him put on a show,”

Pro stock driver Kim Duell was honored for recording the 50th victory of his career (taking into account all divisions he’s raced in) and Jessey Mueller got the “Malta Memorable Milestone” for winning his first modified feature at Albany-Saratoga Speedway during 2018.

“That was one of the best moments of my life,” said Mueller, a multi-time winner on the asphalt at Devil’s Bowl Speedway before making the switch to dirt. “I’ve watched guys like Kenny (Tremont Jr.) and Brett for my whole life and I wanted to be there (in victory lane) someday. I thought it was going to be easy, but it took me a couple of years to get the hang of it.”

Also honored was Jack Lehner, who was named the Modified Rookie of the Year after finishing ninth in the season-long points race. Following the regular season, Lehner made his first appearance at Super DIRT Week in Oswego, won one of the last-chance qualifiers races and finished 21st in the 200.

“I got off to a rocky start, but overall, I think I had a pretty good season,” said Lehner. “The one race that stuck out in my mind was when Brett and I were going at it for second one night. That was pretty cool.”

Former modified track champion Ken Tremont Jr. also made a trip to the podium. Although he only won two features in 2018, those wins gave him 25 seasons with at least one win at the “Great Race Place.”

Miller dominated the street stock division, winning eight features, including the first five of the season. But his championship campaign will also be remembered for the numerous “spin-cycle” skirmishes he had with longtime rival Al Relyea. Miller also chalked up his 45th career win in 2018.

Although the limited sportsman didn’t run for points in 2018, that will change in 2019 through sponsorship by Haun Welding. Drivers who made it to victory land more than once in 2018 were John Stowell (three), Michael Wagner Fitzgerald (two), Justin Buff (two), Stephen Kneer (two), Paolo Pascarella (two) and Derrick McGrew Jr. (two).

Many of the Albany-Saratoga regulars will be headed to Florida in February to compete in the DIRTcar series at Volusia County Speedway and the 602 crate sportsman series at North Florida Speedway.