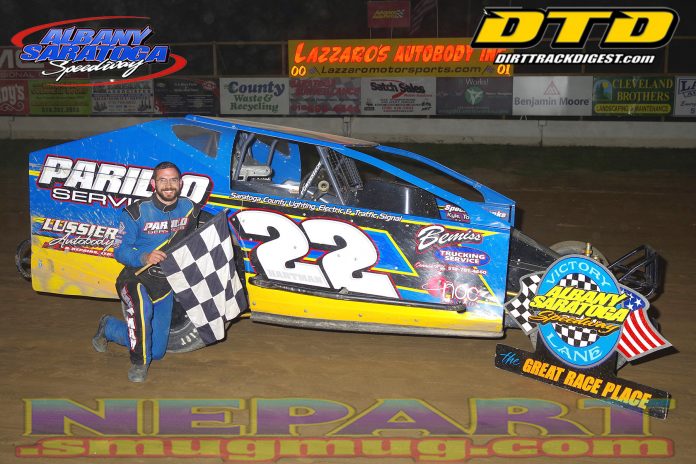 You can bet he doesn’t want to wait that long to get No. 2

With eight wins at three different tracks in 2018, including three trips to victory lane at historic Malta, Hartman Jr. pushed his career win total to 36, including 17 at Albany-Saratoga Speedway. But it was a race he didn’t win that proved to be the most important of the season.

Going into the final night of points at Albany-Saratoga, Hartman Jr. held a slim lead over Connor Cleveland, and promoter Lyle DeVore opted to run a 40-lap feature, with double points, for the sportsman.

Cleveland went on to win the race, while Hartman Jr. crossed the finish line fourth, just enough to give him the championship by six points.

You could hear the relief in his voice when he said, “It’s been a long week. I did what I came here to do,” after the race.

If Hartman Jr. was a thoroughbred race horse, he’d run with blinkers on. He doesn’t like to be distracted. He likes to stay focused on one objective, and not stray off his path until he’s reached that goal.

When Hartman Jr. locked up his championship on the final points night last season, he and his father, Tim Hartman Sr., made history, becoming the first father-and-son duo to win titles in the sportsman division at Malta. (Hartman Sr. was a three-time champion, in 2003, 2005 and 2006). According to Tim Hartman Sr., it was like the changing of the guard.

“I used to be Tim Hartman,” said Hartman Sr. when he and his son were honored for their historic achievement at Albany-Saratoga Speedway’s awards banquet. “Now, I’m Tim Hartman Jr.’s father. But that’s not so bad.”

The foundation for Hartman Jr.’s first championship was laid long before he first climbed behind the wheel of one of his father’s cars in 2009 and began racing in what was then called the budget sportsman class. “I grew up at Malta,” said Hartman Jr., a graduate of Florida Institute of Technology who works as a mechanical engineer at Knolls Atomic Power Laboratory in Niskayuna, N.Y. “I saw a lot and learned a lot before I ever got into a race car.”

But from the start, Hartman Jr. was a natural. He won his first feature at Albany-Saratoga on May 29 of his rookie season (in just his sixth career start), and two nights later, capped a memorable weekend with his first career win at Devil’s Bowl Speedway.

When former Albany-Saratoga Speedway promoter Bruce Richards decided to switch the Malta track over to asphalt in the 2010 season, Hartman Jr. started racing at Lebanon Valley Speedway, notching a pair of wins on the high banks before returning to Albany-Saratoga Speedway in 2012, when Lebanon Valley Speedway promoter Howie Commander began leasing the Malta track and put clay back on the racing surface. Hartman Jr. has also been to victory lane at Fonda Speedway and Accord during his 10-year career.

Half of Hartman Jr.’s career wins have come in the last three years. It’s no coincidence that the hot streak coincides with teaming up with car owner Mike Parillo in 2016.

“Getting the opportunity to race for Mike was the best thing that ever happened to me,” said Hartman Jr. “Before that, it was just me and my father, and it was starting to get to be too much for us.”

But with opportunity comes pressure, and Hartman Jr. knows that.

“I always feel there’s pressure,” he said. “No. 1, with a car owner like Mike, he provides me with nothing but the best of the best, in terms of equipment, and I know I have to perform.”

Then he added, with a smile, “And I’ve only got one championship. I’ve got to get two more to catch my father.”

Hartman Jr., who also picked up four wins in the second Parillo Services car at Glen Ridge Motorsports Park last year, will face his share of challenges in 2019. For starters, he’s got the champion’s bull’s-eye on his back at Albany-Saratoga, and drivers like Cleveland, Jeremy Pitts, Robert Bublak Jr., Chad Edwards, Jason Gray and Chris Johnson aren’t going to bow down to the king.

And now that the Parillo team has that championship at Albany-Saratoga Speedway under its belt, Mike Parillo would like to see how his team stacks up against the best in the rest of the state, meaning Hartman Jr. will probably be spending more time on the road this season, running in some sportsman tour races.

“Being in the record book with my father at Albany-Saratoga Speedway is something I’ll always be proud of,” said Hartman Jr. “But I’ve still got a long way to go.”