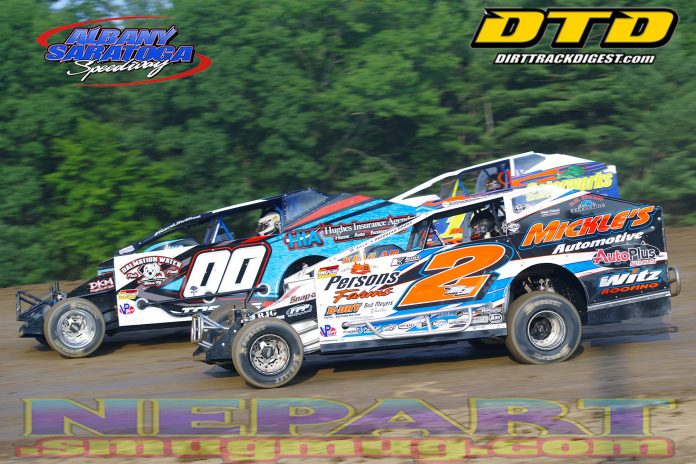 But, boy, the second generation driver would love to win a modified championship at Albany-Saratoga Speedway.

The 2018 racing season was a learning experience for Johnson, but if there’s something he’s always been, it’s a quick learner.

For years, the son of legendary dirt track driver Jumpin’ Jack Johnson was behind the wheel of someone else’s car. For over a decade, he drove for Hall of Famers Alton and Carole Palmer, winning his first modified championship at Fonda Speedway in the Palmer Service car in 2011. After parting ways with the Palmers, he teamed up with Jake Spraker, and in their first year together, in 2016, Johnson again won the modified point crown at Fonda.

But things changed late in the 2017 season, when the Johnson-Spraker team broke up, and last winter, Johnson announced he was going back on his own. He also decided to leave Fonda Speedway and began running on Saturday nights at Lebanon Valley.


It could have been a recipe for disaster. But thanks to some very dedicated sponsors and crew members, Johnson made it work.

But he knows it’s time to turn things up a notch.

“We’ve got to win more races, and ultimately, a championship,” he said. “We didn’t do that last year.”

Johnson is one of the most popular drivers in New York’s Capital District, and has a legion of fans at both Albany-Saratoga Speedway and Lebanon Valley. The 2RJ Teo chassis was one of the most consistent cars at both tracks last season, and Johnson came away with three victories at Albany-Saratoga, as well as four runner-up finishes. But a couple of off nights dropped him to third in the final point standings.

He finished tied for second in points with Keith Flach, 25 points behind champion Brett Hearn, at the Valley, despite not winning a feature on the high banks.

So he spent the winter trying to figure out why.

“I was the most consistent car at the Valley last year, but I wasn’t the fastest,” he said. “That kept me at the top of the handicapping most nights, so it made it hard to win races. So we went back over our notes and we’re going to focus on the areas that we felt we were lacking in.”

He also spent the winter in New York, while many of his competitors got a jumpstart on the season at the DIRTcar Nationals in Florida.

“Racing in Florida doesn’t make sense to me,” he said. “I see guys in victory lane with those big checks for $2,000. That’s what my father won when he was winning races in Florida in the 1980s.”

Winning races has never come easy for Ronnie Johnson, but there’s a good reason for that.

Throughout his entire career, he’s gone head to head with drivers like his father, Dave Lape, Ken Tremont Jr. and Hearn, all Hall of Famers (Hearn is just waiting for official designation). Here’s a little-known fact. Since the 2003 racing season, Ronnie Johnson has finished second to Hearn in 14 modified features at Albany-Saratoga Speedway.

When you’re racing against the best in the business every weekend, two or three wins a season is about all you can ask for. During a racing career that has spanned 22 seasons, Johnson has won in the neighborhood of 70 modified features, including 29 at Fonda and 27 at Albany-Saratoga.

But now, at the age of 45, Johnson is in a position to be the driver to beat.

“Racing has kind of changed for me,” he admitted. “I like to race where I can have my family and my crew and my sponsors with me, and where we can have fun. That’s very important to me.

“We’re going to have the same program as last year, Last year was the first year back on my own and I have good sponsors and a good crew that fit my program. We had some success last year, so it’s only fitting to give it another shot.”

He says he has a mix “of old and new equipment” that feature TEO chassis and Kevlar engines. “I’m satisfied with what we’ve got,” he said.

He must be satisfied, because if he wasn’t, he’d make changes.

The one change he can’t control will be if Hearn leaves Lebanon Valley to return to Orange County Speedway in Middletown on Saturday nights. Orange County officials have put together a hefty weekly purse, as well as a $40-000-to-win modified point fund, two factors that will be very enticing to the 60-year-old Hearn.

“I feel like I’m stepping up my program from last year at the Valley, and I don’t want to start winning and have people say I’m just winning because Brett isn’t there,” Johnson said.

Johnson admits he took a long look at the Orange County payoff structure.

“If it was 10 years ago, I could see me going there,” he said. “You could potentially run one track a week and make a living.”

Winning a modified championship at Albany-Saratoga Speedway, where his father was a three-time champion, would be very special for Johnson. When he began his racing career in 1997, as the age of 24, after serving as the crew chief on his father’s car since he was a teenager, Ronnie Johnson won seven features and the sportsman title at the historic Malta track.

Another crown has since eluded him, but he’s accomplished quite a lot for someone who only races on weekends (with the exception of one or two summer mid-week shows), who runs his own business and who always puts his family before his love for racing.

At this time of his life, racing can only come first if it’s a family affair.