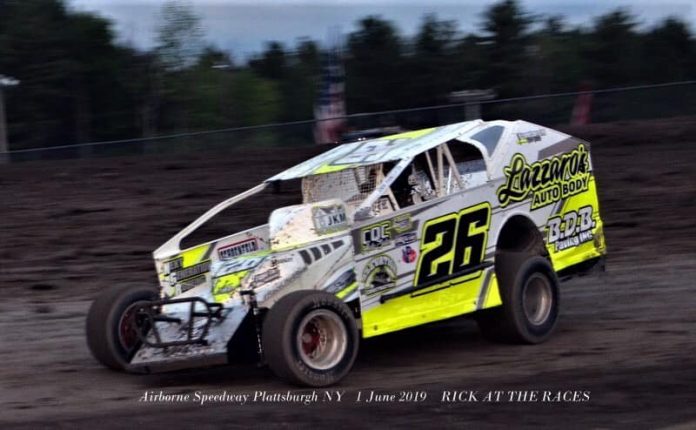 MALTA, NY – No one is really sure who came up with the proverb “Patience is a virtue.” But whoever it was obviously never met Derrick McGrew Jr.

The 12-year-old from Ballston Spa, who made history two years ago when he became the youngest driver to win a feature at Albany-Saratoga Speedway, will be moving up to the big block modified ranks for the 2020 season.

“Yeah, we got him a big block,” confirmed his father, Derrick McGrew Sr. “He wants to move up, and I think he’ll do well.”

McGrew Jr., who began a championship-caliber go-kart racing career in 2012, moved to open wheel cars in 2018, competing in the limited sportsman division at three area tracks, including Albany-Saratoga Speedway. On the night of July 28, he started on the pole at the Malta track and led all 25 laps of the feature to become the youngest winning driver in the history of the speedway.

His biggest challenge that night was making his way through lapped traffic. After the win, he said, “I was just hoping no one wrecked in front of me.”

He moved up to the regular sportsman division last year, and ran a full season at Albany-Saratoga, finishing 18th in points in a class that featured seasoned veterans and talented young stars, with almost all of them having more experience than McGrew. He had five top 10 finishes during his rookie season, including a second to Andrew Buff on the first night of “Malta Massive Weekend” in September.

Although McGrew Jr. didn’t win a race at Albany-Saratoga Speedway last year, he did record his first sportsman win in June at Plattsburgh Airborne Park.

“I’ve never pushed him,” said McGrew Sr. “Right from go-karts, he’s told me what he wants to do. Our plan with the sportsman was to run a couple of years and see how we were doing. The last two years, I think he’s done really well and shown a lot of promise. I wasn’t opposed to staying in sportsman, but he wanted to move up, and I’m just trying to do everything I can do to help him.”

Derrick McGrew Sr., who worked on the crews of both the legendary Jack Johnson and his son Ronnie before embarking on a driving career of his own, is no stranger to success in the sportsman division. From 2002 to 2016, he amassed a total of 22 wins at Albany-Saratoga Speedway, and won the sportsman championship in 2015. But he never got the opportunity to race a big block.

“I got overlooked because I didn’t move up,” said McGrew Sr. “If I had it to do over again, I wouldn’t have wasted so much of my time in a sportsman.

“With Derrick moving up to big blocks, hopefully we can open some eyes and get some help.”

“I’ve been really happy with DKM from the beginning,” said McGrew Sr. “We’ve got a really good relationship with them.”

McGrew Sr. said his goals for his son really haven’t changed much as Derrick Jr. moves to the premier class of dirt track racing.

“I’ll be happy with him just being consistent,” said McGrew Sr. “Our goal the first year was to finish in the top 10, and three weeks into the season, he was winning races. This year, I’d like to see some top 10 finishes and I’d be content to finish in the top 10 in points. But if I give him the right equipment, maybe we can get a win before the year is out.”