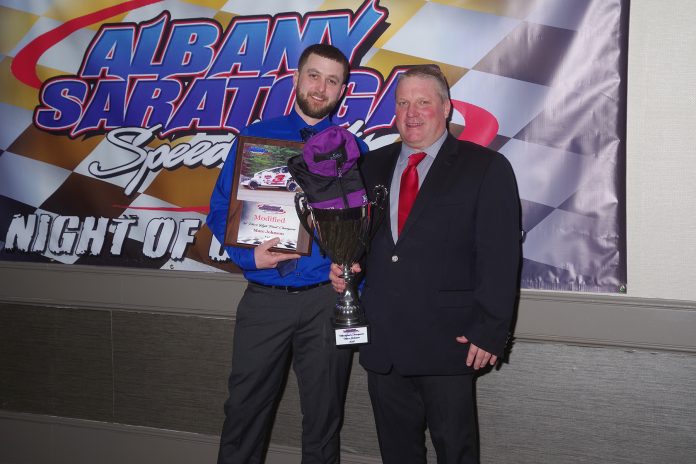 MALTA, NY – On a night when the 2019 track champions at Albany-Saratoga Speedway were honored, the biggest round of applause was for … a bathroom.

During his presentation to the packed “Night of Champions” crowd at the Saratoga Springs Holiday Inn on Friday, Albany-Saratoga Speedway promoter Lyle DeVore was noting changes that will take place in 2020.

“You’ll be happy to know that the women’s pit bathroom has been expanded and renovated,” he said.

Rock-concert-worthy shrieks and cheers erupted from the female members of the audience.

“It’s never easy at Albany-Saratoga,” said Johnson after picking up his champion’s trophy. “Believe it or not, this one (championship) was more nerve-wracking than the first one. But I have the best crew I’ve ever had and all season, we worked on one thing, winning a championship. Hopefully, we’ll get more.”

For the third year in a row, Cleveland was locked in a tight points battle that went right down to the wire. But this time, because of the misfortune suffered by Tim Hartman Jr. in the final weeks of the season, Cleveland came out on top.”

“This isn’t really the way I wanted to get the championship, but I’ll take them any way I can,” said Cleveland, who had 14 top-10 finishes on his way to the title. “We stayed up on our maintenance this year. We traveled around a bit, and worked on different things everywhere we went, and I think it helped us at Albany-Saratoga. To drive through the field at Albany-Saratoga every week is a huge accomplishment.”

Coonradt, a third-generation driver who went on to win the pro stock race at Oswego during Super DIRT Week following his successful season at Albany-Saratoga, had to make some compromises to win his first crown.

“This year, it seemed like we were swapping the points lead every week, and it really got to me,” he admitted. “There were times I held back so I didn’t lose any points. It’s more fun just running to win. We did what we came to do this year, but next year, we getting back to having fun.”

After receiving his trophy, Bokus, who had two wins in 2019, admitted he isn’t looking forward to graduating to the regular sportsman division. Asked if he was ready to move up, he answered, “No, but I’ve got to. I’ll try not to get in anyone’s way.”

Reylea, who had four street stock wins, admitted that age is starting to catch up with him. “It’s getting tough,” he said. “I have to thank my wife. She’s been with me for 37 years. I guess she likes me.”

Jordan became just the second female to win a division title at Albany-Saratoga Speedway, following in the footsteps of Lori Cary. “Overall, this was a great season,” said the teenager. “I couldn’t have asked for a better season.”

Frame finished the year with seven wins, and had it not been for a couple of mechanical problems, might have gone undefeated in the dual cam division. “There was a lot of pressure on me,” he said. “Steve Ryan made this car what it was. I had big shoes to fill.”

A number of special awards were also presented.

The Spirit Award, given to the person or persons who “help make The Great Race Place great” went to journalists Don and Joann Davies. “The passion they have for racing, and especially racing at Albany-Saratoga Speedway, is like no one I’ve ever met,” said DeVore.

Besides collaborating on a weekly column in Area Auto Racing News with her husband, Joann Davies is also a familiar face in the ticket booth at Albany-Saratoga Speedway.

Although DeVore deserves much of the credit for getting Albany-Saratoga Speedway back on track since Howie Commander took over the operation of the track in 2012, he knows it’s a team effort, giving credit to his fiancée, Marcy, and her daughter, Mia.

“This business is a tricky business, a hard business,” he said. “Marcy and Mia live with me, we’re a family and we do everything together. There are nights we just sit around brainstorming, coming up with ideas and promotions. Without them, I wouldn’t be where I am today.”

The other special honor went to sportsman driver Pat Jones, who won the championship of the inaugural VP Racing Fuels Sportsman Series.

Track announcer Dan Martin, who shared emcee duties with fellow announcer Mike Warren, also took time to thank the track’s major sponsors and supporters. They included Greg Davis of Greg’s Towing and Repair, which sponsors the four-cylinder division; Ron Mensing, who has watched his Native Pride series grow to the point where it now includes all divisions; Dean Seelow of Dean’s Electric, who sponsored the Dean’s Electric Sportsman Series; Warren Kelly of Haun Welding, the title sponsor of the limited sportsman division; Bart DeRosha of Bart’s Contracting, who has helped transform the season openers at Albany-Saratoga into high-dollar, extra-distance shootouts; John Ray & Sons, which “came on in a big way this season,” according to Martin; Phil Heitmann of Lake Auto Parts, the primary sponsor of the street stock division; Mangino’s GMC, which provides the track’s safety truck; Chris Grady, the driving force behind “Nostalgia Night” and the Malta cruise-ins; and Ray Sefrin, promoter of Glen Ridge Motorsports Park. “There are enough tracks working against each other,” said Martin. “We’re lucky to have Ray and his team working with us.”

Several drivers were recognized for providing “Malta Memorable Moments” in their respective divisions. Those awards went to Scott Towslee, who holding off Coonradt to record his first career pro stock victory; John Filarecki, who shared the top spot on the street stock win list with four victories; David Boisclair, who held a tight inside line to win a thrilling limited sportsman feature; Mike Coffey Jr.; who battled side-by-side with Hartman Jr. for three laps before coming away with a sportsman victory; and Marc Johnson, who went around the outside of Rocky Warner coming out of the fourth turn on the final lap to get his only modified win of the season. After watching the video of the win, Warren joked to Johnson, “Is that the first time you’ve passed anyone of the outside?”

DeVore thanked all of the drivers for their perseverance in a trying season, which saw five rainouts in the first six weeks of the season, following by a record-setting 22 consecutive nights of racing. “Kudos to you guys,” DeVore said. “I know it was a struggle. But it was very rewarding to see each and every one of you step up to the plate and come back racing every week.”

Looking ahead, DeVore said the 2020 season with begin with inspection and practice on April 10, with the season opener scheduled for April 17. Although Brett Hearn will no longer be a Friday night regular at Albany-Saratoga after going into semi-retirement as a driver, he will bring “Big Show 12” back on Tuesday, June 23, and DeVore is planning another “Malta Massive Weekend” to cap the season. “This one will be ever more massive,” he said.

The remainder of the schedule is still being finalized. “We’re working to get as much sponsorship money as we can,” said DeVore.