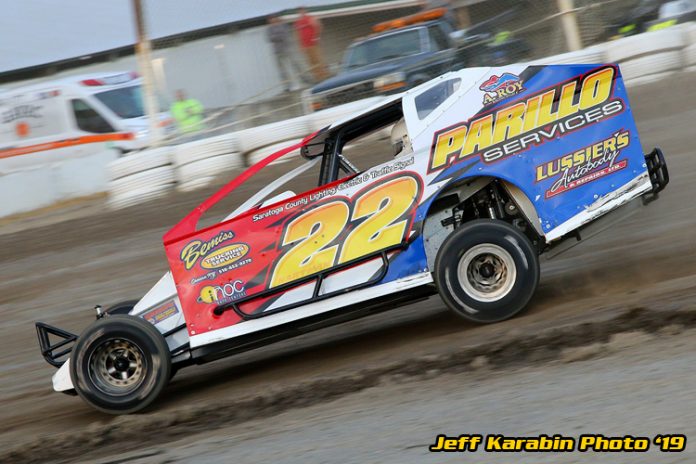 RUTLAND, VT – The King of Dirt Series is ready for 2020. A new feeling of excitement has been pumped into the tour, and the new, highly anticipated, five-race King of Dirt Racing (KOD) Crate Modified Series schedule will bring the tour to four prestigious tracks in New York and New England.

King of Dirt Racing features the wildly popular Sportsman-type dirt Modified stock car and the economical General Motors “602” crate engine package. KOD events are among the highest-paying Sportsman-level races in the Northeast, and every event on the five-race slate is a highlight. The KOD schedule is kept short by design, offering an affordable touring series alternative for grassroots dirt track racers.

The season opens at the fast, half-mile Devil’s Bowl Speedway in West Haven, Vt., for the fourth consecutive year, running the 50-lap “Memorial Day Kickoff” on Sunday night, May 24. Bobby Hackel earned $1,750 for winning the 2019 edition, and drivers received a minimum of $150 to take the green flag. Devil’s Bowl also hosts the second KOD event on Sunday, August 9, as the 40-lap “Leon Gonyo Memorial” is again held in conjunction with the “Battle at the Bowl” Big Block/Small Block Modified Challenge.

The month of September will be one of the most memorable runs in King of Dirt Racing history, as a three-week stretch of major events wraps up the calendar.

The prestigious 50-lap “Northeast Crate Nationals” will be held at the legendary Fonda (N.Y.) Speedway on Saturday, September 19, in support of the high-profile “Fonda 200” Modified race. The Nationals race has grown to become King of Dirt Racing’s signature event and will be run for the 11th time in 2020. Tim Hartman Jr. collected $2,000 for his third career Nationals win last fall.

Finally, the 2020 championship will be decided at KOD’s momentous return to Albany-Saratoga Speedway in Malta, N.Y., on Friday, September 25. The “Great Race Place” has hosted more King of Dirt events than any other track, and the return to the 0.4-mile oval is a key addition for the tour. The KOD curtain-closer comes during the second annual “Malta Massive Weekend,” which also includes the new Street Stock Six Pack Series championship finale on Friday and the Super DIRTcar Series Big Block Modifieds on Saturday.

King of Dirt Racing promoter Mike Bruno expects the new schedule to fuel a competitive season with big stages for the drivers to compete on. “We are so excited to get the King of Dirt schedule rolling in 2020,” Bruno said. “The schedule is manageable for racers, and the races are all part of big, meaningful events. I’m honored that KOD will be making history at New Hampshire Motor Speedway, and I’m thrilled to be back at Albany-Saratoga. The events at Fonda and Devil’s Bowl in 2019 were outstanding, too. I appreciate the relationships and support that we’ve built with the track promoters as an independent series, and we’re looking forward to giving the race teams a great tour.”