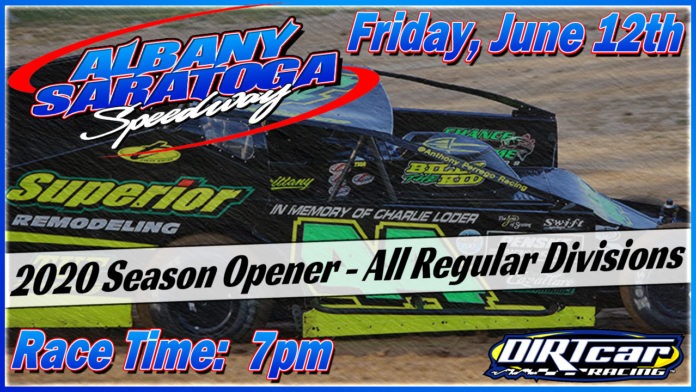 MALTA, NY – After a delay of almost two months because of the long-range effects of the COVID-19 pandemic, Albany-Saratoga Speedway will begin its 2020 racing season on Friday, June 12.

Adhering to New York State guidelines concerning mass gatherings, the grandstands will be closed to spectators. Racing fans can see all the action on Dirt Track Digest’s streaming service. Cost of the pay per view for the Albany-Saratoga Speedway opener will be $21.99. Racing will begin at 7 p.m.

Drivers and crew members must follow New York State and CDC protocols regarding face coverings and social distancing in the pits.

Marc Johnson will be returning to defend his modified point championship. At last week’s practice sessions, Johnson was consistently turning the quickest laps in the premier division, with Matt DeLorenzo, expected to be one of the Johnson’s primary challengers for the crown this season, just a few ticks back on the clock.

Also looking to be in midseason form was 13-time champion Ken Tremont Jr., although his lap times weren’t being recorded via transponder. Tremont will be trying to win the modified title for the first time since 2015.

A revised 2020 racing schedule will be available soon, according to promoter Lyle DeVore.