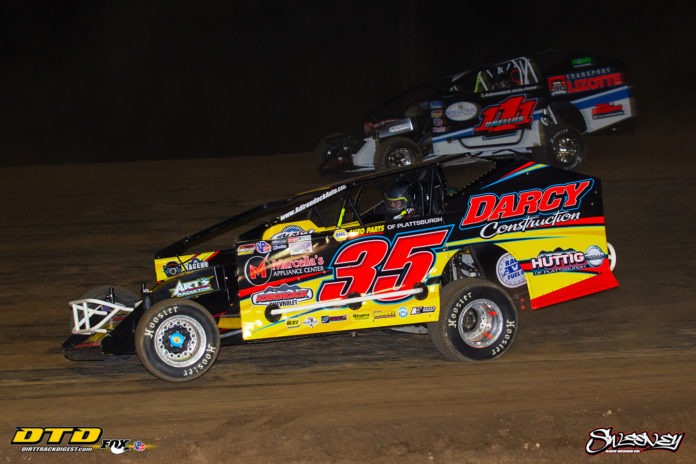 Jackie Brown Jr. and Kenny Tremont went to battle at the start of the 35-lap Modified feature, side-by-side for the first handful of laps. A lap five yellow solidified the lead for Brown, as Tremont headed pitside with a flat left front tire. This put Keith Flach, Rocky Warner, and Ronnie Johnson behind Brown for the restart, with Flach getting a great jump and taking the lead.

Johnson and Warner quickly followed Flach’s path, sliding by Brown and into second and third. The top three remained comfortable for a short moment, up until Flach hopped the cushion and handed Johnson the lead on lap 11. However, Flach fought back on the bottom and regained the spot for a moment.

Mahaney was running fourth when Flach hopped the cushion, but through the lead exchanges and lapped traffic, Mahaney dove under everybody to lead lap 14. A yellow one lap later saw Flach exit stage right, the second top-five driver to pit with a flat left front this race.

Friesen broke a shock in his heat race and started 33rd, last. Picking off cars early and often, Friesen was in the top five before halfway. After a short battle, Friesen ripped the top around Johnson and into second on lap 22, then dropping low and mirroring Mahaney’s line around the bottom. Mahaney was fast, but Friesen only had one car left to pass.

Through the final ten laps, Mahaney worked traffic flawlessly and gave Friesen little chance to gain free time. With both leaders opting for the same lane and a smooth drive by Mahaney, the gap stayed a constant 1.5 seconds through the waning stages. When the checkered fell, it was Mahaney scoring the opening night victory at Albany Saratoga, followed by Friesen, Johnson, Peter Britten, and Warner.

“I didn’t even know Friesen was second, but I assumed it,” Mahaney said. “We had a fast, fast race car and the dominant line, so I knew we would be real hard to beat regardless of who it was. If I kept focus and didn’t have anything bad happen to me, I knew we’d be just fine.”

Mahaney’s march to the lead was rapid, driving from fourth to first in a handful of turns. With new inside walls around Albany-Saratoga, Mahaney took advantage of others having run-ins with the new concrete to advance.

“We were fifth on the restart after Tremont dropped out with his flat left front, then got to fourth pretty fast,” noted Mahaney. “I was following Flach after he went to the bottom and he hit the inside wall, so I drove under him and got that pass done. We had a great car on the bottom, so next thing I know I’m by Ronnie and leading.”

Friesen made an unannounced appearance, and following a last-place finish in his heat thanks to mechanical issues, Friesen had to pass over 30 cars en route to his final position.

“At first, we’re just trying to survive and not crash starting way back there,” said Friesen. “With some early wrecks, we got to 14th by lap five, and at that point I started thinking win. You got to have some fortune on your side and miss the jingles, we had that tonight.”