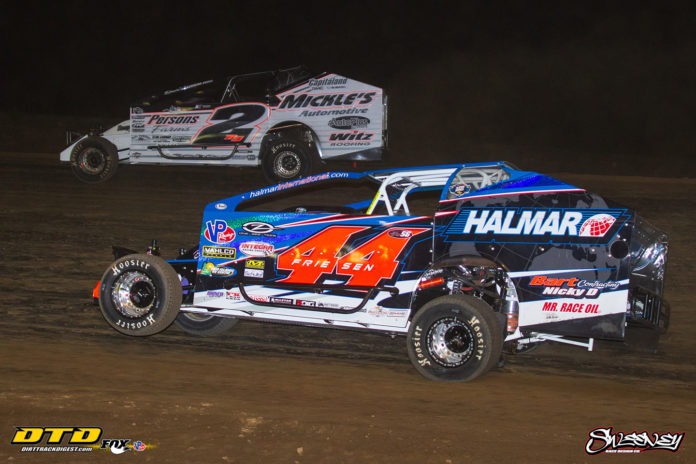 MALTA, NY – In last week’s Albany-Saratoga Speedway season opener, Stewart Friesen passed 30-something cars en route to a runner-up finish. With no heat race issues this week, Friesen only had to pass twelve cars to get to the front, storming to the lead just after halfway and cruising to the win.

Jessey Mueller chased James Meehan in the opening stages of the 35-lap Modified main, with Meehan holding steady out front in the first handful of laps. Behind Meehan and Mueller, Kenny Tremont was looking for redemption after an early exit last week, with Tremont snatching third by lap seven. Further back, last week’s top two of Mike Mahaney and Friesen were on the charge, closing in on the top five by lap ten.

Up front, Meehan knew he had to work if he wanted his first Modified win, as Mueller and Tremont were all over him by lap 12. However, Meehan kept peddling hard up top, holding off Mueller and Tremont, with Tremont grabbing second on lap 16. A halfway yellow let Tremont restart alongside Meehan, with Mahaney and Friesen now inside the top five.

On the restart, Meehan and Tremont touched wheels down the frontstretch, with both drivers launching off the top of turn one and Tremont going for an absolutely violent flip. Thankfully, Tremont walked away, but this meant a new front row of Mueller and Mahaney lined up for the following restart.

Mueller got the jump on the green, with Friesen skating by Mahaney and into second. From there, Friesen wasted little time riding behind Mueller, with a slider to take the lead on lap 19. Once out front, Friesen railed the top and pulled away.

A lap 26 caution bunched the pack up, but Friesen left the party and isolated himself in the lead. The restart meant Mueller and Mahaney had new friends to fight with for second, being Matt Delorenzo and Mat Williamson in the Behrents #3. While second on back battled, Friesen walked away and took the victory in the 35-lap Modified main event. Mahaney nosed out Williamson for second, with Mueller dropping to fourth on the last lap, and Delorenzo rounding out the top five.

“It’s pretty awesome, we made changes after the dash for cash they had earlier and seeing what the track did,” Friesen said. “We started to cook the tires at the end, but our car was a 35-lap horse and it got us there. It was a wild race, I about spun out by myself and the caution came out right after, and some stuff happened with the leaders on a restart. Everything just went our way tonight.”