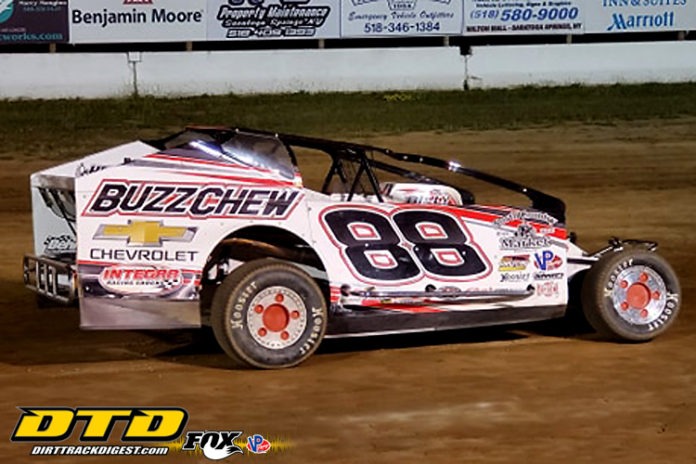 MALTA, NY – Mat Williamson earned his first career victory at the Albany-Saratoga Speedway on Friday night in the 358 Modified feature event.  Piloting the Buzz Chew 88 machine, Williamson methodically worked his way through the field from his 15th place starting position to grab the lead from Keith Flach on a restart with only 9 laps to go.

From that point on Williamson set sail and pulled away to claim his first ever victory at the speedway.  Keith Flach held on for second after holding off a hard charging Stewart Friesen.  Matt Delorenzo was fourth and Anthony Perrego crossed the line in fifth.

When asked about winning his first feature at Albany-Saratoga in Victory Lane Williamson stated “It’s pretty awesome.  This is one of the places we marked on the bucket list.  It’s so cool to race here.”  After a two week stretch in the states, Mat will head back home to Canada after picking up the win “Tomorrow morning we’re going back north and we’re gonna have to quarantine for two weeks, so this gives us something to think about.”