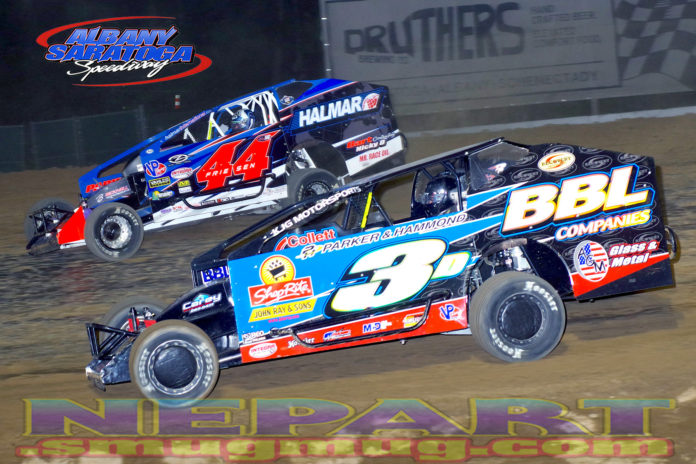 MALTA, NY – Stewart Friesen picked up his 2nd win of the season and 17th career win on Friday night at the Albany-Saratoga Speedway, tying Richie Evans on the all time win list.

Brian Berger and Ricky Davis brought the field to the green flag with Berger jumping out to the early race lead. Berger powered to the top spot but lurking back in the middle of the pack was the 44 machine of Friesen, who, by lap 4 had made his way from his 16th starting position to the 12th spot with Mike Mahaney and Peter Britten following closely behind.

By the 8th lap, Friesen moved around the 115 of Kenny Tremont on the outside of turns 3 and 4 to make his way into the top 10.

While Friesen was working his way through the field, Ricky Davis was reeling in the race leader, Brian Berger and by lap 10, was starting to put pressure on the Berger mount. Davis completed the pass on the bottom on lap 11, but was unable to really stretch out any kind of lead.

On lap 13, the bad luck bug that has struck Kenny Tremont all season at Albany-Saratoga struck again as Tremont slowed down the backstretch and headed pitside.


At the midpoint of the race the cars of Brian Berger and Ricky Davis were putting on a great side by side battle for the lead, with Berger holding the advantage on the top side of the speedway, but while they battled, Stewart Friesen was reeling them in.

A yellow flag on lap 18 for a spinning Jeremy Pitts machine would put the 44 of Friesen right on the back bumpers of the leaders. On the ensuing restart, Friesen made his way past Davis, then by Berger on the very next lap and began to stretch his lead.

While Friesen was stretching his lead, the 97 of Bobby Hackel was making headway around the top and moved into the third position on lap 22.

A yellow on lap 27 would bunch the field back up and allow the 3J of Marc Johnson to move between both Hackel and Berger to claim the 2nd spot.

Unfortunately the yellow flag would fly once again as early race leader Ricky Davis slowed on the fronstretch and collected the 32 of James Meehan.

On the restart Bobby Hackel powered around the outside of Peter Britten for the fourth spot, but another yellow would slow the field again as Matt Depew spun in turn 4. On the restart, Britten was able to retake the 3rd spot from Hackel and hold it all the way to the checkers.

In the end, it was Stewart Friesen taking the win over Marc Johnson, Peter Britten, Bobby Hackel and Jack Lehner.

The pro-stocks ran for $1,000 to win as part of the Native Pride program, ad produced a scary finish.

Chad Jeseo, who earlier in the night had won a $200 bonus in the STTC Pro Stock Dash for Cash, and Scott Towslee were running side by side for the final five laps of the 25-lap feature, following a yellow flag on lap 20, with Jeseo on top and Towslee hugging the bottom.

Coming through the fourth turn for the final time, Towslee drifted up and made contact with the front of Jeseo’s car, sending both cars into the outside concrete wall. Jeseo’s car took the brunt of the contact, climbed the wall, and rolled into its roof, with a fire breaking out in the engine compartment.

After a few anxious moments, the fire was extinguished and Jeseo crawled out of his car.

That contact between Towslee and Jeseo allowed Luke Horning to mash the gas, and beat Towslee to the checkered flag. Josh Coonradt finished third.

The 25-lap sportsman feature also featured some great racing, with Brian Calabrese recording his first win of the season. In the final few laps of the race, Calabrese made his car as wide as possible, doing everything he could to hold off defending champion Connor Cleveland. Andrew Buff got past Cleveland on the final lap for the No. 2 spot.

Jeff Meltz started on the pole and led flag-to-flag in the 25-lap street stock, which paid $500 to win through sponsorship by N3 Motorsports. Meltz had to survive a couple of late restarts, but easily posted his second straight win, beating Hunter Sanchez to the checkered flag by .75 seconds.

Travis Witbeck chalked up win No. 2 in the 25-lap Haun Welding limited sportsman feature, while David Frame remained undefeated in the four-cylinder class, picking up his fourth win in as many tries. Steve Ryan finished second overall, and had the first single-cam car across the finish line.