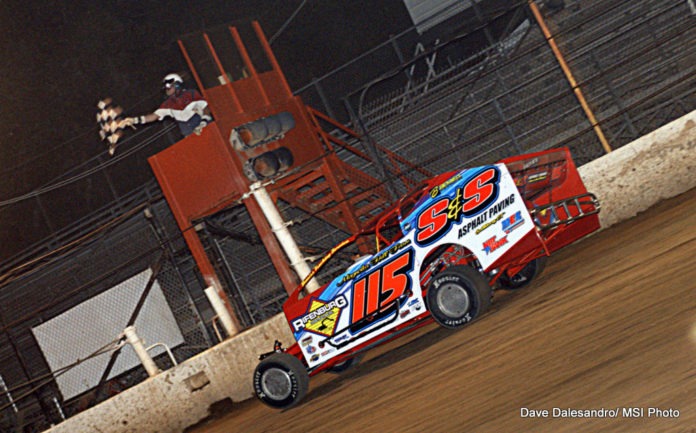 MALTA, NY –  It’s no secret it has been a rough start to the 2020 season for Kenny Tremont at “The Great Race Place.”  Twice this season he’s been leading only to be bitten by bad luck, costing him potential wins.  That all changed on Friday night as Tremont was able to shake the bad luck bug off his back and earn his 70th career modified victory at Albany-Saratoga.

Jimmy Cotrell and Justin Barber would lead the field to the green flag, but Kenny Tremont wasted little time jumping out to the early lead from his 3rd place starting position, taking the lead in turn 2 on lap 1.  With Tremont safely in the top spot, Jack Lehner quietly made his way into the 2nd position and by lap 7 was starting to pressure the 115 of Tremont.

On Lap 8, Lehner completed the pass on the Tremont machine and took the top spot away but the yellow flag flew for Jackie Brown and Danny Varin who made contact on the front stretch.

On the restart it was Marc Johnson who made some moves and got his new Bicknell up in to the 5th spot from his 14th starting position.  On the 11th circuit Johnson moved his way past the Rocky Warner mount and got himself to the 4th position.


Through the middle of the race there was a bit of “yellow fever” as cautions would fly on lap 12, lap 14 and lap 15 for spins.

Once racing got back going again it was Tremont who jumped out to the lead with Jack Lehner in tow.  With Tremont high and Lehner low they battled for the top spot with the “Sand Lake Slingshot” pulling ahead by 10 car lengths.

When the leader hit lapped traffic it allowed Jack Lehner to again close within a couple of car lengths but Tremont held strong until the caution flag flew again on lap 29 for the slowing Matt Delorenzo machine.

The clean race track was all Kenny Tremont needed to secure his 70th career win at the Albany-Saratoga speedway as he cruised to victory over Jack Lehner, Jessey Mueller, Rocky Warner and Mike Mahaney.

In victory lane, Tremont was happy to finally put all the pieces together “My confidence has taken a shot right in the cellar.  I’m thankful for the guys and this team. I’ve got a good team, it’s just a matter of putting the pieces together.

Asked about whether or not this victory could give the 115 team the momentum they are looking for “I certainly hope so” said Tremont.  “Anything would be better than what we’ve been doing.”