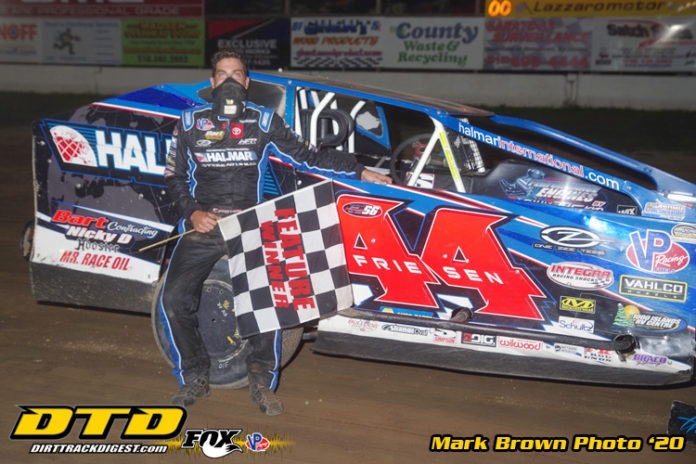 MALTA, NY – Stewart Friesen continued his hot streak on Friday night at the Albany-Saratoga Speedway.  This time it came down to the final lap, but Friesen had just enough to score the $3,200 win in the Stan Da Man feature.

The green flag came out with James Meehan and Matt Depew leading the field for the start of the 32-lap main-event.

Don Ronca was fast early getting by Meehan and charging after Depew for the lead, but caution flew as David Schilling spun.

When the green came back out, Marc Johnson moved up to third while setting his attention on Depew.

On lap five Johnson rolled by Depew to take the lead.  As he made his move at the front, Anthony Perrego moved his way into the top five for the first time.

Perrego worked forward finally getting by Depew for the second spot just before the halfway point.

At this point, Friesen was on the charge after starting deep in the field.  On lap 18 Friesen went by Perrego for second with his full attention now placed on Johnson at the front.

Friesen caught Johnson on lap 25 and began applying pressure.  Each time Johnson was up to the task.

Then, on lap 30, the caution came out as Drew Cormie went around.  This setup a two lap dash to the finish.

When the green came back out it was a side-by-side race between Johnson and Friesen.  Johnson edged Friesen on lap 31, but on last lap coming off of turn four Friesen had enough momentum to pass Johnson to get the race win.

Friesen said in victory lane “man I really wanted to win this for the Devore family.  It means a lot.  Now I’m hoping to get a win in the trucks.“

Jack Speshock recorded his first win of the season in the 25-lap sportsman feature, a race that had a closer finish than the modifieds. Travis Bruno started in the front row and took control of the race, but when Bruno got into traffic, Speshock, who started seventh, made his move. Using the low line, Speshock closed in on Bruno and the two were running side by side with two to go. Speshock then snatched the lead coming out of the second turn and held off Bruno by .079 seconds. Joey Scarborough was third, and was followed by Thomas Van Vorst Jr. and Tim Hartman Jr.

Speshock earned $1,000 for the win, with the extra cash coming from race sponsor John Ray & Sons.

Luke Horning bounced back from an early spin and posted his second win of the year in the 25-lap sportsman feature. Horning started 14th in the feature, but on the first lap, spun around on the first turn and collected Chuck Dumblewski.

That caution flag proved to be an omen, as the race was slowed by seven yellow flags, each one helping Horning make up ground.

On the seventh restart, which came on lap seven, Horning moved by leader Brandon Emigh, but Emigh wouldn’t back off and was back out in front two laps later.

But this one was far from over, especially when the field started to click off green flag laps. Horning moved back out on the point on lap 11, but soon had Josh Coonradt to contend with, as Coonradt took over the No. 2 spot on lap 15.

The two were dead even as they passed under starter Rich Peterson on lap 21, but Horning then gained a slight advantage the next time around, and this time, he stayed out front, getting a little breathing room in the closing laps.

Following Horning and Coonradt across the finish line were Emigh, Kim Duell and Dean Charbonneau.

Travis Witbeck walked off with his third win of the year in the 20-lap Haun Welding limited sportsman feature, taking the lead away from Scott Bennett on lap 16. Josh Bussino was third.

Hunter Sanchez worked his way around Jeff Meltz Sr. coming out of the fourth turn to take the white flag and came away with his first win of the year in the 15-lap street stock feature. Defending track champion Al Relyea had taken the lead on lap five, but Meltz used a restart on lap 10 to move out in front. When Relyea blew a tire with two go, Sanchez was in position to make his move on Meltz in the final two laps.

Steve Ryan, driving a single-cam car, picked up the victory in the 15-lap four-cylinder division, while David Frame was second overall and had the first dual-cam car across the finish line. The top two were followed by Damian Ward, Wayne Russell and Bradley Batho.