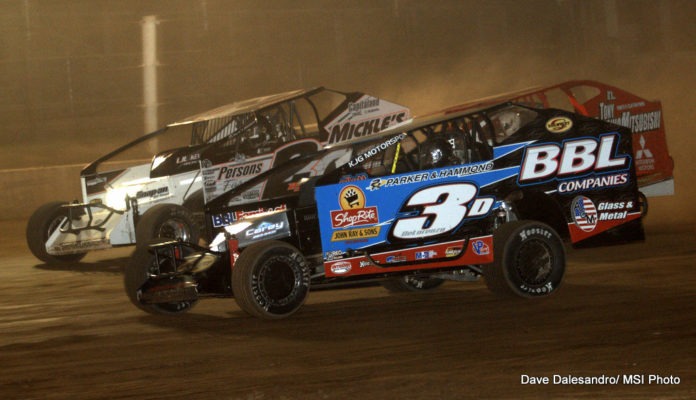 DeLorenzo ran a flawless race and survived a couple of late restarts to pull away from Johnson and chalk up his first win of the season in the 35-lap modified feature that highlighted John Grady Memorial Night Friday at Albany-Saratoga Speedway.

Because of extra purse money put up by Chris Grady in memory of his father, the longtime track photographer at the historic Malta track, DeLorenzo walked off with $3,000.

The win was his first in over a year. The last time he celebrated in victory lane was June 28, 2019.

“I knew that Marc liked running the top so I figured I would run the top to see how my car was and I liked it,” said DeLorenzo.  “I ran with it all night.”

While Matt Depew, who started on the outside pole, set the early pace, DeLorenzo was quickly working his way forward from his seventh starting position. It only took him 11 laps to move into second, and he and Depew started to put on a show, with Depew running the top and DeLorenzo sticking to the bottom in a two-car breakaway.

On lap 20, the leaders came up on the lapped car of Vinnie Visconti, and DeLorenzo had to move up, into Depew’s tracks, momentarily breaking his rhythm. But as soon as he could, DeLorenzo moved back to the bottom, and passed Depew for the lead coming out of the fourth turn on lap 23.

Johnson, who has been on fire since switching to a Bicknell chassis three weeks ago, was sitting third when CG Morey fell off the pace on lap 24, bringing out a yellow. On the restart, DeLorenzo switched lanes, moving to the top, and Johnson snaked past Depew for second.

Two more restarts put Johnson right next to DeLorenzo, but each time, DeLorenzo got the jump, remained right against the cushion, and beat Johnson to the finish line by .980 seconds.

“I felt if I ran the top, it would be harder to make a mistake,” sad DeLorenzo, who also drives a Bicknell. “It’s harder to hold the inside. I felt if I could get into the brown on the restarts, I could get the jump on Marc. He was ducking under me, and I didn’t want to screw up.”

Johnson had no regrets about finishing second for the second week in a row. “He was just good,” he said of DeLorenzo.

Three-time winner Stewart Friesen was a no-show, campaigning his Halmar-Friesen truck in the NASCAR Gander RV Truck Series in Michigan. His wife, Jessica, substituted in the Halmar big block and finished 13th.

Tim Hartman Jr. recorded his third win of the season in the 25-lap sportsman feature to pick up the top prize of $1,000. More importantly, the win was the 25th of Hartman’s career at Albany-Saratoga, moving him into a tie with his father, Tim Sr., for second place on the all-time win list in that division.

Hartman Jr. looked almost unbeatable Friday night. Despite starting 12th in the 30-car field, he only needed 11 laps to get the lead and was never seriously challenged after that, finishing a second-and-a-half ahead of runner-up Marty Kelly III, who started on the pole. Kelly III was followed by Brian Calabrese, Mike Coffey Jr. and David Boisclair.

Defending track champion Josh Coonradt picked up his second win of the season in the 25-lap pro stock feature, and also took home $1,000. The win was Coonradt’s first since June 19, and didn’t come easy.

Luke Horning, making a bid for his second straight win, made a great three-wide move around the outside to take the lead on lap seven, and Coonradt, who had started ninth, followed in Horning’s tire tracks in the top groove and took over the No. 2 spot on lap 15.

Coonradt got the break he needed on lap 20, when a three-car tangle in the first turn brought out the yellow flag. When the green came back out, Horning, still against the cushion, bobbled going down the backstretch. Seeing an opening, Coonradt hugged the inside and grabbed the lead coming out of the fourth turn.

Defending track champion Al Relyea finally got his first win of the year in the 15-lap street stock feature. Relyea took the lead for good on lap six, but survived heavy pressure from Jeff Meltz Sr. Relyea had the advantage through the third and fourth turns, which allowed him to hold off Meltz and take home a top prize of $300.

Dylan Madsen, who didn’t start racing until mid-July, quickly reached a career milestone, posting his first victory ever in the 20-lap limited sportsman feature. Madsen, campaigning the car that Brett Hearn used to drive at Albany-Saratoga, had to hold off a late charge from Shane Larman. Yule Cook finished third.

The night was marred by a horrific wreck in the limited sportsman heats. Jared Powell lost control of his car coming out of the fourth turn, climbed the front stretch wall and flipped onto his roof, in front of oncoming traffic. The car of Scott Bennett then slammed into the rollcage of Powell’s upside down car. Powell was gingerly removed from his wrecked car and taken to a local hospital for observation.