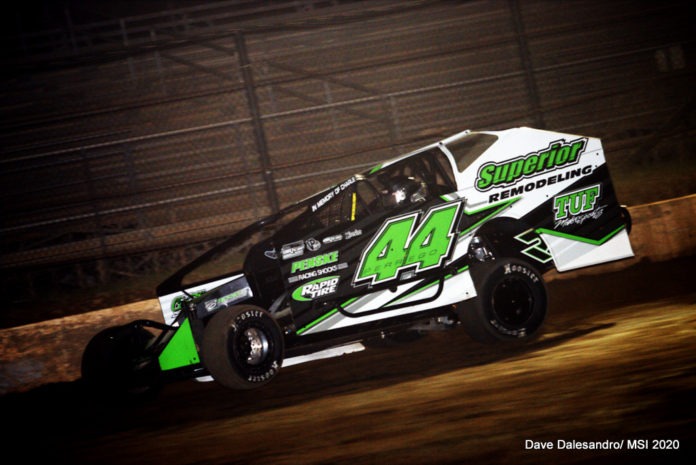 Anthony Perrego, one of the many recent converts to the Bicknell chassis, outdueled 13-time champion Kenny Tremont Jr. during a final six-lap shootout to record his first win of the season Friday night in the 35-lap modified feature at Albany-Saratoga Speedway.

Perrego, who started 14th in the 30-car field, needed 19 laps to get to the front and looked like he was on his way to an easy win until two late restarts bunched the field.

The final yellow came out on lap 29, when the front end of Marc Johnson’s car collapsed in the fourth turn. Four laps earlier, on a restart, Johnson, who was looking for his second straight win in his month-old Bicknell, and Adam
Pierson tangled in the second turn. Johnson quickly ducked into his pit and his crew did some quick repair work, sending Johnson back out to collect points. But the front end didn’t hold up, bringing out the yellow on lap 29.

Perrego got the jump on Tremont on the restart and then found a perfect line, running low in turns one and two to block Tremont’s path, and then moving high in turns three and four to pick up momentum heading down the front straightaway.


Perrego maintained that line for the last five laps, beating Tremont to the finish line by .237 seconds.

“Kenny was good on the bottom, but I got a good restart on the outside,” said Perrego, who has been a regular at Albany-Saratoga this season while maintaining his Saturday night home at Orange County Speedway in Middletown. “Once I got in front, I knew Kenny would be coming. He really knows how to get around this place.”

“Early on, I wasn’t going for beans on the top, but on one of the restarts, I wound up on the bottom and the car just took off, so I stayed there,” said Tremont.

Perrego began the season with a TEO chassis, but made the switch to Bicknell on July 31. The win Friday was his second career victory at Albany-Saratoga, as he also took the checkered in the $5,400-to-win “Come N Get It” feature that was part of Malta Massive Weekend last September.

Jack Lehner got by Keith Flach on the final lap and finished third, while points leader Mike Mahaney moved a step closed to the modified championship with a fifth-place finish.

The points will certainly be shuffled, as Marc Johnson, who went into the night just eight points behind Mahaney, officially finished 23rd, and Stewart Friesen was a no-show because he was competing in the NASCAR Gander RV Truck Series race in Dover. Unofficially, Matt DeLorenzo, who finished sixth Friday night, moved into second in the points chase, 32 points behind Mahaney.

The night wasn’t a complete loss for Johnson, as he won the Service Tire Truck Center Dash for Cash, which was worth $200.

Andrew Buff picked up his second win of the year in the 25-lap sportsman feature, doing everything in his power to hold off points leader Tim Hartman Jr.

Buff had started ninth and only needed five laps to get to the front, taking the lead away from Jon Miller coming out of the fourth turn.

But all eyes were on Hartman Jr., who had started 14th. He was up to third when a yellow came out on lap 16, and on the subsequent restart, he rocketed past Miller for second. Even when Buff and Hartman got into heavy traffic with two laps, Buff refused to make a mistake, and easily held off Hartman Jr. Completing the top five were Connor Cleveland, Miller and Brian Calabrese.

Chad Jeseo brought out a new car and notched his first win of the year in the 25-lap pro stock feature. In recent weeks, Jeseo has been campaigning his Lebanon Valley car at Malta after destroying his regular Malta ride on July 17. Luke Horning finished second and increased his points lead over Josh Coonradt, who was third. He was followed by Jason Meltz and David Emigh.

James Hinman Jr. earned his first career win in the 20-lap Haun Welding limited sportsman feature. Hinman started on the pole and opened up a huge lead, as the first 18 laps were run under green.

But a yellow with two to go put Ron Delease Jr. right next to Hinman, but Hinman wasn’t going to be denied, beating Delease to the finish line by .677 seconds.

The limited sportsman Dash for Cash, sponsored by Macson Industrial Services in memory of Kevin McMillen, was worth $300 and went to Dylan Madsen.

Al Relyea picked up his second win of the year in the 15-lap street stock feature. Relyea got the lead with five laps to go and led Jason Meltz and Mike Arnold under the checkered flag.

Jaxson Ryan won the 15-lap four-cylinder feature, taking the lead on lap four and then coming out on top of a duel with David Frame. Frame got completely sideways on a restart on lap 11 before gathering his car back in, but that miscue gave Ryan all the cushion he needed. Frame finished second, with invader Kerrie Hollenbeck third. Steve Ryan finished fifth overall and had the first single-cam car across the finish line.