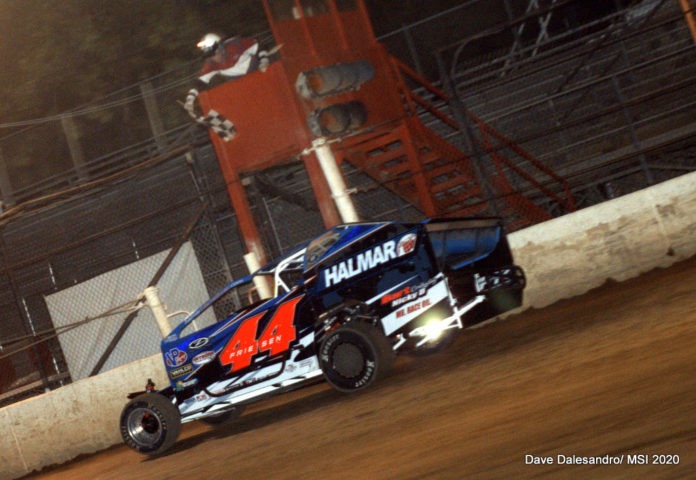 MALTA, NY – Is there any such thing as using up all your racing luck?

Friesen avoided getting involved in three separate incidents, used a lapped car to get past leader Ken Tremont Jr. and then walked off with his fourth win of the season in the 35-lap modified feature Friday night at Albany-Saratoga Speedway.

The victory was worth $2,500, thanks to bonus money put up by Bart Contracting.

Friesen’s wild night actually began in his heat race. Hoping to get into a handicapped position, Friesen quickly ate up ground, but was pinched into the inside wall on lap four, had to check up, and could only finish fifth, which put him 17th in the 30-car modified field.

Then things really got interesting.

On lap two of the feature, there was a chain reaction incident in the second turn right in front of Friesen, but he managed to avoid the incident without getting caught up in the chaos.

Then, on lap four, Rich Ronca got spun around by Brian Berger in the fourth turn, starting another incident. Both Ronnie Johnson and point leader Mike Mahaney couldn’t avoid contact with Ronca and each other, but Friesen cranked the wheel of the Halmar modified to the left, rocketed through the infield and got back on the track in turn one.

Peter Britten, who didn’t even complete a lap in the feature the previous week, used his eighth starting spot to take the lead on lap six, and one lap later, defending champion Marc Johnson, who has been on fire ever since switching to a Bicknell chassis, took over the No. 2 spot.

Tremont joined the lead group from his 10th starting position, and got a big jump on a restart to get the lead coming out of the fourth turn on lap 11.

Friesen was up to fourth by lap 14 and began to battle Britten for the No. 2 spot. On lap 20, they rocketed into the fourth turn, with Britten as high as he could go, and Friesen just inside. Just inches apart, Britten got up into the loose stuff and slammed into the fourth turn outside wall, while Friesen ducked away and took over third.

Tremont, Marc Johnson and Friesen then put on a whale of a show, with Tremont and Friesen hugging the cushion, and Johnson running the extreme inside. Friesen finally cleared Johnson on lap 24, and for the next couple of laps, he kept switching lanes, looking like someone trying to make up time on the New York State Thruway.

On lap 32, Tremont and Friesen were dead even coming across the finish line, with the lapped car of Berger looming right in front of them. Friesen cleared Berger first, and took the lead away from Tremont coming out of turn two.

Keith Flach brought out the final yellow on lap 33, but all that did was allow Johnson to get past Tremont for the No. 2 spot on the restart.

“I could keep pace with him,” said Friesen of his chase after Tremont. “The top of three and four was so good, but in one and two, he was holding me off. But when we got in traffic, I finally got him.”

“If I get the lead, I should win,” said Tremont. “The car just seemed to loosen up a bit. It was nothing major.”

Anthony Perrego, who was looking for the Madsen Overhead Doors/Flach Products Back-to-Back bonus, finished fourth while Matt DeLorenzo was fifth.

Mahaney came from the rear after his pit stop on lap four to finish seventh, allowing him to maintain the point lead.

Andrew Buff picked up his third win of the year in the 25-lap sportsman feature, earning $1,000, again with extra money put up by Bart Contracting. For the final 10 laps of the race, Buff had to battle Tim Hartman Jr. in a side-by-side showdown. A final caution with two to go gave Hartman his last shot at Buff, but Buff was ready, and held off Hartman by a bumper.

“I knew he was right there,” said Buff. “I just had to get a good restart and then hold my line. I thought I could hold him off.

Nick Stone recorded his fourth win of the year in the wild 25-lap pro stock feature, which also paid $1,000, courtesy of Ron Mensing and his Native Pride program.

Jason Meltz had opened up a huge lead in the feature before the field bunched up on lap 17 after a caution. On the restart, Meltz kept the lead but had Josh Coonradt right on his rear bumper, while Stone was running the low line.

A restart on lap 23 allowed Coonradt to take the lead away from Meltz, but he didn’t stay out in front for long, as Stone used another restart to drop Coonradt to second, with laps getting scarce.

On the final lap, Coonradt tried a slide job on Stone going through the third and fourth turns, but Coonradt ended up sliding right past Stone, who cranked the wheel to the left and beat Coonradt to the finish line by .0263 seconds.

“I knew Josh was going to do a slide job on me,” said Stone. “I just ducked back underneath him. That was a heckuva race.”

Scott Bennett Jr. recorded the first win of his career in the 20-lap Haul Welding limited sportsman feature. Bennett started on the pole and led all 20 laps of the feature, which was slowed by just one caution. Bennett, who was involved in a vicious wreck with Jared Powell three weeks ago, beat Taylor Wason to the finish line by almost two seconds. Competing the top five were Shane Larman, James Hinman Jr. and points leader Bryce Breault.

Jeff Meltz Sr. picked up the win in the 15-lap street stock feature. Matt Mosher came off the pole and set the early pace, until he spun out on lap 6, putting Mark Burch on the point.

Meltz took the lead for good on lap 10, and then had to battle both defending champion Al Relyea and a bad push during the final laps of the feature. Meltz and Relyea went into the night tied in the points race, so the victory put Meltz in the No. 1 spot.

Jaxson Ryan drove to victory in the 15-lap four-cylinder feature, holding off a late challenge from David Frame. Greg Malloy had the first single-cam car across the finish line, recording his first division win of the season.