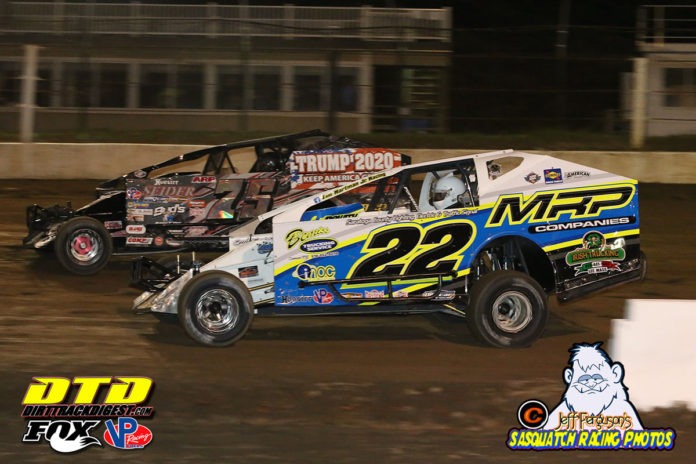 Leading the opening 24 laps of Tuesday’s DIRTcar Sportsman Modified feature presented by Racing Electronics, Krentz of Lockport, N.Y. had successfully survived a handful of challenges until the final restart of the race decided it all at Albany-Saratoga Speedway.

Charging from 12th, Hartman Jr. of Niskayuna, N.Y. rekindled some of the patented ‘Malta Magic’ created by he and his father, Tim Hartman Sr., to ace the final restart and drive around the outside of Krentz for the race lead. The decorated 27-year old took care of business for six more circuits before taking his No. 22 to the checkered flag to claim night one of OktoberFAST presented by Bart Contracting.

For Hartman Jr., who sits second on the all-time Albany-Saratoga wins list behind his father and just wrapped up his second career track championship at the Malta, N.Y. 4/10th-mile, Tuesday’s win was an extra special one coming against such a stout 55-car field.

“Even with this being our home track and everything, it’s so different racing against all of these guys,” Hartman noted in victory lane. “We didn’t time trial well at all, but we kept making adjustments and never gave up. It just shows how great this race team is. We had some lanes open up at the right time and once I got to the front it was just about minimizing my mistakes to make sure I didn’t give it away.”

Before Hartman added to his family legacy at “The Great Race Place,” all eyes were glued to Krentz at the start of the 30-lapper. Redrawing the pole position after his heat win, Krentz piloted his No. 56 to the point and padded himself a healthy lead by the halfway mark, even after surviving a pair of restarts. However, with ten laps left, the heat was turned up and a three-way battle for command surfaced.

While Krentz meticulously bided his time around the low line, unbeknownst to him, a pair of high-side heroes were running him down and hungry for the top spot. Winding it up and founding their momentum in the latter stages, Travis Bruno of Morrisonville, N.Y. brought Hartman with him to the front as the duo prepared to surprise Krentz in the closing laps.

Krentz, who finished fourth in this year’s DIRTcar Sportsman Modified points at Land of Legends Raceway (where OktoberFAST races on Saturday), held off their initial attempts at the lead until the final caution set up a lap 24 restart with Hartman to his outside. From there, they say the rest is history. Hartman nailed the restart and drove away into the Malta night while Krentz slipped backwards and a dream night fell through his grasp.

With Hartman driving off to the $1,000 victory in the OktoberFAST opener, he set the stage for a potential three-peat when he returns to the DIRTcar Sportsman Modified Series on Thursday night at Fulton Speedway and Sunday night for the OktoberFAST finale at Weedsport Speedway.

Another familiar face at Albany-Saratoga rose to the occasion behind Hartman as Andrew Buff of Latham, N.Y. presented a late-race rally to finish in the second spot aboard his No. 92. Recovering from a rough final restart on lap 24, Bruno rebounded after he slipped to fifth and drove his No. 33R back to a podium placing in the third spot.

Krentz fell back to finish fourth at the conclusion of the 30-lapper, while Mike Fowler of Fulton, N.Y. rounded out the top five. Closing out the top ten in Tuesday’s DIRTcar Sportsman Modified feature was Bobby Flood, AJ Miller, Brandon Carvey, Walter Hammond, and hard charger Brian Calabrese in tenth-from-29th.

The DIRTcar Sportsman Modifieds presented by Racing Electronics will sit on the sidelines on Wednesday before resuming their five-race slate this week on Thursday night at Fulton Speedway.