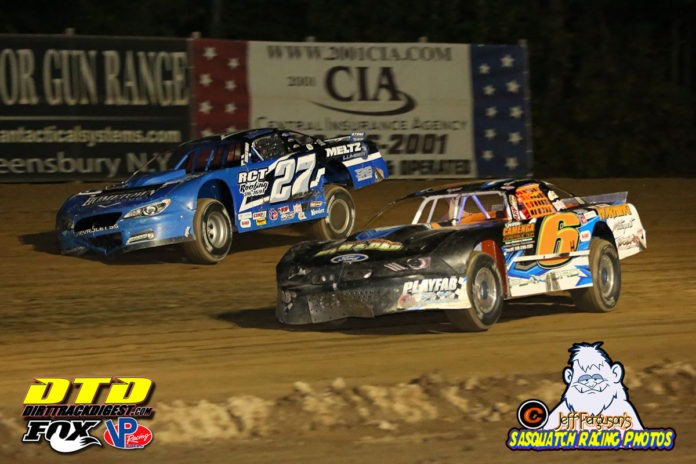 MALTA, NY – Sometimes, the most effective way of getting to the front is by paying attention to the cars you pass on the way up. Nick Stone did exactly that en route to his Feature win in the opening round of DIRTcar OktoberFAST Tuesday night at Albany-Saratoga Speedway for the DIRTcar Pro Stock Series presented by COMP Cams.

While most drivers would prefer to start within the first two rows, Stone, of Schenectady, NY, had a different outlook on his Feature grid placement.

“I started seventh, which is actually a good starting position,” Stone said. “You can kinda see what guys are doing, moving around, see who’s finding the fast lanes. So, I picked-off cars when I could, stayed behind a couple and watched what they were doing.”

This played right into Stone’s hands, as he was able to get in behind the other fast cars in front of him for the opening laps and search for the fastest route around them. Which, by Lap 9, he had already found and exploited.

Stone took a steady climb up to the font, passing about one car per lap while favoring the low side of the 4/10-mile. A caution flag on Lap 5 set him up for a push on the high side, which he took advantage of immediately, making the pass to break into the podium on the restart.

Scott Townslee, of Manchester, VT, had taken point and saw his slim lead vanish as Stone continued to reel him in on the top side. Before long, Stone had wound-up all the momentum he needed on the top to make the pass for the lead on Lap 9.

Another caution flag on Lap 13 waved, re-stacking the grid and igniting an intense battle for position between current Hoosier Racing Tire Weekly Championship frontrunners Luke Horning, of Gloversville, NY, and Josh Coonradt, of Saratoga Springs, NY. The two battled for several consecutive laps, swapping the third and fourth spots back-and-forth until Horning was able to muscle the spot away for good on Lap 19.

Both drivers got by Townslee shortly after to advance into the podium. But after crossing by the two-to-go signal from starter Dave Farney into Turns 1-2, both drivers would soon rather have the moment back.

Horning and Coonradt drove into the corners as planned, but soon found themselves facing the wrong way, over the edge of the baking. The caution flag waved, and both drivers turned their machines around and dipped into the pits. They did return back to the track, but only to be met with 21st and 22nd-place finishes.

This opened the door for Devon Carmenga, who drove up from 15th, and Townslee again to claim the remaining podium spots.

Now with his two biggest threats for the lead out of the picture, Stone set his #27 on cruise control and led the field back around to the checkers to collect the $1,000 check in OktoberFAST’s opening Pro Stock Series race.

Depsite the misfortune to his biggest competition behind him in the closing laps, Stone didn’t really seem to feel the heat from Horning or Coonradt back there anyway.

“This track has been known to change by the end of the race, and that’s when you think you’re in the fast lane,” Stone said. “Nobody really challenged me; I might have heard a little motor as my quarter-panel for the first lap or so on the restarts, but I didn’t hear anything right up alongside my door, so I figured I was good.”

Stone will be one of 32 Pro Stock drivers in the pit area for Wednesday’s throwdown at the Utica-Rome Speedway – a track commonly noted for its slick conditions. But Stone says he’s hoping for slick surfaces all week, so he can dial his car in similarly each night he’s on the track.

“We were a little off and we’re gonna tweak on it,” Stone said. “I know Utica usually gets a little slick, so I think going in tomorrow we’ll probably set the car about what it’s at now and make a couple more changes.”

Don’t miss round #2 of DIRTcar OktoberFAST from the Utica-Rome Speedway on Wednesday, Oct. 7, featuring the DIRTcar 358 Modifieds and Pro Stocks running alongside the headlining Super DIRTcar Series Big Block Modifieds. Catch all the action live on DIRTVision!