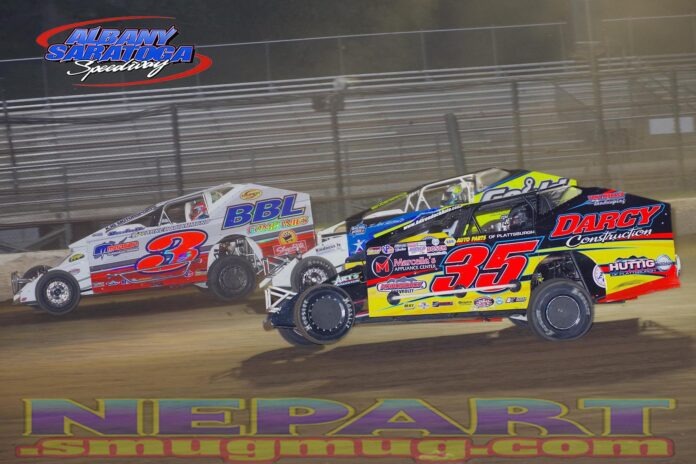 MALTA, NY – Most promoters probably don’t want to think about the 2020 racing season.

Because of the coronavirus pandemic that wreaked havoc across the Northeast, most tracks ran limited schedules; others didn’t open at all. Fans had to get accustomed to watching racing from home, and restrictions at the tracks that did run included temperature checks, facial coverings and contact tracing.

Albany-Saratoga Speedway became an oasis in the pandemic wasteland in 2020. Under the direction of promoter Lyle DeVore, and with the help of a dedicated staff and some very generous corporate sponsors, Albany-Saratoga completed a 14-week schedule, running five divisions every Friday night, giving drivers and owners alike the weekly diversion they needed to get through an uncertain summer.

With over 150 cars in the pits every week, DeVore opted to reinstitute his 50/50 raffle and every Friday night, one lucky ticket holder took home some extra spending money. In a normal year, the other half of the money collected would go into the drivers’ point fund, but 2020 wasn’t a normal season, by any stretch of the imagination.

But as it now turns out, DeVore was just building the foundation for his 2021 point fund.

“All the money we collected last year that would have gone into the point fund will be added to this year’s point fund,” said DeVore as he discussed plans for 2021. “Right now, we’re putting together a tentative schedule because we’re still not sure how soon, if ever, we’ll be able to have fans at the track in 2021. But I can tell you this. We want to have a point fund this year, and if for some reason we can’t, then all the 50/50 money we collected in 2020 that hasn’t been distributed will be added to the weekly purses. No matter what, the money we took in last year will end up in the hands of the drivers this year.”

Although the coronavirus pandemic changed the complexion of racing in the Northeast, there was nothing wrong with the quality of racing at Albany-Saratoga Speedway. The historic Malta track was one of the few to race continually on Friday nights, and thanks to its partnership with Dirt Track Digest TV, Albany-Saratoga made new fans throughout the Northeast.

Although Mike Mahaney and car owner George Huttig walked off with their first modified track title, the star of the show was NASCAR Gander Outdoors Truck Series regular Stewart Friesen. Friesen recorded a season-high six victories, making Albany-Saratoga his Friday night home when he wasn’t criss-crossing the country in the Halmar/Friesen Racing truck.

Mahaney won the first feature of the season on June 12, and then used a string of consistent top-five finishes to walk off with the title.

The list of modified winners at Albany-Saratoga in 2020 included Mat Williamson, 13-time champion Ken Tremont Jr., Matt DeLorenzo, Marc Johnson, 62-year-old veteran Don Ronca and Anthony Perrego. Perrego won the season-ending DIRTcar OktoberFAST 60-lapper to put the icing on the 2020 season. Perrego, who also won on Aug. 7, and Friesen were the only multiple modified winners in 2020.

Now, all eyes turn to 2021, and once again, there is an air of uncertainty hanging over New York race tracks. But when all the pandemic issues are ironed out this year, you can bet that Albany-Saratoga Speedway will once again be the Friday night place to be.

To keep up on the latest developments at Albany-Saratoga Speedway, check in at the track’s website at www.albany-saratogaspeedway.com or become a “friend” on Facebook.