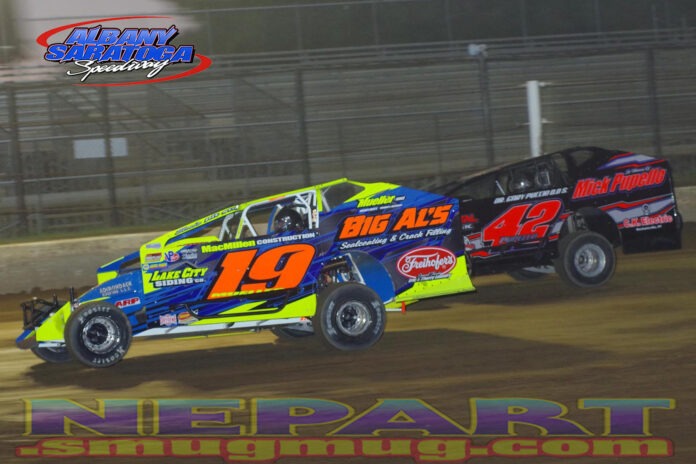 MALTA, NY – Everyone knows that fans are the backbone of dirt track racing … especially the ones who become sponsors.

Service Tire Truck Centers of Latham, N.Y. joined the list of corporate sponsors at Albany-Saratoga Speedway in 2020 and will return in 2021 with its popular STTC Dash for Cash.

The Dash is rotated between the modified, sportsman and pro stock divisions throughout the season, giving the top qualifiers from the heat races an opportunity to earn an extra $200 in the four-lap shootout.

The Dash was the brainchild of Frank Washburn, an account manager at Service Tire Truck Centers.

“My wife (Sandy) and I are huge motorsports fans, in general, and we got involved in sponsorship because we wanted to give something back to the drivers during these trying times,” he said.


“I’m an old-timer,” he added. “The dash for cash was always something I really enjoyed watching, so that’s what we went with. I didn’t know what the drivers would think about it, because it’s not really a lot of money, but they go out there every week and race hard in the dash, and we really appreciate that.”

Service Tire Truck Centers, which have been in business since 1955, specialize in sales and service of truck, agricultural and off-road tires, but also offer a wide-range of on-site mechanical services.