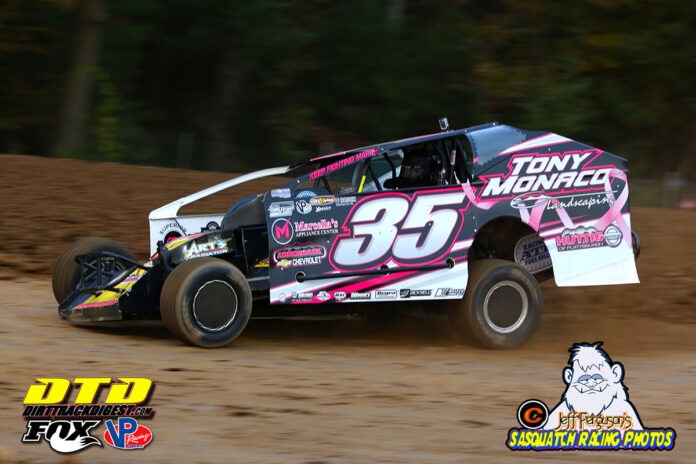 That was the question Hamlet pondered in one of Shakespeare’s most famous plays, and that is the question that Mike Mahaney has been bouncing around a lot since the end of the 2020 racing season.

Is it better to be a track champion at the expense of not being a multi-time winner?

In Mahaney’s mind, why can’t he be both?

Mahaney and car owner George Huttig teamed up to win the modified championship at Albany-Saratoga Speedway in 2020, and the 31-year-old driver from King Ferry, N.Y. will begin defense of his title when the historic Malta track opens its gates for 2021 in April.

The championship was extremely satisfying for Huttig, who began fielding cars at Albany-Saratoga Speedway in 1985, with Mike Perrotte behind the wheel. Perrotte put the meticulous Adirondack Auto-sponsored modifieds in victory lane on 18 occasions, but he and Huttig never won a title.

Mahaney landed the ride in the Huttig car in 2019, recording two wins at Albany-Saratoga that year, and needed just one more year to give Huttig and his wife Julie their first crown.

But along the way, Mahaney won just one race, the season opener at Albany-Saratoga on June 12. When the season ended, Mahaney had one win in 47 starts overall.

“Some of that was my fault,” Mahaney said in a recent interview. “I was running toward a track championship and not concentrating on getting more wins. I was happy with good finishes. Part of that was financial. I wanted to keep the equipment together.

“The handicapping was also a big obstacle to overcome,” he added. “It’s very challenging to get through the field and get through quickly. Most of the races at Malta last year were regular distance races, and that doesn’t leave a lot of time to come up from 15th or 16th place.”

After winning the opener at Albany-Saratoga, Mahaney went on to chalk up six more top-five finishes, including a second to Anthony Perrego in the DIRTcar OktoberFAST race on Oct. 6. He only finished out of the top 10 once (an 11th on June 26) and locked up the title with a 10th-place run on Sept. 4.

He was also one of the most dominant drivers in the five-race OktoberFAST series, but again, didn’t get a win.

So, obviously, consistency paid off, but this year, the focus will be on winning races.

“This year, I’m going to be more aggressive and go after more wins,” Mahaney admitted.

It will be hard to find a team that’s more prepared in 2021 than the Adirondack Auto team. They passed up the DIRTcar Nationals in Florida in February to stay home and keep working on their Bicknell cars.

“We’ve had a lot of time to prepare,” said Mahaney, who will once again be running Skip Seymour motors under the hood of the No. 35, which will also carry sponsorship from Tony Monaco Landscaping, Marcella’s Appliance Center, Huttig Nissan and NAPA Auto Parts. “Typically, you feel like you’re in a rush as you get closer to starting the year, but I feel like we’re extremely prepared. I feel like there are a lot of little details we can improve on. I’m really excited for this season to start.”

Mahaney doesn’t like to plan out an entire season too early (“There can always be a what if,” he said) but he is hoping that many of the restrictions that were associated with the COVID-19 pandemic in 2020 are lifted sometime this season.

“Hopefully, we can run a lot more races than we did last year,” he said. “We didn’t get a chance to run a lot of big races

Despite winning the Albany-Saratoga title last year, Mahaney and Huttig never really got a chance to celebrate, because the track couldn’t hold its season-ending awards banquet.

“It hurts that we didn’t do a banquet,” Mahaney said. “I had a tremendous time at the banquet the year before and I didn’t even win. By not having a banquet, I didn’t get a chance to thank everybody who helped us accomplish that (winning the modified title).”

To be a repeat champion? That is another question yet to be answered.