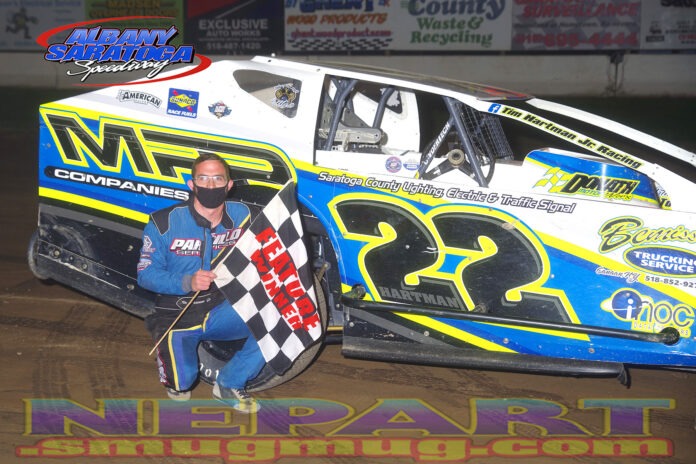 MALTA, NY – A lot of drivers don’t like to set goals for an upcoming racing season, instead falling back on the old “We’ll take it one week at a time.” disclaimer.

Not Tim Hartman Jr. The defending sportsman division champion at Albany-Saratoga Speedway is heading into the 2021 season with his sights on a big prize.

“I only need five wins to be the all-time sportsman winner at Albany-Saratoga,” said Hartman. “I want that.”

So when the gates open on April 16, Hartman Jr. will be in his usual spot in the Albany-Saratoga pits, ready to defend his title and continue his quest for the all-time record.

Hartman Jr. chalked up five wins in the COVID-19 pandemic-shortened season, pushing his total to 28, and passed his father Tim Sr., who had 25 career victories, on the all-time win list in the process.

Now, the only person sitting between Hartman Jr. and the top of the all-time win list is Mike Ballestero, who has a total of 32 wins during his career, which resumed a couple of seasons ago after a long retirement.

With Utica-Rome Speedway switching to Friday night racing for 2021, there had been some speculation that Hartman might consider a change of scenery. After all, there was no love lost between the Mike Parillo-sponsored Hartman Racing Team and management at Albany-Saratoga during a tumultuous 2019 season, which saw the Hartman team symbolically take down their pit sign at the end of the season.

But an offseason dinner with track promoter Lyle DeVore helped smooth out the problems and Hartman Jr. was back in his usual spot in 2020.

“Things were better for us last year, as far as our situation,” said Hartman. “I felt better about racing there last year.

“As far as going to Utica, that’s not bad once or twice a year. But that’s two hours from my house (in Niskayuna, about 30 minutes from Malta) and that’s not something I wanted to do on a weekly basis.”

The big news surrounding the Parillo/Hartman team for 2021 is a switch to the DKM chassis. Hartman Jr. had been a strong supporter of Troyer chassis after spending the first part of his career racing his father’s old TEO cars. The DKM team had tried to get Hartman in one of their cars for 2020, but the deal never materialized. This time around, they came to an agreement that suited both parties.

“We’ll be fine,” said Hartman Jr. when asked about the transition “We knew we needed new stuff to stay competitive in sportsman. We had three cars that all had about 100 races on them. Troyer didn’t really seem to want to help us, so we made the switch.

“We just put the cockpit together and it sits the same as a Troyer,” he added. “The biggest jump for me is that I’ve never run coils. That will be more of an adjustment for me.”

Had things fallen his way, the 27-year-old Hartman Jr., an engineer at Knolls Atomic Power Laboratory in Niskayuna, would be heading into the year looking for his third straight title. He won his first championship in 2018, beating Connor Cleveland by six points.

Then, in 2019, he went into the final weeks of the season with a pretty comfortable lead over
Cleveland before things unraveled.

On the night of Aug. 23, Hartman’s car took a hard hit in the rear end on the first lap and he made an early exit to the pits, finishing 28th and giving the points lead to Cleveland.

The next week, trying to get the points lead back, Hartman blew the rear end in his car while battling for the lead with three laps left in the feature. That second straight DNF was too much to overcome.

But he bounced back strong last season, crushing Cleveland by 79 points, and Hartman Jr. can’t wait to get 2021 started, despite the uncertainty of a different chassis.